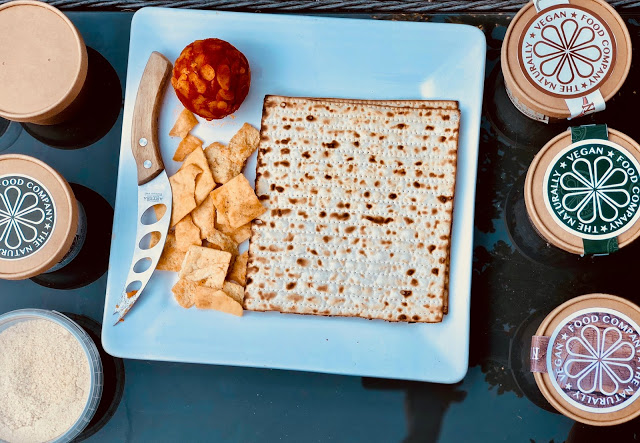 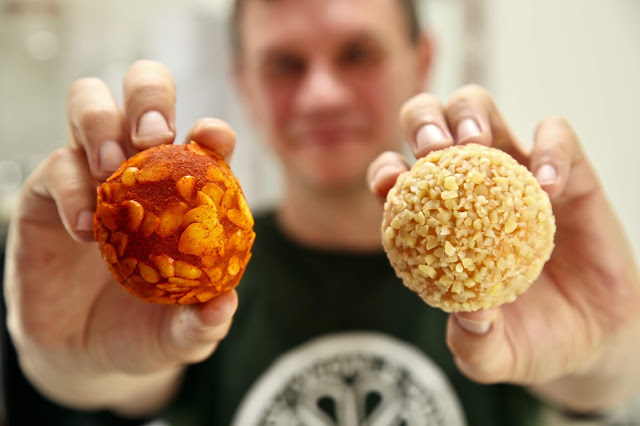 Despite sounding like a contradiction in terms, vegan cheese is improving all the time. I even served Minister for the Environment Michael Gove and his wife journalist Sarah Vine a vegan cheese board when I catered a supper club for them at the end of last year. They were pleasantly surprised. At the moment the Naturally Vegan Food Company makes four cheeses:

Jonny is originally from Manchester but when he met his long term girlfriend Zareen, he moved down to Northampton. I visited him at his kitchen in Northampton and asked: What started him working in food?

I got a job at The Cheese Hamlet in Manchester and got really passionate about cheese. But I became vegan after a trip to India, which really inspired me. My girlfriend Zareen became vegan in the ’90s then, motivated by the badger cull, she went completely vegan in 2010.Which meant I went completely vegan in the house. We obviously had to make meals that both of us could eat. Then I gradually went vegan all the time.

Is that because Zareen served vegan food?

Actually, I do most of the cooking.

Jonny made a fantastic vegan dinner and breakfast while I stayed with him, using local vegan products. There is a whole host of small producers in the vegan world but the supermarkets are starting to wake up to this demand. Jonny comments:

Was it difficult to set up the business? How did you come up with pricing?

I looked at other artisan cheese makers and went under their price so my cheez ball is £5.75. I wanted it to be quite accessible for everybody. Not a lot of people can afford lavish cheese. We also do a £26 cheese selection box, with all four cheeses, including delivery. It was an unbelievable seller at Christmas, and in the Yumbles top ten products. It’s been mentioned in the Guardian and the Independent.

From a non-chef point of view, how did you learn how to make a vegan cheese?

I experimented. I went and looked at an American site The Modernist Pantry had a cheese-making process. I made about 100 cheeses. I did the market research and changed the product to what people wanted. It did hit a sweet spot – there’s a need for more vegan cheeses.

Your cheeses are all very flavoursome.

You could use the creamy cashew spread on a jacket potato or in a bechamel sauce. You could add tapioca flour to it, to make it more stringy. You can cook with it if you use a low temperature.

I love your vegan parmesan.

It’s nutritional yeast, cashews, garlic powder. I’ve had an Italian guy who was passionate about his parmesan and he endorsed it. Sprinkle it on at the end.

When I was writing V is for Vegan, I made about 12 different cheeses. I prefer the nut cheeses to the coconut.

Everybody says that, yet there is a big market for the coconut-based cheeses.

The mouthfeel isn’t great on coconut-based ones. There are three basic types of vegan cheese so far: nut cheese, coconut butter cheese and soy cheese. Have you had recipe development?

No, I just worked on it myself. There was a bit of trial and error. With the original cheese ball, it wasn’t selling, then I added tomato powder to it, which made it sweeter, and it started selling well. It’s all about pumping up the flavour.

With the chilli ball, it was too hot for people at first. We had to calm that down.
You eat it and then ten seconds later you get the chilli. We added more oil, then the oil sits on your tastebuds and dilutes the chilli.

You were literally in your kitchen, playing around with all these ingredients, just working it out. Jonny, this is your business, right?

It is but Zareen helps me out.

Jonny’s house is full of various types of packing material, ingredients and cool boxes. Plus a postage franking machine. With those little gel packs it can stay cool for 48 hours. You sell most of it through Yumbles online?

Yes. We aim to deliver the next day in most of the UK. For certain parts of Scotland, it’s two days but that’s like 5% of our deliveries. If you spend over £20 then you get free delivery. So for the taster box, it’s free delivery.

Have you got it in any shops?

Friendly Foods in Wolverhampton. The Daily Bread in Northampton. We are looking at Glasgow.

Where do you get your ingredients? Do you buy in bulk? Though I’ve noticed sometimes it’s actually cheaper to buy in the supermarket.

Yes, it’s been trial and error. For instance, the mustard. If you try those two mustards, they are completely different. Powder isn’t as good as French mustard. We use fresh, not powdered. I use a mild French mustard, sweet and tangy.

It’s very interesting to hear all this, the process.

Partly it’s health and safety, I have to get in touch with my suppliers and have products certified as fit for consumption. It’s easier with high street supermarkets.

I don’t really buy from bulk anymore. I was buying big tubs and there was loads of husk. Now I buy my cashews from Lidl.

I was buying 25 kilo tubs, but the quality wasn’t there.

Also nuts go off very quickly. I found when I used to buy big things of pine nuts and cashew nuts, they went off. I keep them all in the fridge. Especially pine nuts. Has anyone made a pine nut vegan cheese?

You could make little ones.

How many cheeses have you sold so far in two years?

At Christmas I sold over 1,000 cheeses all sold in that kitchen. I had to get me cool boxes, and kept them outside.

It’s like my home restaurant in winter: I use the outside as a fridge.

We need to do a vegan cheese and wine evening. I work with winetrust100.co.uk who do a lot of vegan wines.

What are your goals now?

Jonny is pretty clear on this:

You and Zareen’s vegan thing is about animal welfare and the environment?

I’ve always liked animals. My family are big animal lovers. She does a lot of work for animal sanctuaries, fundraising.

Does she want to join you in the business eventually?

Yes. I don’t like to push the animal rights thing… I go for a gently gently approach, or people switch off.

I agree. I think the best way of spreading the message is making delicious food. Is there anything you miss?

Buy it at Yumbles.