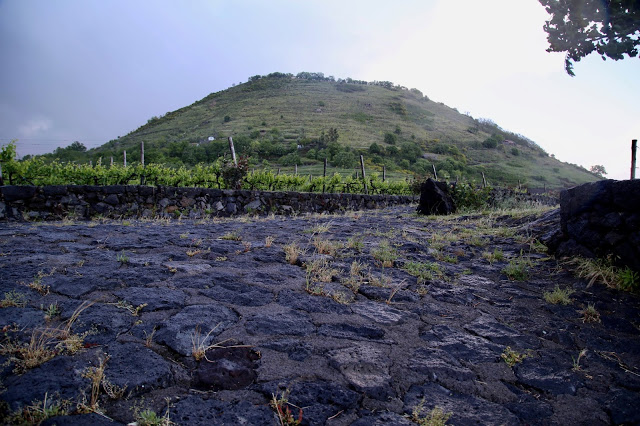 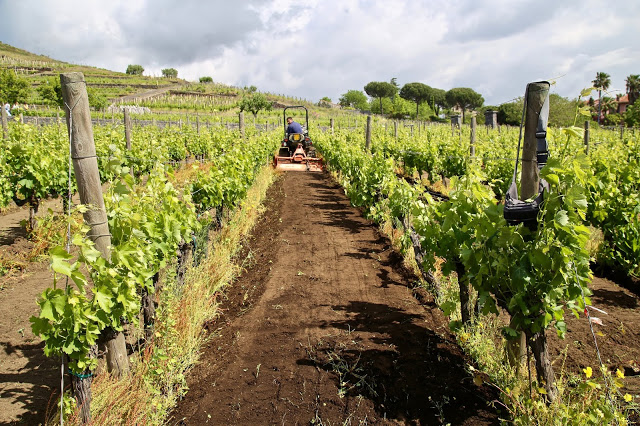 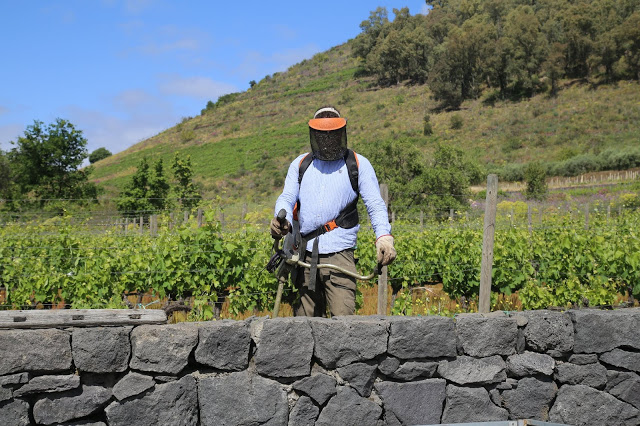 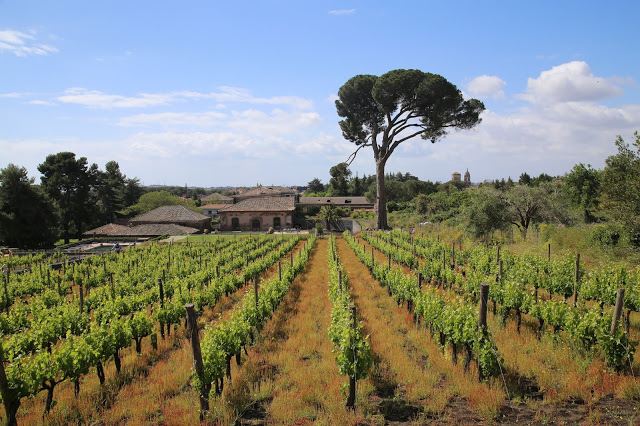 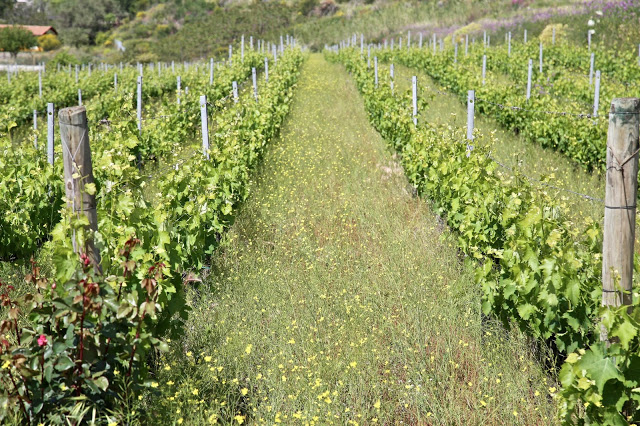 Despite the fact that grapevines thrive best in poor soil, vineyards are situated in some of the most beautiful scenery in the world. In Sicily, I saw fields where windswept vines are shaped like bushes, (often held down by stones); I saw vines that resembled the elegant branches of a harp; others that threaded along a wire in orderly rows like soldiers.  I could also see the influence of the natural wine revolution on traditional winemakers: whereas vineyards used to be tidy and regimented lines without weeds, now wild flowers grow abundantly between the tiers of vines.

The island boasts 76 cultivars of grapes; some, like Grillo, Nero D’Avola, Zibbibo, Catarratto, Carricante and Perricone (the antecedent of Marsala wine) only grow here.
The soil too, is varied: 12 kinds, from jet volcanic pumice to red clay schist, chalky limestone cliffs or ochre sand. Around Mount Etna is probably the most visually arresting; even olive green foliage pops when the background is black.

Harvesting in Sicily, due to these diverse geographical conditions, is a long season, stretching from August to November. Picking starts early in the desert heat of the interior, mid-season where there are saline breezes near the coast, and late at snowy altitudes around Etna.

Sicily produces more wine than New Zealand, and almost as much as Australia. Two hundred wineries produce almost 60 million bottles. For a place with little industry, and high unemployment, almost double the mainland rate, the wine business provides employment for 7000 people. Not bad for an island off the coast of Italy. It is however the largest island in the Mediterranean and bigger than Wales.

Sicily, after Georgia, has the second oldest wine culture in the world; recent research shows they’ve been growing wine since 4000 BC. Scientists discovered this by scraping sediment from shards of pottery found in a hidden cave.

The history of Sicily, due to its location at a naval crossroads in the Mediterranean, encompasses every empire and colonising urge, from the Phoenicians, Greeks, Romans,  Vandals, Arabs, Normans, Spanish, British and now the Italians.

Time functions differently on this island: ancient and new linger cheek by jowl. The way Sicilians, especially the Planeta wine family, talk about the Roman Empire, it could have been yesterday. This impression was repeated when Valentina Bruschi, an art history guide who gave us a speed-walking tour of Palermo, airily declared that 18th century baroque is considered modern art in Sicily.

There is still some resentment against the Romans for ripping out all the vineyards (2000 years ago!) and replacing them with wheat fields.

‘We were the bread basket of the empire’ bitterly lamented one wine family scion, Vito Planeta.

Memories are long. Likewise, the removal of anything pertaining to Greek culture. As always, the new empire had to wipe out the traces of the previous one.* 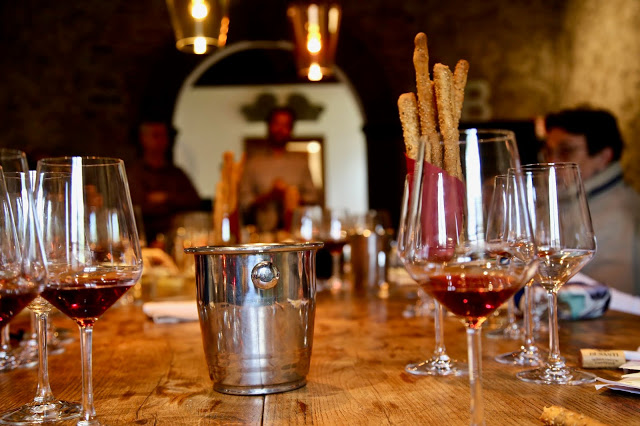 A wine trip, while a great pleasure, can also be an intimidating experience. While not an expert, I want to learn. I know how to taste. I sniff deeply, plunging my nose deep into the glass, sometimes leaving a mark on the bridge of my nose. I’ve learnt to swirl my glass without slopping the wine over the edge.
When surrounded by experts, I sometimes wonder if I have the right to speak or ask questions  but then I think what the hell and ask away. There is no such thing as a stupid question right? I’ve learnt to trust my instincts. There are no ‘right’ opinions.

On this trip, I was with 85 journalists from all over the world; the majority were wine experts. Some had very specific interests: one international journalist only covered Italian wine, no other region. Very few came from the UK:

The winemakers were all delightful: warm, friendly, generous, happy to share their knowledge. As were the sommeliers from the Associazione Italiana Somelier, impressively dressed in black frock coats, white shirt and black bow tie, with silver ‘tastevin’ or tasting cup hanging down on a heavy metal rather ‘mayoral’ chain. They guided my tasting choices and I got to taste some truly incredible wines. 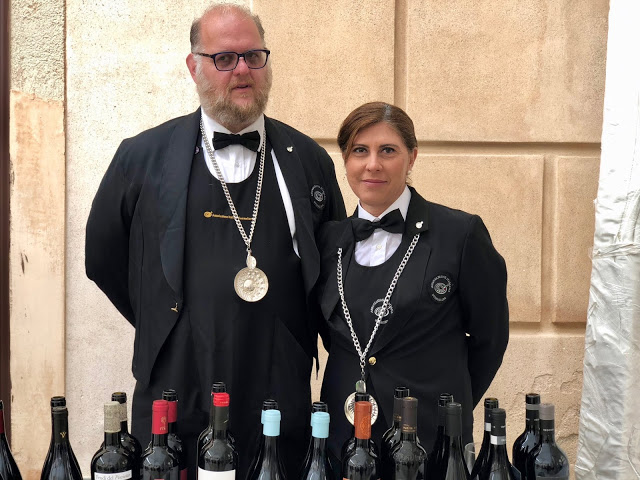 What is ‘en primeur’?

En primeur means ‘at the beginning’.  You taste very good but very young wines and the idea is to predict how good they will be in a few years time. It’s the wine version of a ‘futures’ market.

I’d heard of Bordeaux ‘en primeur’ but now almost every region has an en primeur event. Bordeaux remains the most important of these markets.

En primeur is an opportunity to buy wine before it is bottled, in order to get it at a reasonable price. This is very necessary in the case of Bordeaux, but I’ve heard complaints that now even the en primeur prices are beyond anybody but bankers and Chinese investors. 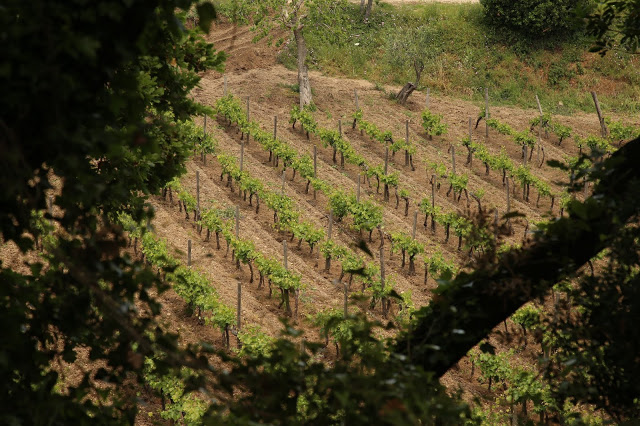 At the start of the trip, our group visited wineries around Etna then moved onto the Aeolian islands.

Refined wine is fairly recent to Sicily: it was only around 35 years ago that a new wave of winemakers and cantines started to improve and produce fine wines. The wine industry, as in much of Europe, was devastated by the phylloxera wipe-out in the mid 19th century. From that era until the 1980s/90s, the regional wines were either ordinary table wines or had been used to bulk out mainland Italian wines.

Sicily used to be known for red wines, drunk young. Now white wines, particularly in the west of Sicily are gaining renown. This is my tour of the land of the Cyclops around Etna. 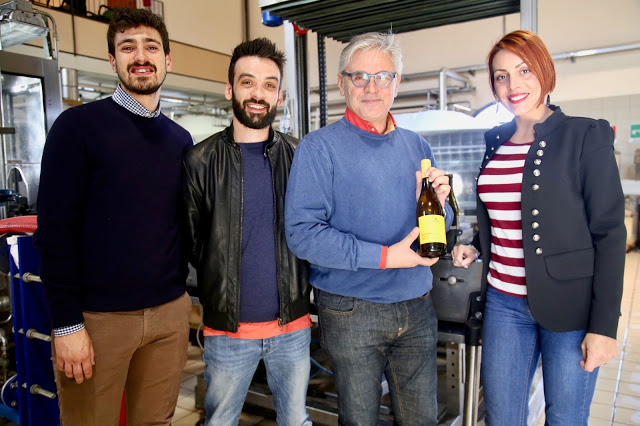 This was the first winery we visited, part of a large group- Cantine Europa. I started to hear, for the first time, the names of Sicilian grapes that, to be honest I’d never heard of: Cattarratto, Zibbibo.

In the old days Grillo wine used to be be yellow, oxidised and full-bodied: winemakers struggled to control the fermentation. But now Grillo is growing in popularity as a dry white wine.

I tried the Spumante Due Sorbi, which was citrussy, acidic, mineral, as you’d expect from volcanic soil, salty and fresh, with small bubbles. Grapes are picked early, in August. Perfect with seafood.
I also tried their Eughenès range: Catarratto Lucido, Grillo, Syrah-Nero D’Avola ’15 and ’16, and Perricone. 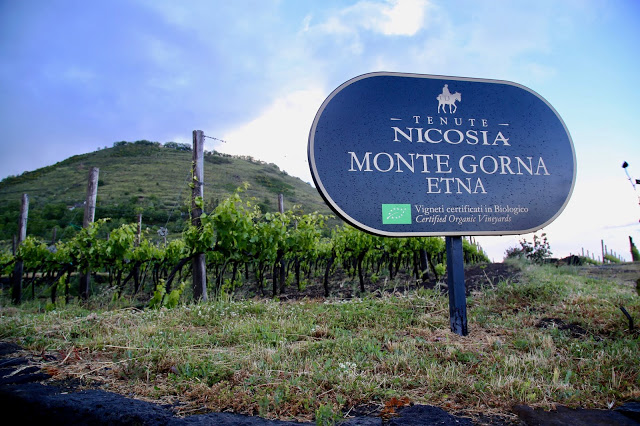 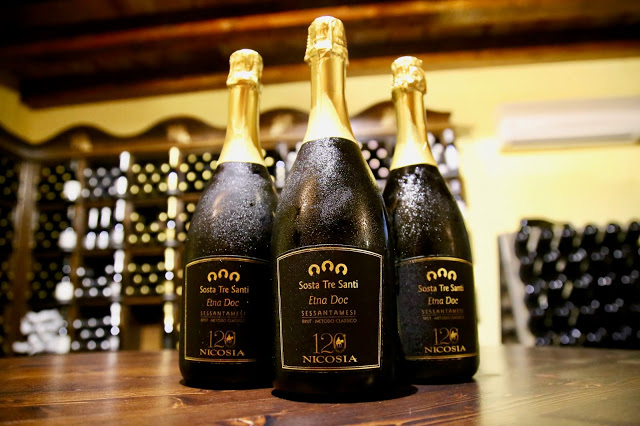 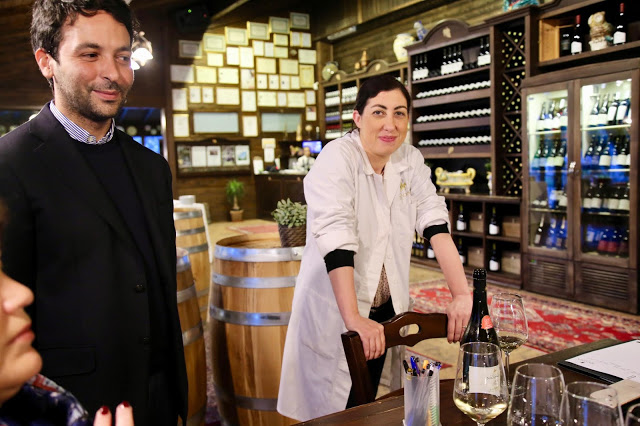 Visiting the Nicosia vineyards at 750 metres of altitude, where it sometimes snows, at the foot of an extinguished crater around Mount Etna, I was almost blown to the ground by the wind. I eyed 60 year old espalier vines, stunning against the pitch black charcoal undersoil. This is the rainiest area in Sicily.

This winery also benefits from a beautiful shop, restaurant (incredible olive oil) and cellar while boasting one of the few female winemakers in Sicily, Maria Carella.

I tried Fondo Filara Bianco ’16 (beer notes, sharp, mineral), Etna Bianco ’13 and Fondo Filara Etna Rosso ’14( liquorice, cocoa, ruby colour), Etna Rosso ’12 (lavender, black cherries, a little smoke, lovely).
When you get to taste vertically (that is, the same wine but preceding years) it gives you the chance to see how the young wines en primeur might develop. 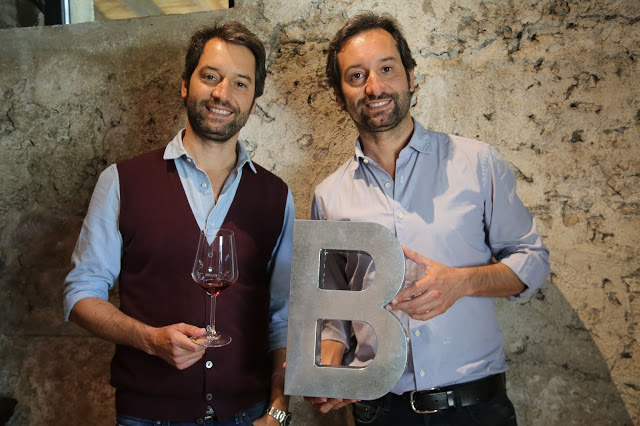 Founded in 1988, Benante is one of the first wineries in Sicily to make fine wine. The father of these boys was a banker who risked everything to become a wine maker. His sons, brothers Antonio and Salvino Benante, are continuing his tradition. 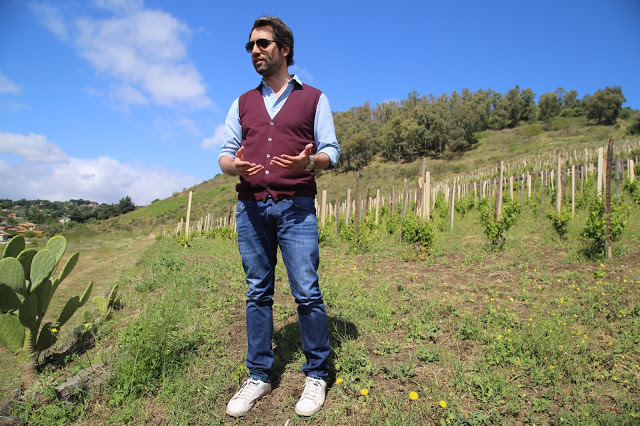 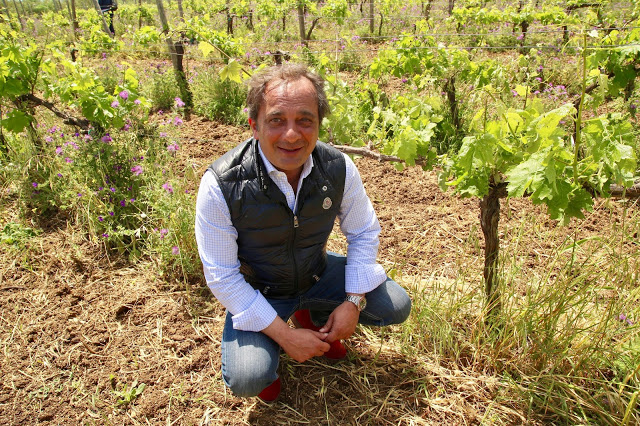 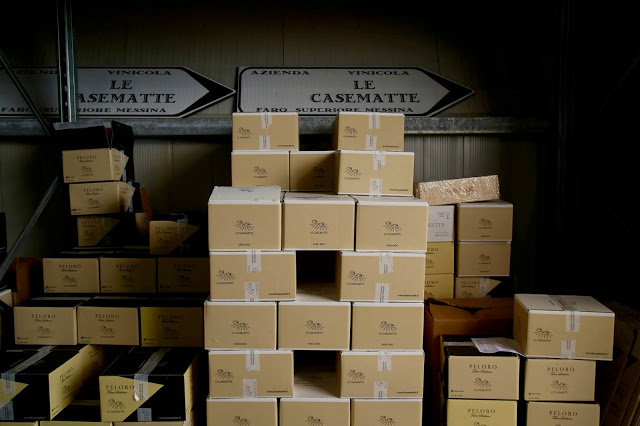 On a balcony overlooking vineyards, I tried the wines of a former accountant Gianfranco Sabbatini, who 20 years ago decided to pursue his dream of owning a winery. Le casematte winery served us Rosematte ’14, a sparkling rosé and Peloro Bianco ’17, named after the tip of Sicily from were you can see Calabria on the Italian mainland.

Our group then took a hovercraft boat to the islands, stopping off at Stromboli and the marvellously named Vulcano, which, even at the docks, smelled strongly of the sulphuric fumes from the volcano and onto the dreamy and fragrant island of Salina. 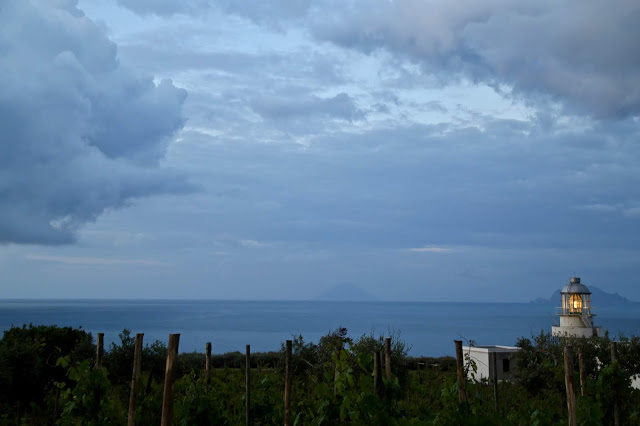 Salina is the greenest of the volcanic islands around Sicily. I stayed at the 5 star hotel, Tenuta Capofaro owned by the Tasca wine family. The view from my room was magical: I had a lighthouse in my front garden, which was lit at night, strobing the sea, Stromboli puffing away a few miles in the distance.

Breakfast at this hotel is one of the best in Sicily: the kitchen makes the yogurt, fresh ricotta, and preserves. Capofaro employs the award-winning Italian pastry chef, Gabriele Camiolo, to make the morning sourdough bread, pizzette (yes pizza is acceptable at breakfast in Sicily), cakes and doughnuts. It’s worth staying just for the bread.

I didn’t stay long enough to have dinner by executive chef Ludovico de Vivo, who uses pasta made from their own Regaleali wheat, (but hand-crafted at Gragnano), their own olive oil, garden grown vegetables and locally caught fish. 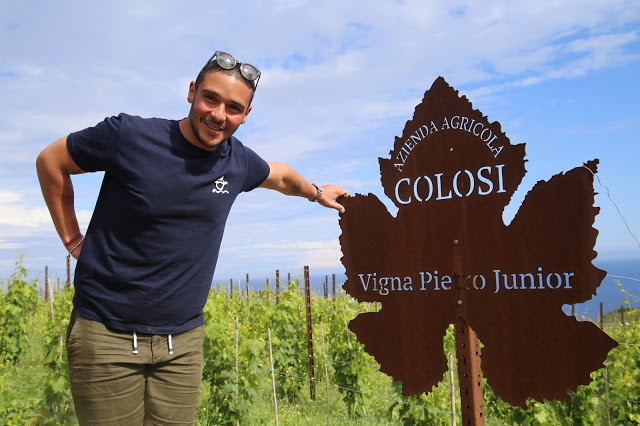 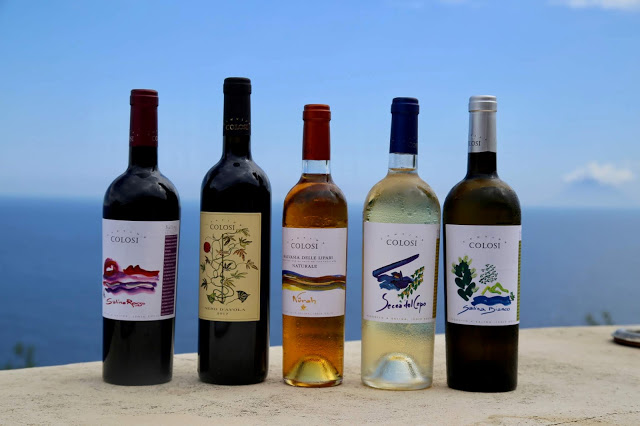 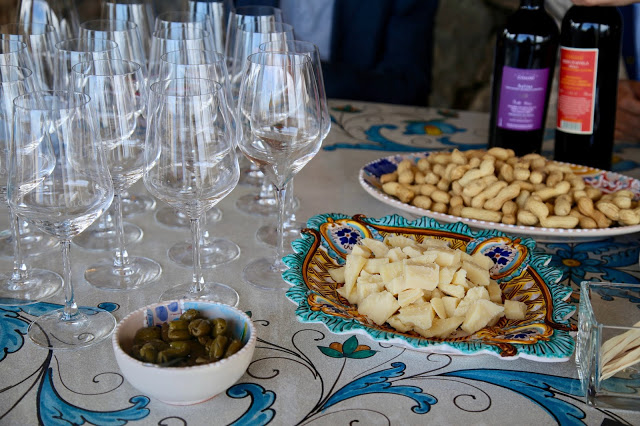 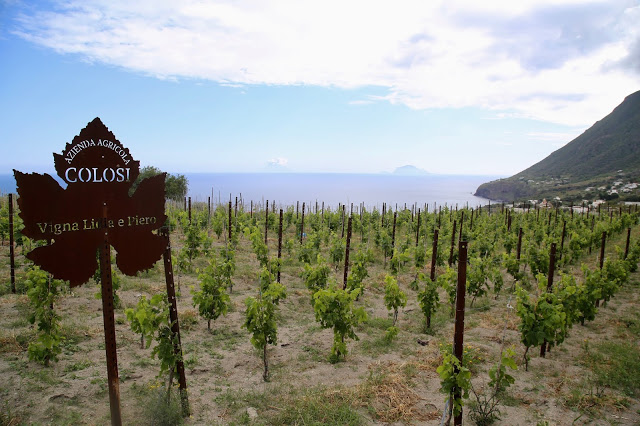 Colosi is one of the most beautifully situated vineyards, the deep blue sea framing the background, that I’ve ever visited. The family took us to a taverna for dinner the night before, where we were served an enormous fish baked in salt then spectacularly set on fire. welcomed us to their house.

The whole family invited us to their house the next day, where we were handed plates of home-brined local capers on toast, cheeses, home-cured olives and a leisurely paced tasting of their wines. Each member of the family had a sign in the shape of a vine leaf, bearing their names, in their own vineyards. 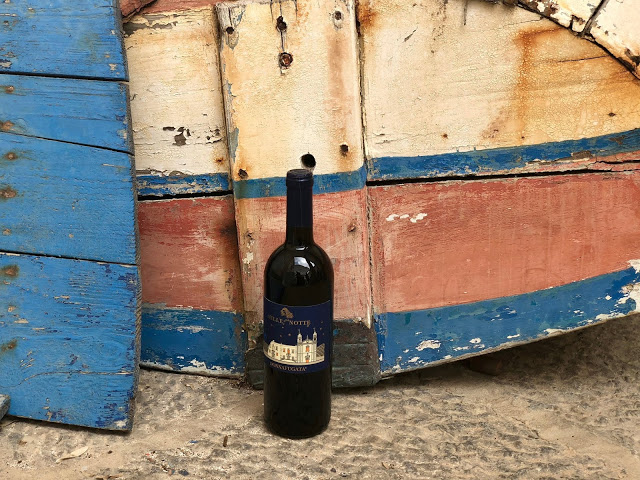 For the second half of the trip, we stayed in Palermo, at The Centrale Palace, all pink marble floors and a wonderful roof terrace. There were dinners, walking tours, masterclasses in wine and a conference.
One day was spent visiting ancient palazzos. Until you have the privilege of being invited to the homes of the seriously wealthy, it’s almost impossible to imagine just how rich they are. For example, one gilded and gorgeous palazzo, owned by the noble Florio wine family, had nine works by Damian Hirst in their front room.

After a Michelin-starred buffet meal by chef Tony Lococo of Ipupi Ristorante, I tasted some wines. My technique was to go up to the soms and say:

‘What is your most expensive wine?’.

Funnily enough I tend to like wines over £50 a bottle.

My favourite wines at this tasting were Mille e una Notte by Dona Fugata, a jeroboam of Canicatti Aynat and Costa Ghirlanda wines from Pantelleria. 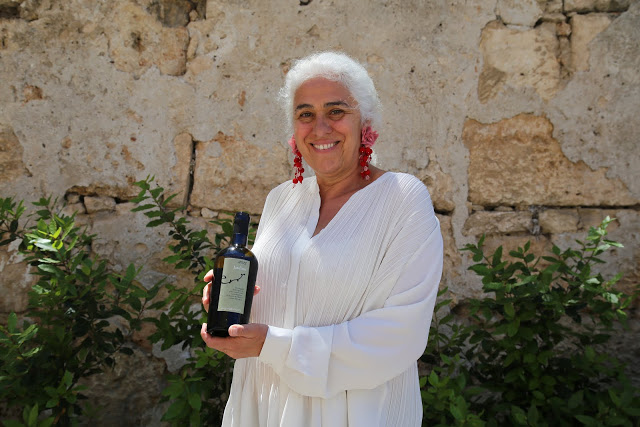 The wine world is full of characters such as the white-maned former basket ball champion, Giulia Pazienza Gelmetti of Costa Ghirlanda on the island of Pantelleria. 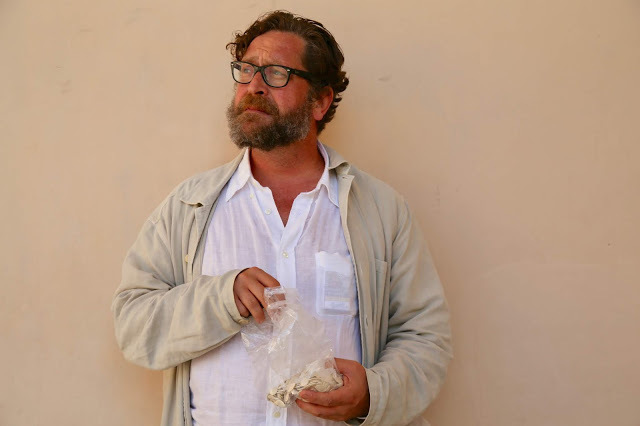 Vito Planeta, the eldest son in the Planeta family. His younger brother Alessio is in charge of the wine, while Vito makes money playing online poker for large stakes. Vito is one of those people who knows everything: from Roman history to how to use different aubergines, to British Corbynista politics. I thought he was pretty fanciable and wouldn’t it be fantastic to have Planeta as a surname! (Practise scribbling Mrs Kerstin Planeta…)

All the press gathered in the central courtyard of the Museo Riso for a wine panel.

‘It’s all male’ I whispered to my neighbour.

‘It’s Sicily’ he shrugged. ‘But in reality the women control everything.’

Leoluca Orlando, the mayor of Palermo, who has transformed the city, made a speech exhorting people to visit. He said: 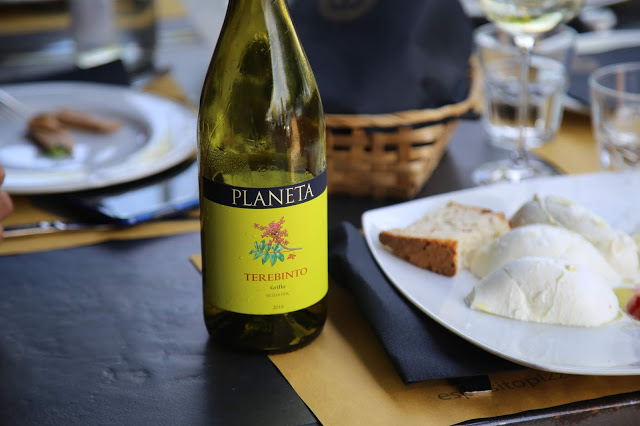 Jealous? Intrigued? Want to book a flight right now? I don’t blame you. 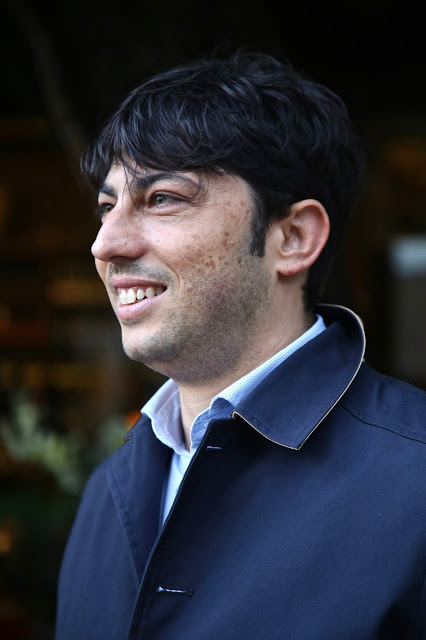 Previous Post: « Can your tomato glut in 20 easy steps
Next Post: The Allotment, winner of Best Vegetarian restaurant 2018 »