Here are a couple of recipes that I learnt while travelling in Madhya Pradesh plus some general thoughts on Indian food.

Everything is Indian in India. That’s part of what is so great about travelling here. Unlike most of the world where high streets are identical, India is just so bloody Indian. Especially the food.

Last night I had spaghetti for a change, somehow it had become Indian, with sliced green chillis and un-Italian spices. A cup of tea will be masala chai. A cup of coffee is thick with boiled milk and Nescafe. Breakfast is of course Indian. 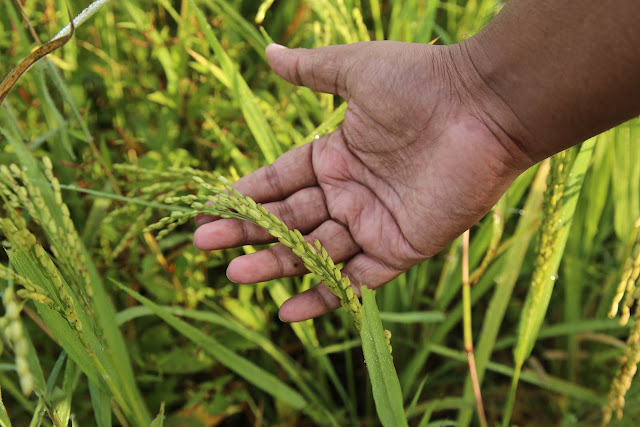 Virtually every meal follows the same routine and structure:

1) Half moons of crispy poppadum are served with three small dishes: salt, pepper and pickle.

2) Sometimes another dish of goat curd is added. Sometimes one is given a soup; lemon and coriander, mulligatawny or tomato soup. Tomato soup couldn’t be more different from thick Western Heinz style that we are accustomed to, it’s been clarified, and is a light transparent red.

3) Then come the curries: it is important to note the difference between wet and dry curries. The dry curries have less gravy and are served directly onto the main plate, but the wet curries, dhal for instance, are poured into little bowls.

4) The paneer cheese is wonderfully fresh, served in a variety of ways from the Chinese influenced ‘chilli paneer’, or coated with creamy cashew sauce. I must work out the recipe.

5) Spinach is creamed. When I make saag aloo I never cream the spinach. I’m very alert to texture, and I can’t abide slimyness. This is why I don’t like okra/bhindi, which is popular here.

6) Sauteed vegetables, not in a curry sauce, are another option; simple enough you might think but somehow this plain dish becomes Indian – they are sautéed in ghee and slick with pepper.

7) Breads are so good. Slim and flexible flatbreads, fried puffed breads, stuffed parathas, are made with the skill of regular practice and habit.

8) Rice often seems to be an afterthought, frequently served cold and lacking salt. Which is odd as Madhyar Pradesh is a rice producing state. In fact I’ve seen rice paddies and actual rice plants close-up for the first time ever. I remember a geography teacher explaining to me that Asians are intelligent because they are rice producing countries and it takes intelligence to grow rice and turn it into food. Certainly harder than potatoes.

8) For dessert I am mostly given some kind of rice pudding, a kheer, although it can have vermicelli instead, with sweet spiced whole milk, flavoured with cashews, pistachios and saffron. Kheer is also a popular breakfast item, along with milkshakes, buttermilk, sweet lassi. I have also been served gulab jamin, fudgy white balls  or chocolate kulfi, an unchurned ice cream.

9) Meals are breakfast (poha, or utthapam or masala omelette), lunch (curries), high tea (deep fried pakora fritters, or tea and biscuits)  and dinner (curries). After, say, five days of eating non-stop Asian food, I find I need a little break, a pasta, pizza, toast or something.

10) Service is attentive, almost ridiculously so. A man will stand next to your table watching you eat. If you nearly finish one pile of vegetables, you will be served another. To be honest I’d prefer to serve myself. But I suppose this is a relic of the memsahib British colonial style service. When I’m eating or cooking I go into a zen-like state which I don’t like to be interrupted. It was a family joke as a child that I used to say ‘Don’t talk to me, I’m concentrating on my food’. 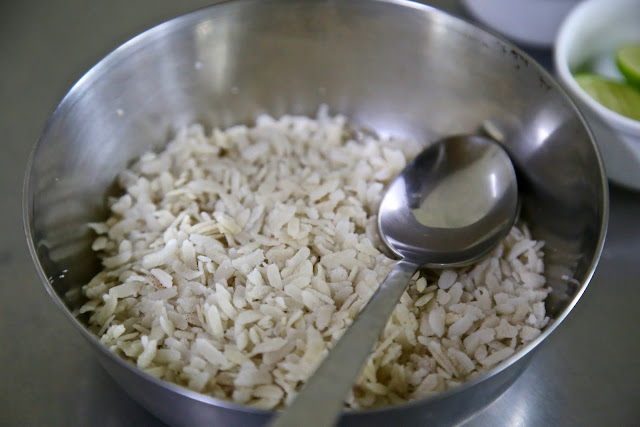 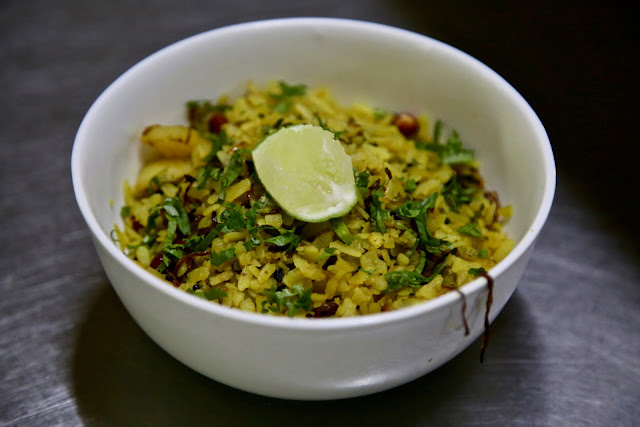 This flattened rice is a local speciality in both Madhya Pradesh and Maharashtra states. It's generally eaten for breakfast. I asked the chef at the Riverwood Lodge in Pench to show me how to prepare this dish. 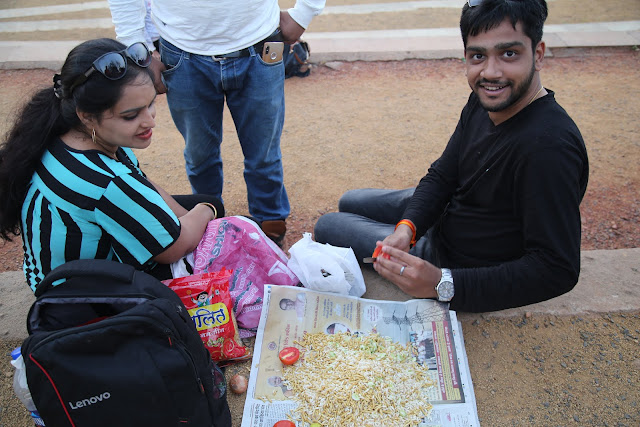 This is a great snack to accompany a glass of beer. I do find it so creative how Indian use rice crispies or puffed rice as a savoury dish. People said it came from Calcutta, but locally it appears to be known as 'Ayush'. At a sunset view spot in Pachmahri, I passed an Indian family who had laid out a clean thick newspaper and were making Jhaalmuri for a picnic snack. 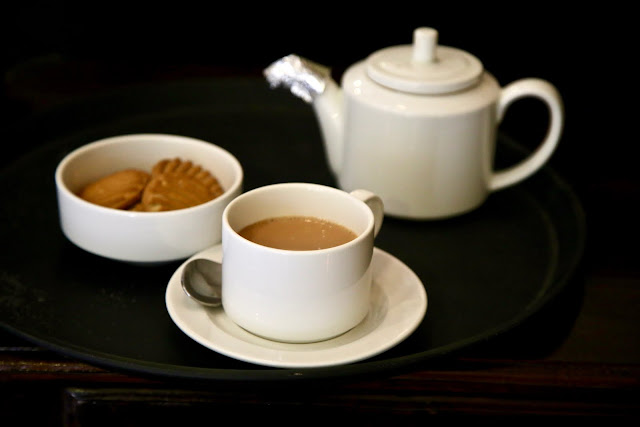 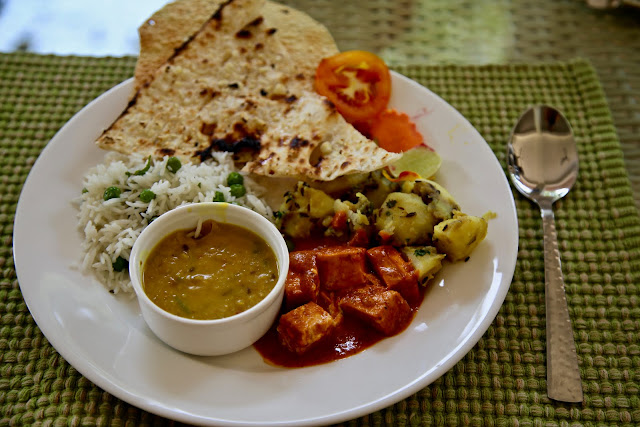 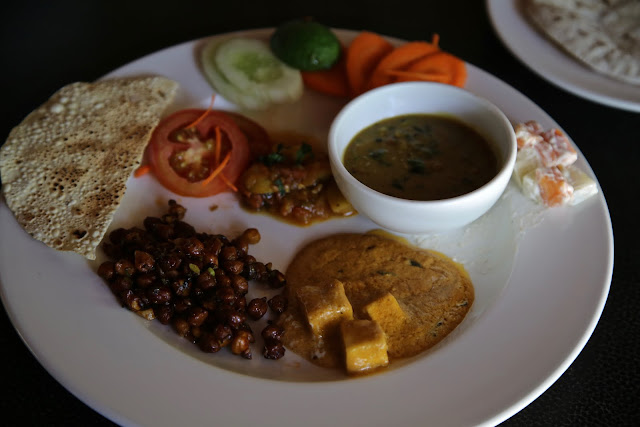 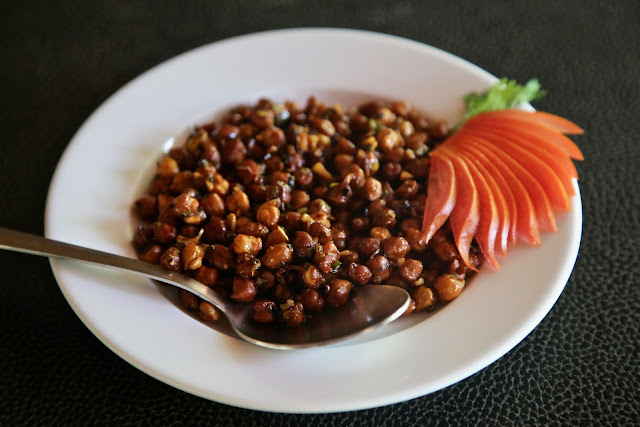 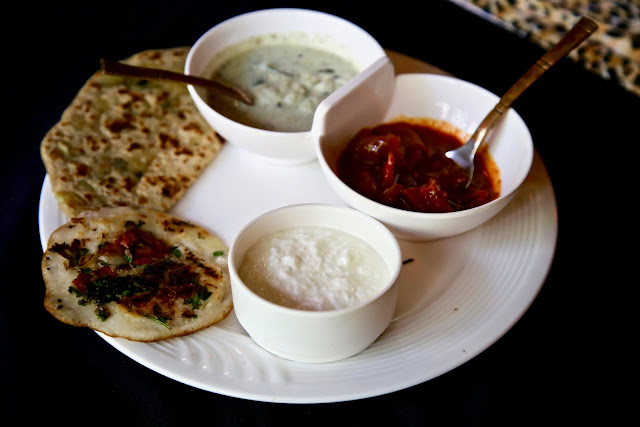 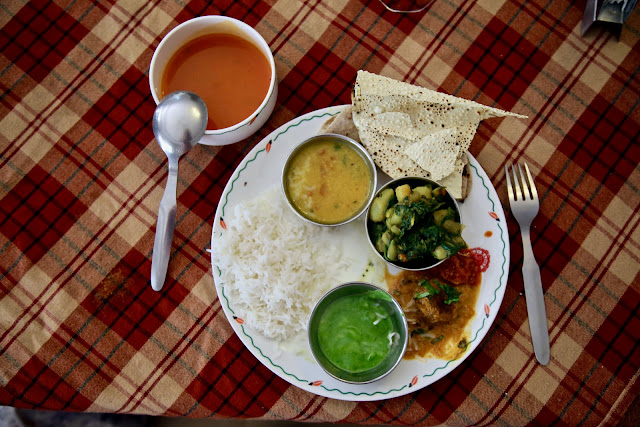 Previous Post: « Aberdeen and the Shire
Next Post: My visit to the spaghetti factory in Italy’s most famous pasta town, Gragnano »