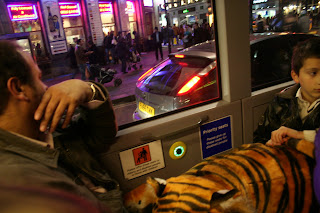 Saw Beowulf in Leicester Square. Very good, the special effects were impressive and we got to keep the 3D glasses. Ray Winstone did the voice for Beowulf but did not look like him. A hunky great viking rather than a podgy East Ender.

On the way home, the bus was full of returning shoppers from the sales. There was a huge tiger on the bus, taking up several seats. I wanted to ask the little boy who was its owner if he had paid  for the tigers seats.
When we got home I made cheese fondue. Then we watched Ballet Shoes, one of my favourite books. So disappointed. They put romance in…Garnie gets off with a lodger! Posy clearly couldn’t dance and all the children were far too old to play their parts. The story kept jumping. Bloody awful production.
On the news we saw that another tiger had escaped and had killed somebody in California.