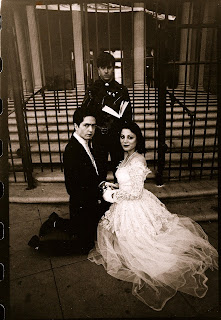 I always hate this. New years eve. We dressed up for the Victorian-cyber-goth party at Cable St. studios, Limehouse. Me and teenager both squashed into corsets and heels. We were supposed to play samba with our band in the courtyard. Someone in the band took my drum and left me with a stupid little surdo which made no sound. The entire point and pleasure of playing surdo is to play a big fuck-off drum that vibrates. I was in a no win position that if I refused I looked bad but if I said yes I felt bad. The band sounded really ropey as we haven’t played together for a long time. The place was too crowded and I doubted that my teenager would get into the main part of the building so I left, dragging her behind me. Of course I had to take her though as babysitting is hard to come by on New years eve. Drove home in a fury, just in time for midnight and the Jools Holland show which seems designed to make everyone else in the country feel bad about not being invited. Even saw Madness on there. Yuk. Bad memories which I may sometime post about. Does anybody else think that Kylie would be a brilliant new wife for Paul McCartney? She is a pointy blonde just like Linda and Heather, has had breast cancer like Linda so they have that link, is a musician of sorts, needs a man and a baby before its too late…has her own money and fame so not needing him for that…

2008. Really not looking forward to it.
Watching programme on extra nipples and just saw my friend Simon on telly in Soho talking to the camera. I know a couple of people that have extra nipples… one woman that has 3 breasts another woman that has 2 vagina’s and 2 wombs!
UPDATE: apparently the Jools Holland New Years Eve show isn’t even live! They film it at least a couple of weeks beforehand. So in fact all those partying rockstars and comedians are probably sitting on the sofa at home, gurgling fake champagne just like the rest of us except that they are probably drinking real champagne and watching themselves on telly .