Attended the closed circle meeting, again an interesting experience which always leaves me feeling exhausted. One medium, a cheeky chappie cockney named Sells, has been receiving communications from the other side since childhood. His persona is completely at odds with what one would imagine a psychic/medium to be. He jokes, drinks beer, then gazes with lively blue eyes into the distance ” Oh theres one sitting over there in the corner!” he’ll remark, without any of the usual intensity and other worldliness associated with these people. Imagine Tommy Steele communing with the spirits and you’ve got the idea. Sitting around the pub, most of whose live inhabitants look like they were chosen from central casting, are characters; the white bearded fisherman type with an eyepatch, the long faced modigliani woman staring ahead with straight grey centre parted hair, the ex army major with a handle bar moustache guiding his wife by the elbow to the dark stained bar for a ‘sherry’.
Sells, again, dancing eyes with a little smile playing around his lips, speaks again” there was a bomb here, people were killed, was there a tram in Highgate?”. He says he gets tugs at his sleeve, low down if its a child, a bear hug if it was a big man. He is clairvoyant not clairaudient, and sees rather than hears the ghosts. He tells us to distrust any trance medium, they are all frauds, he says.
I ask him about the McCanns case and he agrees with me that Madeleine “has passed” and thats she’s in Portugal. He doesn’t believe her body will ever be found. He says he doesn’t interfere unless asked by the police. He has worked on a couple of cases in the UK but stopped after being threatened by the “underworld”. In Battersea there is room 909, where the 100 mediums currently employed by the police, report. They used to be paid in cash but are still not acknowledged. His friend Lorraine found Holly and Jessica’s bodies, he said, but the police made out it was a couple of walkers. Lorraine ‘saw’ the location and described it perfectly to the police, the stream, the green bottles, a wooden gate. 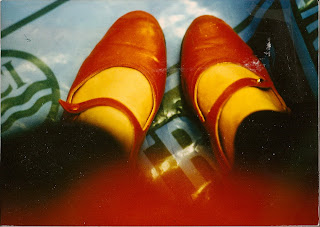 He talked also about Helen Duncan, the medium jailed for revealing that a ship had sunk during WWII, an affair known as the last witch trial. “This is the true story of a woman sent to prison accused of being a witch when she was a well-known and proven psychic. During WWII Helen’s accurate ‘death notices’ were verified countless times. When she materialized the full form of a sailor with the name H.M.S. BARHAM on his cap, a ship which the English government denied had been sunk; she was arrested and jailed as a spy and then a witch. Even after she was proven correct, she was held as a witch. ” A website is devoted to securing her pardon, even now.