This film contains a tour de force performance by Daniel Day Lewis, who acts as if a man possessed… My theory is that anyone who dribbles on screen is automatically given an Oscar, snotty noses count too!
Spent some time in The National Gallery, where I viewed some of my old faves, The Ambassadors by Holbein fils, The Arnolfini marriage, the Wilton diptych.
The Ambassadors is intriguing in part because of the anamorphism of a skull in the lower front section of the painting. The shelves upon which the French ambassador, Jean de Dinteville, and his friend Georges de Selve, the bishop of Lavaur are leaning are split into heaven and earth. The top shelf contains an astrolabe and instruments for calculating the stars, while upon the bottom shelf rest symbols of earthly pleasure; music, writing and a drawing instrument. 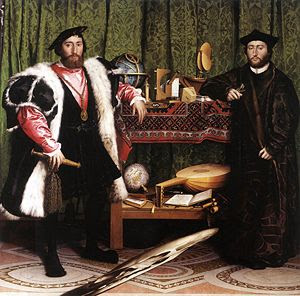 The green of the curtain behind them puts me in mind of another of my obsessions, Mary Magdalene, who is represented in art via her green cloak as opposed to the heavenly blue cloak of Mary the mother. Green was the colour of prostitution, in Tudor times, not red as it is nowadays. If you wore a green skirt or had ‘Greensleeves’ you were available for sex, the green of your skirt better able to hide the grass stains…
‘Greensleeves’ was supposedly composed by Henry VIII for Anne Boleyn, another one of my historical character obsessions, this time from childhood. Others include Napoleon (1992-3), the aforementioned Mary Magdalene (2005-7), Marie Antoinette (2007), Frida Kahlo (1994-5).
2005-6 I did a pilgrimage connected to Mary Magdalene, inspired by Laurence Gardner. After a visit to Glastonbury and Avebury for the solstice I moved onto St. Maximim-La Sainte Baume, Provence, where I just happened to turn up on her feast day, fortunately on the one day a year when her golden skull is on display in the cathedral. My parents had just bought a house about 45 minutes away from St. Maximim where I put my teenager into the local collège and stayed for the year. To occupy myself during that year in France I intended to do a Masters in History of Art concentrating on Magdalene imagery at Aix en Provence but the 5 hour round trip from where I was living defeated me.
I followed this up with trips to Rennes le chateau and the Rosslyn chapel, the same year. The Rosslyn chapel visit coincided with my participation in the anti-G8 camp in Stirling near Gleneagles. I took the day off from bringing down the government (lol), to do a bit of sight seeing, much to the disapproval of more dedicated activists.
Other pilgrimages: 2007 I finally made it to see Frida Kahlo’s house in Mexico city. I arrived at her house coincidentally on the day of the 100th anniversary of her death. How I’ve sobbed for that woman in the past. Going there though does put the person into perspective…some of her seemingly strange costumes are in fact direct copies of folklore costume still worn.
The Napolean obsession was exorcised by visits to Elba and Corsica as well as parts of Paris. St Helena was a bit too far.