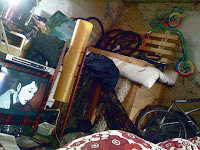 Woah another brilliant night at the Hackney Social Centre, loving that place…Naked John, Ms Puddleduck and I spent 3 hours talking about sex in Viet Hoa restaurant, Dalston over hot and sour soup then swept up to darkest Clapton in my little French farmers van. Subjects explored include bits we don’t like lovers to touch… Ms Puddleduck hates her feet being licked and threatens to kick any man attempting to worship her hobbit-like (according to her description) extremities in the face. Foot fetishists have my vote, but I squirm when my ears are touched. John doesn’t like penetrative sex…but then again, he’s basically gay. When he does go with girls, they are the skinny oriental types, boyish bar a fanny and fried egg tits.
Speaking of which I wore again my pink Topshop dress last seen in the drenched fish’n’chips incident. It looked fine in the dressing room, but when worn in a real time/space continuum, it’s obscene. The peek-a-boo slit subtly showing off cleavage developed into a straining in-ya-face Amsterdam red light district peep show. Keep that dress for saucier evenings, note to self.
Dvd was there in fine form. He’s a “Jew not Jewish”, he informs me. Baffled, I ask for clarification… “I’m not Jewish, I’m not gay-ish, I’m not vegan-ish, I’m not green-ish. I’m a Jewfuckyou!” Aaah. I see. His sister writes Harry Potter porn, a huge industry, I hear. He is so inventive verbally. He’s coined a new term for fag hags…fag whisperers. These are women who try to coax you out of your homosexuality.
The Hackney social centre used to be Chimes bar, the location at the origin of why Clapton High Road is known as “murder mile”. Lots of girls from the self-assessing (you are the gender you decide) ‘womyns space’. One beautiful girl with stubble and large hands, didn’t like to ask, probably trans.
Other terms for Hackney: Crackney, Smackney, Gackney, Lackney (poverty). It’s an island in the East of London, a tube-less enclave where some fear to tread. I feel more comfortable, as an inveterate ‘Outsider’, with the crack-heads of London Fields than I do with most other people.
In the morning it snowed in London. Snow in April. Huddled under blankets, John introduced me to the manga film ‘Paprika‘ which is pretty trippy and good preparation for my proposed trip to the anti-G8 in Japan this summer. I then drove across the river to pick up my teenager in Wimbledon. She has been staying with a Syrian-French family, the mum all Delacroix Eastern curves and a sweet face hewn out of marble. My teenager is loving being with a proper French mum and lots of sisters. As it’s still bordelique chez moi, I have no kitchen, no floor, and the rest of the flat is in boxes, my teenager can stay for a few more days. This is probably the most freedom I’ve had in years, and I’m making the most of it. Nursing a sore throat, partly due to a Crowley spell invoked by another (ojo, I know what you are up to) I’m determined to burn the candle at both ends. You can sleep when you are dead.