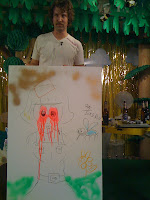 Tonight saw a single mum mate, Y, at the Hayward Gallery where there was a ‘happening’ by the artist Marc Horowitz. I didn’t get the point of the ‘happening’, it seemed scattered and reeked of end-of-pier desperation. Jodie Harsh participated. Another female-mocking male, in her tangled beehive and glittery rags, methinks. 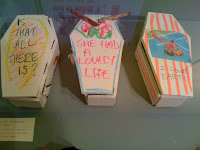 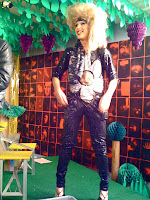 Y and I ended up getting into a big discussion about anger over the dear departed dad. Ha! Trouble is they aren’t even dead. Her daughter, a beauty at 16, is now getting curious about what dad is like. Y, like me, has never had child support or visits or anything. Twice a year my daughter’s father sends a couple of dvd’s suitable for an 8 year old and that is the sum total of his contribution.
Y has managed to repress the anger up till now she says (coulda fooled me, she was one of the few women to upfront hate men in this world of approval-seeking women). “I could never understand why you were so angry”, she said to me, “and now I do”. Personally I’m past all that, amazingly. I don’t even think about him. I suppose the last straw, and the ‘There is no god’ moment for me with him was when I had a miscarriage in 2005 and received a slimy self-congratulatory letter from him announcing the birth of his new child who was born the same month my child would have been born, had it lived. I almost fainted.
Most of us single parents start to wear out when the kid turns about 11, Y and I have worked out. A friend of mine, Sylvia, who had a child with a certain Irish rock star, sent her daughter to boarding school at that age, needing a break. She paid for the first year and then asked very rich dad (who’d never paid maintenance) if he could pay the fees after that. He defended himself in court, spending more on top barristers than he ever would have on school fees. Sylvia lost. The girl had to leave the school.
Years later, he decided, prompted by compassionate new wifey, to get in touch with said daughter when she was about 30. Daughter thrilled, nervous like with a new lover, on best behaviour, unnatural. He was a stranger. Sylvia traumatised, an open wound bleeding once more. Sylvia also had money problems, like you tend to when you have spent the most productive years of your life bringing up children on a shoe-string. To see this born-again dad lavishing money on a 30 year old, buying her affection and admiration, was painful. Of course, this honeymoon didn’t last long. He lost interest, they argued, Sylvia went back to being the rock-solid mum she’d always been.
Its all about control. They won’t give the child money because they don’t want the mothers life to be easier. Germaine Greer says the rise in single parenthood (99% are women) is male revenge for feminism. She says a woman on her own with a child is a woman in trouble. She also has some very interesting points to make about transsexuals.
(I tip my hat in solidarity to male single parents, of which I know a couple, who are suddenly projected, with all the attendant problems, into the unremunerated world of mothers).