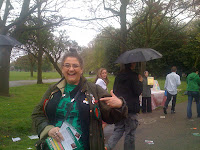 Today was the 30th anniversary of Rock Against Racism, a festival in Victoria Park, Hackney. The weather was cold and rainy so I couldn’t be bothered to make the effort to queue to get into the park to see Paul Simonon of The Clash play with Damon Albarns’ group, The Good, The Bad and The Queen.

But I did see Carole of Big Brother 8, the reality show, handing out leaflets, going back to her activist roots. People constantly went up to her and asked for their photo to be taken. She was friendly and gracious to each one and was prettier and tinier in real life. Basically if she had more money, she’d look better. As my mother quipped on seeing Liz Hurley on a magazine cover with the strap line: How to look fantastic after 40!…

Carole and I had a chat…

“has your life changed since Big Brother?”

“No”, she said, “not for me, I’m still skint, almost lost my house several times. It has for the others, the twins who are buying a house in Kensal Rise, very near to Ziggy.”

“Yes, I did, but he ripped me off, now I’ve got another one. But I did think I would get all kinds of work from Big Brother, say being an agony aunt or whatever. Last night I was invited to Kerry Katona’s birthday at a night club. But I didn’t want to go,  because I’ve got no money and nothing to wear”.

I said to her:  “I’m surprised no one has wanted to do a make-over on you, like 10 Years Younger”

“No, they haven’t yet”, she replied, so she’s obviously up for it

Clearly being on a reality show isn’t quite the route to fame and fortune that it’s cracked up to be. Personally I’d rather be boiled in oil than undergo something like that…