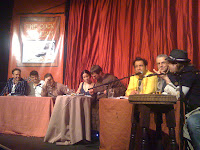 Friday night a comedy quiz night about conspiracy theories… sounds like a great idea on paper doesn’t it? Especially when your team captains are David Shayler (ex MI5 or merely “five” to those in the know) and Nick Pope, ex MoD now expert in UFO’s. The quiz master was Ben Norris, who, dressed as a Jedi, carried the evening with his witticisms and quick repartee. There were several rounds: UFO’s, Diana, aliens, the ‘alleged’ moon landings,O.J., and, hardest of all, the music round…theme tunes from various sci-fi movies, all of which sounded the same and nobody could guess the answers.

I have to admit, the mix of comedy and conspiracy was a slightly uncomfortable one, in that many of the audience seemed to have come in all seriousness to hear the conspiracy side of things. Sometimes David Shayler, head to toe in messiah white with bare feet, would make statements about say, 9/11 and the audience would clap loudly.
I got an opportunity to talk to both Nick Pope and David Shayler, both of whom were very approachable. Nick Pope started out as a skeptic working for the Ministry of Defence but grew to take UFO sightings seriously. He told me “even the MoD admit that some sightings are inexplicable”. He said that on the Vatican website, the Catholic church have now taken a position on aliens, acknowledging that a visitation is imminent, but that aliens too were created by the Catholic god.
Recently Nick Pope was in Nevada for a UFO conference and he got an email asking to go for a drink signed Robbie Williams, the pop star. Nick wasn’t sure whether to take it seriously but when walking along the street, Robbie Williams came running out of a bar saying “Nick! I want to talk to you”. Robbie had also approached Jon Ronson to make a documentary of this conference.
After the quiz I met David Shayler who takes himself very seriously. He stated baldly:

“I am the messiah. Last year I meditated and stopped those car bombs in London from going off. It is said in the bible that the last messiah will be called shyler or shayler.”

I noticed his pendant made of turquoise. I mentioned David Icke’s affinity with turquoise. Shayler retorted:

He didn’t agree with Icke that the Royal family are shape-shifters or lizards but was grateful for the market opportunities (for messiahs?) that Icke had opened up. He was scathing about his research however:

“Icke gets it all off the Internet. He doesn’t even do his own research.”

(Bit of inter-messiah competition there, I reckon.) Anyway I got his birth details and it will be interesting to see what his chart reveals.

Some examples of the questions:
Who of the following people have never seen a UFO?
a)Robbie Williams
b)Ronald Reagan
c)Dick Cheney
d)Ronald Reagan.
Answer c).
Which is the UK’s most famous UFO sighting?
Answer: Rendlesham forest (Nick Pope spoke up at this point and said “until 3 weeks ago it was up on the MoD website that radiation readings around the area at the time were significantly higher than background”).
What did Margaret Thatcher say about this sighting to a journalist at a no 10 cocktail party?
Answer: “You can’t tell the people”.
What brand of drink was Henri Paul seen drinking prior to his fatal car crash with Diana, Princess of Wales?
Answer: Ricard.