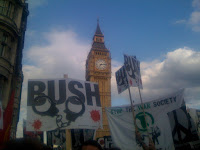 Yesterday: myself and my band attended the Anti-Bush protest in Parliament square to give him a proper send off from London. Had to listen to boring speeches, particularly by that nutty egotist Brian Haw (yes I admire him but he’s such a bore). Frustrated, I was about to leave. Talk is cheap. Action is more my style. Then we led the protesters, pied piper stylee, to the barricades and blood rushing to my ears, tried to push through to Downing Street.
Drumming is war. We can control the tempo of the crowd with it. We can lift them up, push them forward, make them excited, calm them down. I only stopped to reapply my lipstick. Come the revolution I will be in lipstick and heels! Glamour is such an important element in protest. Although author Alice Bailey disagrees, in that it can “bewilder, confuse and contribute to the problems of the world.” When I attended the organisatorial meetings for the anti-g8 camp in Stirling, Scotland, we discussed how to get there from London. “I think we should hire a train” I spoke up ” because it’s more glamorous…” Titters from the crowd, gaping jaws from the crustier elements… John Jordan understood what I meant…he was one of the creators of Tactical Frivolity…the strategy behind the Pink Block, the fluffy, entertainment branch of the protest movement, comprising of clowns, costumes, music, glitter and feathers.
Good film by my mate Rikki Blue at this link: http://publish.indymedia.org.uk/media/2008/06//401259.mp4