As a child, my parents terrified me with stories of Aleister Crowley, “the wickedest man in the world”. As an adult, I challenge myself to confront that of which I am terrified, so I have joined OTO (Ordo Templi Orientis). The first meeting or moot, in the parlance, was at Devereux court in London at the meeting of the Strand and the Fleet. Steve Wilson of OTO Albion gave the talk entitled ‘Ufo’s and the Occult – the forgotten link’ in the top room of the Devereux pub. These meetings take place every other week. People were dotted around the room, seemingly unconnected with each other. One man with a beard was eating apple pie and drinking beer, while scattered lone women knitted (spinsters?) strange web-like garments, amidst leather clad chunky boys with long hair and eye patches.
Forgive me if my notes are patchy, I was rather stoned, having mistakenly been given an after-work toke at the end of my chefs stint at Pogos cafe.
Steve begins: “UFOs and the occult are very separate now.
The history of interest in occult and UFO’s briefly:
Salem, Massachussets: Increase Mather was involved, and he was the father of Cotton Mather. All the witches that had been hung were posthumously pardoned.
Air was the property of Satan, he was prince of the air. Joseph Addison began a fight in this very pub(1) which led to prosecution and the witchcraft act. In 1951 it was repealed.
Rosicrucianism began early in the 16th century. There was a spread of freemasonry during the Enlightenment. 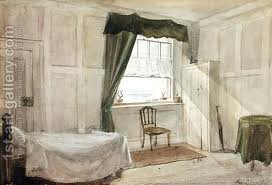 Angels are a form of alien life form and William Blake was the most famous follower of angels.
In the 18th century freemasonry has strict observance and was populated by Jacobites. In 1745 James II was defeated by William of Orange, supported by Scottish freemasons.
In the 19th century there were ‘instructions’ from more interesting characters…dead people…via Theosophy. 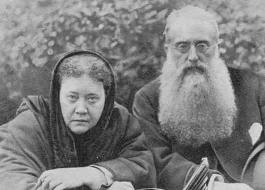 Hegel was involved with Rosicrucians. He had mystical visions while still a student. He said that human spirits go through different stages. Hegel was the philosophy behind Stalin and Hitler.
Madame Blavatsky was into racism but this time the race was Lemurian. She said that a new race was being born in California. At this point, still no one was looking into the skies.
Crowley with his Book of the Law wanted the overthrow of Christian thinking.
There were hidden masters in Tibet (Alexander David Neal writes about the astral travelling Tibetan lamas).
However in the 20th century, people actually started to visit Tibet in greater numbers and examine those claims.
In the 1920’s, the first World War, Guy Ballard received messages from other planets and channelled St Germain.
HP Lovecraft started to write a new form of horror. He loved New England. He relocated ‘Air’ in which demons moved, into outer space.
Arthur C Clarke says any creature distinguishable from a human being is a demon.
Then there was Orson Welles War of the Worlds, a spoof in which people in the States genuinely thought that they were being invaded from outer space.
Roswell incident…people ignored it until it had a revival of interest in the 1980’s.
George Adamski in the 1950’s claimed contact with a Venusian called Orthon. There were the 4 Georges at this time. Another, George King, a London taxi driver, who formed the Aetherius society, said that Jesus was a Venusian.
In the Aetherius society journal ‘Cosmic voice’ there was correspondence from so-called scientists agreeing with the evidence, however their names suggest another motivation altogether: Dr Eggnspoonrace, Artie Ficial.
Patrick Moore, the astronomer, treated Ufologists with respect, gently questioning them on TV.
Claude Vorilhon/Raël- who created the Raelian movement was another example of a UFO believing cult.
Louis Farrakhan was taken “up” by a black liberation spaceship.
1979 Steven Spielberg took the whole movement backwards with his film Close encounters of the Third Kind.
Then aliens started abducting us, inserting things into our bottoms.
There were also suicide cults such as Heavens Gate and the Order of the Solar Temple.
Wilhem Reich developed his theory of primordial cosmic energy, regularly saw UFO’s in the United States and even claimed to do battle with them. Trevor James, a scientist and engineer who invented rain control technology, also claimed knowledge of 4th dimensional beings, “critters” and investigated UFO’s at Giant Rock.
Andy Collins suggests that aliens are living beings and ‘self-transforming machine elves’.
In the 60’s people took hallucinogenics which derived from Ergot. This fungus which you find on rye causes mutations in the DNA. LSD causes migraines and schizophrenia. There was a famous Ergot poisoning incident in France, a bakery had infected rye loaves and the whole village started tripping. Some villagers ended up in asylums.
It was misreported that Jung believed in flying saucers.
In the 1970’s there was the successful channelled book by Jane Roberts “Seth speaks”.
Unarius group in California.Unarius is an acronym which stands for UNiversal ARticulate Interdimensional Understanding of Science. Their founder, Ernest Norman, believed for instance that the Chinese originated from Mars, that some Chinese have returned to Mars and live underground.”


There was a break for a raffle. Nobody wanted the book ‘The Crystal skull‘ preferring the alcoholic prizes.
The women continued to knit and give piercing looks to each other.
Afterwards there were questions from the audience. One man talked of needing participants for the ‘Beyond belief’ Radio 4 programme.
Someone else mentioned Klaatu, an alien believing rock band.
The Carpenters turned the event, created in the 50’s “World contact day” into a hit…”Calling occupants of interplanetary craft” was written by Klaatu (more info here).

(Of course in popular music there is also “Rocket Man” by Elton John and “Space Oddity” by David Bowie coming just after the Moon ‘landing’. David Bowie built a whole career in fact on his alien type qualities…Ziggy Stardust, the weird different coloured eyes, The Man who fell to Earth).
“The Millerites were the origin of the 7th day Adventists and eventually the Jehovah’s Witnesses, following a split in the 30’s.”
In Britain there are around 40-50 active Raelians. One audience member participated in a talk on the Cosmic Orgasm which the Raelians believe enables you to get in touch with the Elohim. However, when questioned on how you know if you’ve just had a Cosmic Orgasm as opposed to an terrestrial one (Is that where the expression “the earth moved” came from?) he then admitted he had never had either kind of orgasm.
Steve Wilson sees belief in UFO’s as millenarianism, he also thinks ‘free love’ is more popular at times of great stress in society.
“Both occultists and ufologists are both seen as outsiders/loonies by society but for different reasons.
Occultists are into gods and goddesses, spirits, religion, meditation, etc
Ufologists are into implants, UFOs, abductions, but they believe they are scientists.
None of the Masters who have been channeled have really helped us. Have they cured cancer? The masters tend to utter bland phrases about world peace and everybody love each other…”


I mention the aptly named Dennis Gray who has seen UFOs at Highbury corner and down Islington High St in the last few months…He has bravely gone to the press with these sightings but each article mentions the fact that he is a second hand car dealer, apparently an instant disqualification from any kind of credibility.

(1)The Grecian Coffee House was in Devereux Court, Strand, and named from a Greek, Constantine, who kept it. Close to the Temple, it was a place of resort for the lawyers. Constantine’s Greek had tempted also Greek scholars to the house, learned Professors and Fellows of the Royal Society. Here, it is said, two friends quarrelled so bitterly over a Greek accent that they went out into Devereux Court and fought a duel, in which one was killed on the spot.