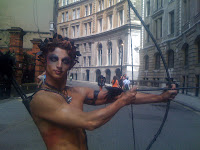 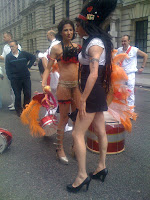 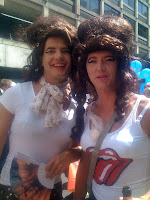 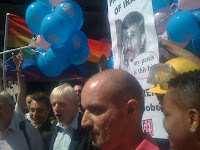 At the start of the march, the actor Sir Ian Mckellen, better known as Gandalf, stood beaming at us as we thumped past him. Tourists and gay people thronged the route along Oxford Street, down to Piccadilly Circus, terminating in Trafalgar Square. Funniest moment for me were the three friendly rubber clad gimps in full face masks, no doubt melting in the heat, rattling their chains in time to the music. Couldn’t get a picture and keep the beat though…
There are floats from gay ambulance drivers, gay National Health Service workers, gay police, gay firemen…
If there was any doubt that Amy Winehouse has made it as a popular culture icon, it was confirmed by the fact that I saw at least 8 men dressed as Amy’s. The tall black beehive studded with cocktail umbrella’s, skinny legs atop teetering heels, was shorthand for a certain shambolic nihilist glamour admired by the gay fraternity. (Close up as I was at Glastonbury, it was clear that her beehive was entirely fake. I guess they are now selling Amy hairpieces. Her look has become a joke shop outfit. In addition, my daughter’s drum teacher who is friends with Amy’s band, gossiped that she is a total mess, constantly forgetting lyrics).
There was, of course, the alternative event in Vauxhall, Gay Shame, the annual festival of masculine misery, which stated the following in its flyer:

On Gay P**de night 2008 it’s time to make men pay. Collect your wad of nine bob notes on the door and spend them in the market place as Duckie turns consumers into real men.

Take part in over 30 stalls that test your masculinity.

which sounded like a laugh, but at the end of the march, my hands full of blisters, I did not have the energy to attend…

We did busk a while in the back streets of Soho (London’s gay quarter) until a fire started in the building above us and we were interrupted by the arrival of the fire brigade, whose uniformed bod’s, skillful hose-work and masculine bravery, delighted the appreciative onlookers…
(1) Each samba band has their own colours: Rhythms of Resistance London, (other bands in the anarchist RoR franchise, which is spreading all over the world, from Torino and Amsterdam to Mexico City, wear different colours) wears pink and silver; London School of Samba: green and white; ect ect. Each samba school has different functions: RoR is political and does actions and demo’s; Barking Bateria is the party band; London School of Samba (LSS) is the official British samba band, and does the Notting Hill Carnival; Paraiso is in it for the money; Rhythms of the City are technically superb but rather boring. Of course we all cross over and sometimes get together for huge marches. You cannot imagine the thrill of drumming with 60 other drummers! You also get your gig tarts, who just take their pick of juicy gigs with each band. The Samba scene is very incestuous: several marriages and samba babies have resulted…Barking Bateria, unfortunately before I joined, used to have, it is said, massive orgies in which everyone had it off with everyone else. There was one point at which the entire band had to get treatment for VD en masse.