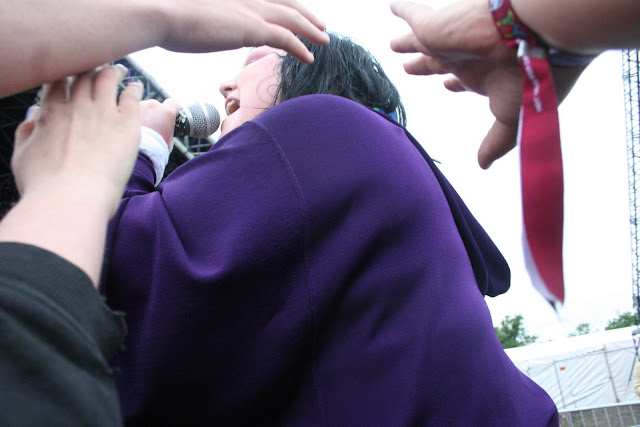 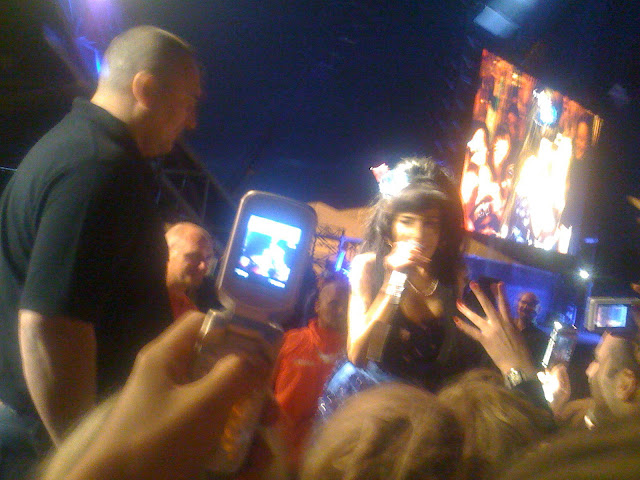 Amy gets among the audience (gets her tit groped and punches a fan). 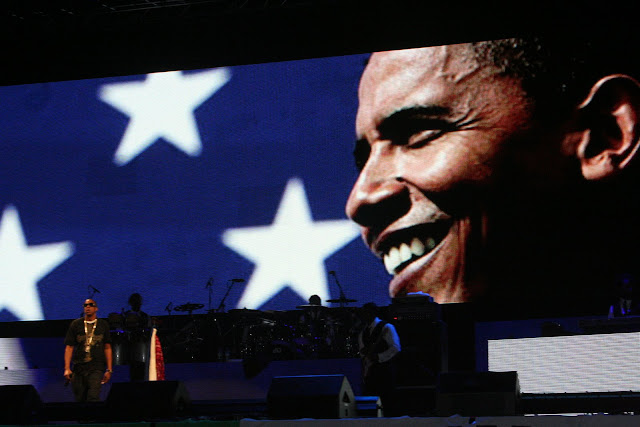 Jay-Z in front of Barack Obama.
Vampire Weekend. Wrong name for the band. They wear stupid brightly coloured sunglasses, as do many of their audience, and play jangly guitar pop.
Wandered to Pyramid stage where KT Tunstall was being competent but boring. Lulu with a guitar. She did share a random fact about redheads….that they need 20% more anaesthetic than other people.
The Feeling split the audience into 2 halves to sing the chorus of “Never be lonely” but then half the audience started shouting “Who are ya?” and pointing.
Surrounded by teenagers with braces, spots and bad breath.
Emotional moment when the gaylord singer in his singlet and waistcoat said he’d been coming to Glasto with his dad for years and his dream to play there had now come true. (Turns out he is gay in fact. Yawn. I’ll be more stunned when a pop star isn’t gay.)
Pity they’ve only got one song and a couple of covers.

The audience sang along with “Video killed the radio star” totally unaware that it was a Trevor Horn song. They are a boy band, nothing more.

Beth Ditto and The Gossip. She is remarkably pretty in real life. Dynamic, sexy with a sweet voice reminiscent of Dolly Parton. But again terrible songs. She joked about her “camels foot” showing. Cool tattooed girl drummer. Beth came into the audience, yes, we touched her blubber! The stage at the Pyramid is now so far away from the audience, it’s ridiculous.
Staggered to the Dance Tent to see MGMT but overcome with fatigue and claustrophobia.
The mud was sticky and walking was tiring. Sat down at a Workers Beer tent bench and got talking to a young man who went last year. He said that he spent a whole day sitting around watching people fall into a mud hole. It turns out some of this is on Youtube.
Next to the Acoustic stage where Sinead O’ Connor was playing. She’s too big a star for that stage, you couldn’t even get into the tent.
General observations: prices have gone up enormously. The couple camped next to us paid £7 for two 99 ice creams. A slice of pizza was £3.50p (a quid in Camden).
It’s become just another rock festival. It’s all Babylon now.
Too straight…too many students wearing Gap.
Just as heading home…came across the brilliant Dreadzone…bouncy techno reggae…suddenly a Glasto moment. And I don’t even like reggae. (Why aren’t this group playing the main stage rather than the one hit indie wonders? The lead is a great showman, he commands the stage, works the audience. A couple of years ago, friends of mine staged an event at the Scala cinema. It was a flop but they had booked Dreadzone. The lead singer came hours beforehand and was a perfectionist about the sound, the set up everything. They played to thirty people. But again were fantastic. Basically it doesn’t matter if they play to 10,000 people or one person, the performance is always top notch.)
In between each act, do-gooding videos were shown on the huge screens. Oh how I grew to hate the “Breathe’ infotainment ad for Greenpeace or Wateraid or whatever it was. Then Bono up there, pontificating. Grrr. Kill that man! Sorry Michael Eavis, but when you are either wet or freezing or dying for a pee, you want entertainment not lecturing. Anyway it’s not even working because most of the people at Glasto this year are chavs and couldn’t give a toss about the environment. Your eco tent pegs were chucked on the grass…entire ghost tent camps were left empty at the end, rubbish not even put in a bag. People literally just picked up their clothes and money and left, leaving tents, sleeping bags, mattresses, wellies, gazebos, chairs, cooking gear behind them. “Love the farm, leave no trace” was this years motto. What a joke!
I managed to see one of my favourite rock stars, Jack White, by mistake, as I didn’t know he was also The Raconteurs as well as the White Stripes. His dark brown eyes stared out of a pale white face, close-up you could see the layers of ghoulish make-up. Jack White only believes in 3 colours: Red, White and Black. And he’s right! (I might add a little Ickean turquoise and some hot pink myself). However he wore green. He’s a bit of a muso, our Jack, and spent much of the performance jamming with the drummer with his back to the audience. Still he is one of the few men with brown eyes that I completely lust over.
The huge screens next to the stage regularly showed 3 blonde girls going crazy to the music. I ended up standing behind, then after much elbowing, next to them. Close-up they had pimply faces but looked great on screen. Talking to them, it become evident that they knew nothing about music. They had no idea who most of the bands were that they were going mad over. Complete attention seekers… 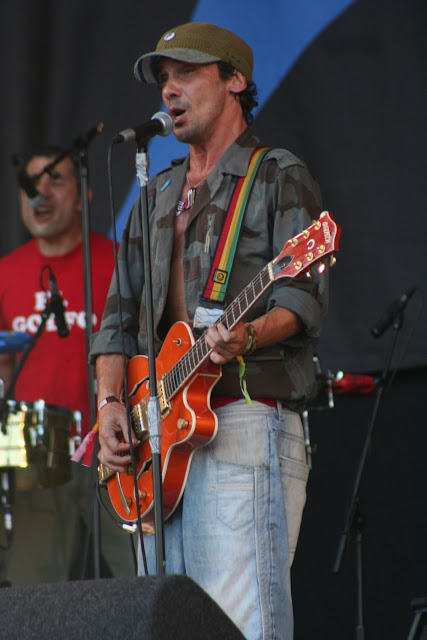 Manu Chao
Next Manu Chao, whose music I love. When I travelled in Guatemala last summer, the music I heard on the long bus journeys sounded so similar to that of Manu Chao. Then I heard he had a house there, so it all made sense. Live, however, Manu Chao is a disappointment. He constantly reverts to his Euro punk past (Mano Negra) and speeds up at the end of every song. It seems that he hasn’t the confidence to let the music do the work and resorts to crowd pleasing antics…
Amy Winehouse was surprisingly good. Her voice has gone. But she was charming and funny. I saw her last year at the Jazz stage and she was lack-lustre, so it seems that she has learnt to perform live in the meantime. Or maybe she was just less fucked on drugs and drink this time. She talked about her husband getting out of jail that day.

“I’ve never loved a white man before” she said.

The headliner on Saturday night was of course, Jay-Z. I was prepared to give him a chance. When he came on, he sang ‘Wonderwall’ by Oasis. Now that was cool, one in the eye for the critics, I thought. The visuals behind him were some of the best I’ve ever seen. But from then on, it was all downhill. It was like Hillsborough at the front, our ribs hurt from the crush. The noise was deafening, they must have broken some laws there. But all Jay-Z could do was shout. He wore shades throughout. He can’t sing. He can’t dance. He has no charisma. He has only machismo. Why, out of all the Hip hop artists, did they choose him?
Without the screen behind him and the noise, he was dead in the water. At this point however I saw some of the only black people I saw at the festival, being hauled out of the crowd towards the front, fainting.

Why don’t black people go to festivals? Is it because festivals are a middle class thing…whereas working class and black culture likes to look good, clean and rich and not at all crusty?

The reviews were kind to Jay-Z, no doubt some sort of political correctness but everyone I spoke to agreed, he was rubbish. 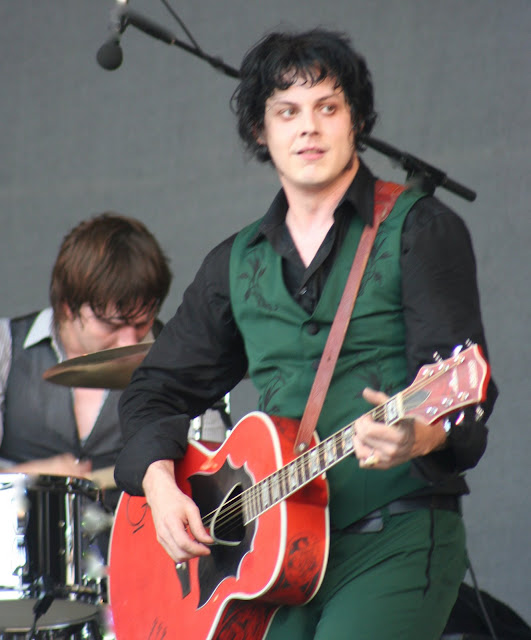