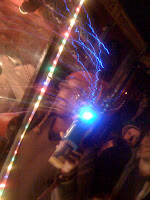 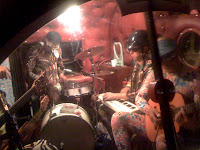 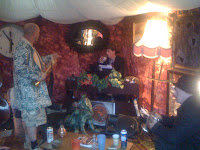 The living room in Shangri-la. 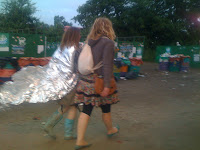 Goldfrapp, and girls in their nighties… 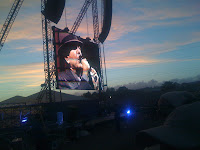 Leonard dominates the Glastonbury sunset.
How it used to be…you could wander the night around the festival, coming across little parties, joining camp fires, impromptu gigs, secret clubs…
Now the after-party is restricted to the former Lost Vagueness quarter, now known as Shangri-la and Trash City. (Roy Gurvitz,(1) the organiser of Lost Vagueness thew his toys out of the pram last year, rowed with Michael Eavis and was promptly shown that nothing is bigger than the festival!) Last year I performed as a vicar in the Chapel of Love in Lost Vagueness,”marrying” people. (I’m not really a performer so I was terrified… but apparently looked like a pro. It’s amazing how malleable audiences are…they really want you to control them)
So, walking along the railway track, previously a magical dark hidden pathway to the best parties…now it’s lined by fluorescent clothed security guards(health and safety?), herding the gormless crowds, split into two one-way traffic lines. You are allowed to enter (the land of, for this is, after all, hippie Disney land) Shangri-la at only one entrance and exit by another. The entire festival tries to squeeze into this one tiny section, the sheeple looking for after-hours action.
We visit a couple of ‘clubs’,  having to queue to get in! Outrageous! This is not London.
One creative bit of amusement is the juke box band…a four piece squeezed into psychedelic lycra body suits…you put in a pound, press a button and they play the song of your choice.
Also a campfire surrounded by squashy comfortable armchairs…
A living room recreated, with someone tinkling on a piano, sofa’s, cocktail bar, coffee tables…
Four giggling adults attempt a group hula hoop attempt…Twilight frolics…tried some MDMA (or Mdizzle as the kids call it), which made me tired…basically I’m shit at drugs, coke makes me fall asleep…
Sunday:
Saw last bit of John Mayer. Didn’t know he was shagging Jennifer Anniston or I would have taken more notice.
Waiting for Neil Diamond, the BBC cameras showed someone with a Bin Laden mask, the audience booed. Then the camera swung to an Elvis lookalike. Cheers. The camera swung back and forth between the two…boo…cheer…boo…cheer.
Was looking forward to Neil Diamond because he is a good songwriter with a great voice. But the voice didn’t really rumble. The show was Las Vegas rather than the pared down, Rick Rubin produced, recent album. He was in what I call the “Van Morrison slot” (some of my best Glasto moments have been listening to Van The Man). He sang “I’m a believer” which the audience sang with him. He should have passed at least one chorus over to the audience. He chose to leave the singalong until Sweet Caroline. It was bitterly cold.
Goldfrapp…I love Goldfrapp. There was a little May pole erected at the back. She had some great female musicians, a harpist and a keyboard player. Alison Goldfrapp wore a strange white shift with hundreds of pastel coloured ribbons sewn onto it, to echo the ribbon around the May pole. The instruments were festooned with foliage. At the back, there were wicker panels.
We were clearly referencing the films, The Wickerman or The Village by M. Night Shyamalan. I always think Goldfrapp’s music has a celluloid filmic quality to it. Two beautiful girls came out and danced, wearing tiny white cotton shifts and showing their white cotton knickers. Several shaggy pastel ‘monsters’ came out to dance. It was like something out of a school play. I liked it. It made me laugh. The girls then whipped off their tops and did some pole dancing. Interesting, linking pagan rituals and modern sex performance. A woman next to me tutted. Very sexist, she muttered. Not as sexist as Jay Z exhorting my teenage daughter, amongst others, to shout “ho!”.
It was a celebration of Englishness. Alison Goldfrapp has a lovely voice but you can hardly see her face, she always has her hair over it… it’s as if she doesn’t actually like the limelight.
She did her new slightly folksy stuff but also a couple of the hits such as Black Cherry. A highlight of the festival for me.
Better was to come…Leonard Cohen came on wearing a grey fedora and a grey suit. Now his voice did rumble. He dominated the stage effortlessly with his calm presence.
The whole set was fantastic, all the best known songs, great solo’s from the Spanish guitar player and the organ player. But the Glasto moment for me was during Hallellujah. Every chorus was sung by the audience. It was a religious spiritual feeling. The new church is at festivals. It sent shivers up my spine despite the cold. People waved their arms in time. I was more than happy to send my energy up to the fourth dimensional beings….

The Pyramid stage(2) was intentionally built on a ley line…in the book Glastonbury, An oral history of the music mud & magic, Bill Harkin talks about its construction…“One day I had a vivid dream of a stage and an audience and two beams of light forming a pyramid, and beyond that a hillside and a building. …I made some notes and sketches from the dream. The next morning I made a cardboard pyramid in my studio…I took the model with me.Andrew said he had the perfect spot for the stage, he’d dowsed it, so we walked down and found the spike they’d driven in, and looking back towards the farmhouse, I saw the landscape from my dream.”

(1) Now Roy had a thing for my sister. She was going to go home with him after a party. But he stank so much. He was a traveller before becoming the Lost Vagueness guy. So in big sis mode, I advised her against it. I wonder if I did the right thing as he is probably rather rich now.
(2) It just occurred to me that this final day of the festival, spent in front of the Pyramid stage, I was standing next to and chatting with another mother/teenage daughter. The mother, a journalist, is English, married to an Egyptian and they live next to the pyramids in Cairo. They flew over especially for the Glastonbury festival.