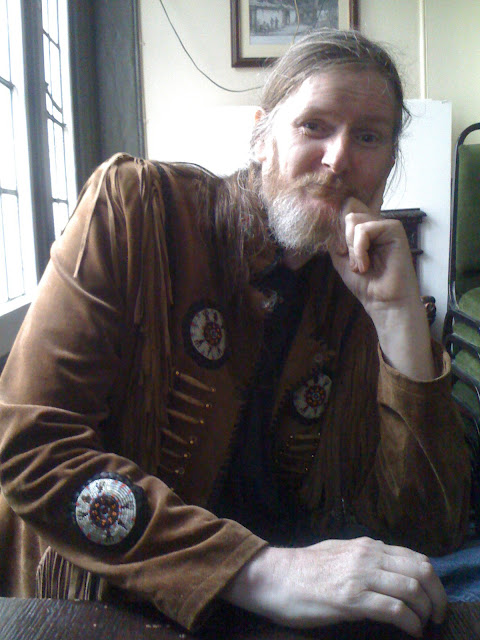 Arrived late, missing the chat by Sandy Robertson, a man in his 50’s with a long pony tail, wearing a suede-fringed native Indian style jacket, in which he discussed writing The Aleister Crowley Scrapbook. Sandy used to be a music journalist for Sounds at around the same time I was working for the New Musical Express. We had a bitch about Tony Stewart who was the deputy editor at NME then editor at Sounds. Everybody hated and feared Tony Stewart who used to stare balefully at aspiring freelancers with his black eyes, not just the pupils but the whites.
Sandy specialised in Industrial/Avant-garde music which brought us onto the subject of Throbbing Gristle and Genesis P. Orridge. I first met members of Throbbing Gristle when I was 16. I had run away from home to Muswell Hill and was staying with a friend. The upstairs tenants were TG members Chris and Cosey. They had just come back from the vernissage of their ground-breaking exhibition ‘Prostitution‘ at the I.C.A. where Cosey displayed her used sanitary towels. Chris wore platform boots and glittery make-up. They seemed so exciting and dangerous, a new world to a 16 year old. After that, I used to see Genesis around the clubs. Once I met him when Throbbing Gristle were playing one of the Architectural Associations’ amazing parties. Sadly for Genesis, his wife, Lady Jaye, has recently died, according to an obituary in The Guardian. Genesis has gone through extensive plastic surgery (breast implants etc) so that they would look similar…like mirror images of each other, a Platonian ideal. I always fancied him although he now looks like Danny LaRue.
We also discussed the occult writer Colin Wilson, who kindly wrote the introduction to Sandy’s ‘Scrapbook’ in return for a case of Bordeaux. Wilson was living on Hampstead Heath in a tent when he wrote his break-through best-seller The Outsider. But Wilson did not form part of the Oxbridge writers elite and felt that true success eluded him as a result. Sandy Robertson’s father used to make walking sticks for Wilson.
Aleister Crowley famously used a stretched dried rhino penis as a walking stick. Crowley influenced many writers and artists during his time, including James Bond author Ian Fleming, who tried to enlist Crowley in the war effort, and the novelist Dennis Wheatley. More info about the use of occult against the Nazis and the connection between Crowley and Winston Churchill here. But the more I hear about Crowley, the more I realise that he was a joker, a trickster, someone with a tremendous sense of humour rather than the most wicked man in the world.