On the drive up to Solfest, my daughter, for whom I bought the DVD Withnail and I this birthday, saw the name ‘Penrith’ leading off the motorway. “That’s the cottage,” she cried, “Uncle Monty’s cottage, we’ve got to go!”
As she spent the entire festival rereading Harry Potter in the van, I decided to treat her, on our return journey, to a pilgrimage to Penrith. We arrived late about 5. We parked next to the Wet Sleddon reservoir. There was another car full of young lads, Lake District stoners. Eyeing their Camberwell carrot, I thought they will know where it is.
“It’s only a 20 minute walk to the cottage” they said.
We set off. We didn’t change into wellies, thinking it’s not far.
It started to rain. As time went on, a black cloud descended from the hills. The footpath disappeared into a stream. Our feet were getting squelchy. We continued. We found mushrooms, ceps and chanterelles (the first time I have found them in Britain). 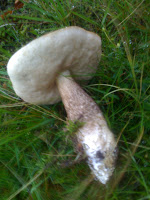 There were many sheep and some rams. My daughter was frightened of the rams.
We kept walking. After an hour, it was getting darker, even though it wasn’t due to get dark for another 3 and a half hours.
We were decidedly lost. We hadn’t even found the cottage. (1)
We saw some ‘Withnail’ related graffiti, dialogue from the film felt-tipped onto a post. We must be near, we thought. But the building we had headed towards, didn’t seem to be the right place. It was empty, dark and rather frightening.
“Mum, I’m scared” said my normally stroppy teenager. “I think its haunted”.
Worn out, we decided to attempt to find our way back, but this time via a proper path/road. But it seemed to be leading away from the reservoir, which we could still glimpse distantly.
Night was falling.
Rain was blowing in sideways. We were soaked.
We passed a farm. I’m terrified of dogs. Especially farm dogs. I try to make my daughter go in and ask directions. She refused.
Bulls block the road. We cower by the side for a while. Eventually they move off. We summon all our courage and continue. As we get nearer, we see that they are, in fact, cows.
My daughter wants to leave the path and cut across fields…we start and then I realise instinctively that this is a very bad idea. A little voice in my head says ‘never leave the path’.
We are such townies. I get a signal on my phone. I call my rambler friend in Liverpool. “Call the coastguard” she says. “When night falls in the Lake district, it is pitch black and you will freeze.” She adds “Plus they are gorgeous hunky men.”
It’s August, who would have imagined such weather? We’ve been out for 3 hours.
Feeling guilty, I reluctantly consider phoning 999. Then I hear a sound on the road. It’s a tractor. I run towards the road. “Help! Help!”
The farmer stops and opens the door, smiling.
After explanations and apologies he offers a lift to our van. He was the nightwatchman on the film.
“You met Richard E. Grant!” gasps my daughter.
We’ve never been in a tractor before, it’s such fun.
He gives us his phone number and says give us a call if you are ever up here again and I’ll show you the cottage.
We sit in the van, turn the heating up full and drive down the M6 towards Liverpool, towards my friend, cups of tea, sitting on the sofa, dry feet and a rare evening of TV….Skyplus’ 50 Celebrity Meltdowns.
Phew. 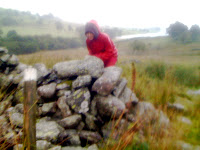 Hiding from the bulls
(1) It turned out that we had found the cottage, it was the slightly scary haunted place.
Update January 2009. The cottage is for sale, guide price £145,000 (link to story).