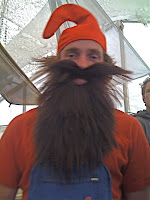 A smurf at Solfest 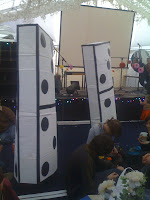 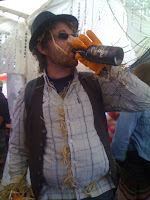 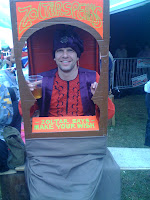 Zoltan read my fortune and said “You will work very hard for very little money”
A little sojourn up north…I went to Solfest, a tiny Cumbrian festival near the sea. Beautiful scenery, heather and salt breezes. The festival wasn’t up to much…
I was cooking, and I can report that salads don’t sell too well. I should have been making deep fried pizza or Mars bars in batter…
There was less money around than for Secret Garden Party but people were just as creative with their costumes…perhaps more so. Surveying two people dressed up as dominoes, I wondered with ‘Wurzel Gummidge’ if they knew each other before the festival “If they didn’t” he retorted “they are a match made in heaven”.
On my return I made a pilgrimage to Wet Sleddon near Penrith to see Uncle Monty’s cottage from Withnail and I, then to Birkenhead, next to Liverpool, for a visit to the “priory”…a much needed rest at the flat of my friend Liverbird. Finally a stop in Manchester where I was given a tour by Kurt Cobain.
Passing Old Trafford football ground, the home of Manchester United, he explained that it was traditional to sit in the terrace which faced your house. This stems from the days when fans were local and walked to the ground. Kurt is a Stretford ender. He is also a founder member of F.C. United, the red rebels, a breakaway club formed in disgust when Americans bought Man U, who regularly have attendances of 2-3,000 supporters and are rising rapidly up the league.
He, like Liverbird, hates Victoria Beckham.(1) If it wasn’t for her, he grumbled, Beckham would still be playing for Man U. Personally I like her. She’s self-deprecating, honest and funny. She also behaved with dignity during the whole Rebecca Loos episode.
Kurt showed me downtown Manchester,  where we had amazingly cheap and tasty curries (not in Curry Mile, which like Londons’ Brick Lane, is full of touristy rip-offs) and Moss side, scene of race riots in the 80’s. I also saw quite a few men with the Oasis (most famous sons of Manchester) haircut.
Manchester, according to Stuart Maconie who wrote ‘Pies and Prejudice’, is where Communism, Vegetarianism, and Feminism started. It’s also, of course, the home of the rave scene. I was shown where the Hacienda used to be…how can they close places like this? Same goes for the closed then rebuilt Cavern club in Liverpool, what municipal stupidity!
My residing memory of Manchester is of everybody singing “Always look on the bright side of life” from The Life of Brian when they lost the bid to hold the 2000 Olympics.
(1) I wonder if Liverbird dislikes her because she is one of the few non-scouse WAGS (read this wikipedia link, it’s very funny). She is in fact the WAG queen. I wanted to make a synchro-mystical pilgrimage to Cricket, the uber WAG boutique, in Liverpool but ran out of energy and time. I’m certain though that if one adds up the numerology of the letters in Coleen McCulloghs name, one can come up with some Babylonian New World Order conspiracy theory.

Look at the prices… 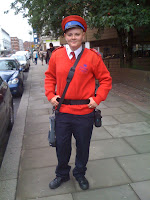 This Manchester traffic warden was cool, she was about to give me a ticket and then relented saying “no problem”. Can you imagine that in London?