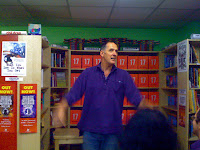 A tall Scottish man with a Billy Connolly delivery, Bill Drummond firstly announced his age, 55, and that he believed in the death of recorded music. Launching his latest book,  The 17, based on the number of performers he needed to recreate the engine noise of his battered landrover, Drummond refused to talk about some of the more colourful aspects of his past. These include managing Echo and the Bunnymen and the Teardrop Explodes (with the wonderful Julian Cope), starting the K Foundation and giving the Turner prize winner Rachel Whiteread, £40,000 (double the Turner prize winnings) for being the “worst artist of the year”, and most notably burning a million pounds in cash.

Bill introduced his new book with two anecdotes which explain how he has got to this point. The first was a reminiscence about buying his first single ‘Penny Lane’ by The Beatles. However it was the ‘b’ side ‘Strawberry Fields’ that “opened a door” for him.

“Let me take you down… because I’m going to…”

He then jumped forward to London year 2000 and browsing through HMV, one of the biggest music shops, which has about 300,000 titles for sale. He only felt a sense of ennui, not the excitement he used to feel when going to his local record shop as a youngster in Scotland. He returned home and attempted to cut up a CD with a pair of pinking shears. After a restless night, he woke with a revelation: from now on he would only listen to new music. Music by people who had never released a CD before. Drummond went to his local independent record shop and bought 5 or 6 Cd’s of this ilk. He kept up this routine, buying between 1 – 6 Cd’s a week, for 10 months.
Then he realised it wasn’t working. He said:

Drummond went down to the bottom of his garden, where, in the time-honoured tradition of British men, he had a shed, locked the shed door and got out ‘Pet Sounds’ by the Beach Boys. By the last track, ‘Good Vibrations’ he was weeping. He even played air guitar. He made a new decision:

” for the next 12 months I will only listen to artists whose names begin with ‘B’.”

This included all genres of music…Beethoven, Bartok, Count Basie, Burt Bacharach, Back St. Boys. And he thought:

This worked pretty well for a couple of years. His family were happy. They always knew what to get him for Christmas and birthday presents. His kids would ask “What letter are you on now dad?”. Then he made a couple of adjustments to this system; he would change the start date to January 1st and he would choose a letter at random from a bag. So he skipped forward and started on ‘P’.
But then he realised it wasn’t working. It wasn’t opening a door.
Around this time Drummond took a trip in his Landrover; he loved the sound of the diesel engine, the different rumbles, the different frequencies. Deep within, it sounded like a choir:

“It sounded like 100 Vikings in my head. For 20 minutes, it was totally intense. This opened a door.”

For the next 6 or 7 years he tried to make those noises into a reality.

He also noticed that when listening to music on his iPod that he was skipping over his favourite tracks. Many other people were too. (I completely understand what he means). Another revelation: recorded music was the problem. Every medium has its era. Recorded music was a 20th century phenomenon. No more consumption. No more recorded music. Only participation.
By this time the hundred vikings had turned into seventeen. 17 builders or 17 electricians or 17 housewives it didn’t matter. It didn’t matter if they could sing or had any musical experience. He took different groups of 17 to New Music festivals all over Europe. There were some contradictions he admitted. Sometimes he used recordings to help create the sound. But he always deleted them afterwards. It is rumoured that Bill Drummond has also erased his entire back catalogue (of the KLF).
In response to questions from the audience, Bill talked about the bagpipe bands that paraded around the town where he grew up.

“Nobody in their right mind would listen to bagpipe music on a CD. But, live, we would have followed that music anywhere. Church bells have the same effect.
This is Year Zero for music. There is very little difference musically between the music of 1977 (punk) and the music of 1964. Pop music doesn’t change, just the technology.”