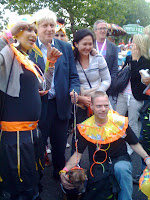 Boris holding the dog on a string. 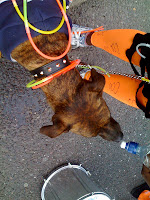 This dog can drink out of a sports bottle.

Most years I go and help out homeless people’s samba band Cardboard Citizens to play in the Thames Festival Parade. Some of them are good drummers but have lost the plot due to various reasons, generally alcoholism, drug addiction or mental health problems. Or all three. Most of the drummers however are beginners, and need a bit of support.

The parade itself starts on the northern side of Waterloo bridge, goes alongside the Thames, crosses Blackfriars bridge and ends up at the National Theatre. It’s a pretty good hike, especially with a large drum. Cardboard citizens colours are black and orange. This year they had made costumes for all of us, with orange day-glo sticks sewn in and a giant puppet. We even had the pre-requisite dog on a string in band colours.
Every year the Mayor of London comes to have his picture taken with the homeless band. Up to now it’s been Ken Livingstone of course. This year it was Bojo…Boris Johnson, London’s very own pin-up blonde.
Now this guys a Tory and although we were expecting his visit, people were muttering that they wouldn’t want to have their picture taken with him because of his right wing politics. That is, until he turned up. Suddenly everybody was crowded around him and my flirtatious friend L (who I have to confess I encouraged to have a snog with Boris) couldn’t resist planting a juicy kiss on his cheek. 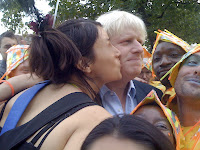 Anyway it’s provided a great deal of entertainment on Facebook with L having to justify herself to all her right-on mates. Sometimes activists can be sooo humourless. Boris looks a bit grin and bear it though, doesn’t he?

L was quite restrained. One woman started to leg-hump him. I wonder if he knew that becoming Mayor would involve this kind of thing? I wonder also if it’s worse for him than Ken because of his randy reputation?
On this march the surdo section started out quite ropey but by the second half they’d got it, they were in the groove. Doing a march like this is like doing a 4 hour practice session. You make so much progress. 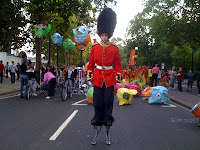 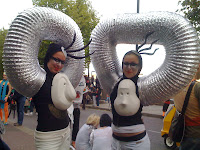 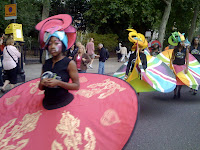 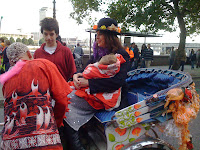 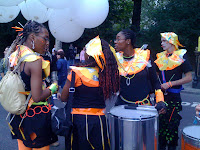