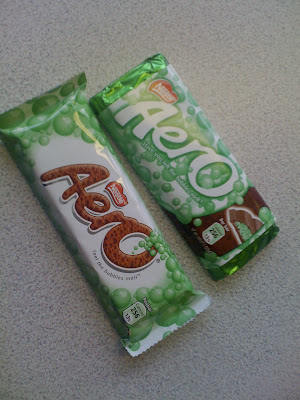 On left, new Aero, on right, old Aero.
So they have changed the wrappers on Aero’s. Extremely disappointing. Which would you prefer? Rumour has it that drug abusers were using the tin foil wrapping to snort/prepare crack. Yeah right. As an anti-drugs offensive it’s pretty pathetic.
Whispa is back, due to popular demand. An 80’s chocolate bar, it was discontinued in 2003. It has smaller bubbles than the Aero. Tasted side by side, the Aero still has my vote, especially the mint Aero with its green insides. But the Whispa is lighter than your normal chocolate bar, which can be just the ticket in certain circumstances.
My mate Nathan and I did the pub quiz last week at the Prince of Wales, Highgate. It was great fun and I loved playing radio announcers with the mike. Plus I got free drinks and got quite giggly on my stool at the bar. Nathan and John did a sterling job with the questions. I did one round on my specialist subject: snacks.
Here are some questions:
1) What product originated in a Cricklewood garage?
2) What sweet substance can cure Shingles, Oral and Genital herpes?
3) Which Milky Way style chocolate bar is named after a novel by Alexandre Dumas?
4) Creme Eggs are the best selling confectionery item between New Year’s Day and Easter. At the beginning of which decade was the Cadbury’s creme egg invented?
5) Frank Muir did the voice over for which Cadbury’s brand in the 1970s and 80s?
6) What French bonbon made by nuns and sold in little decorative tins was Agatha Christie’s favourite sweet?
7) Name all 8 original smarties colours. Which colour was replaced in 1989 and by what? Which is the most popular colour?
8) What organisation recently asked Ben & Jerry’s to use breast milk rather than cows milk?
9) What animal inspired the shape of Curlywurlies? Which comedian did adverts for curly wurly in the 1970s dressed as a schoolboy?
10) Which failed Cadbury’s chocolate bar took it’s name from a South American civilisation?
For bonus points: messages on love hearts: as many as you can think of…
I was anxious when I asked the questions as it was very silent in the crowded pub. But, during the answers,  you know when you’ve set tough but intriguing questions when you hear roars coming from each table, showing that they have been debating intensely. One team came all the way from Canterbury to London for the quiz. 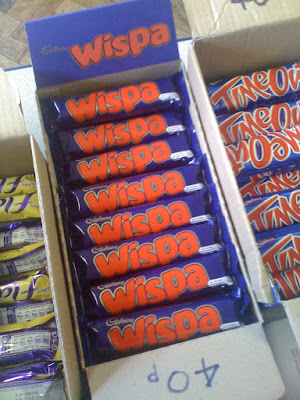