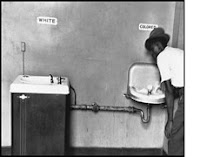 Watching ‘In the heat of the night‘ with my teenager, the 1968 film starring Sidney Poitier and Rod Steiger. Interesting to see my teenager’s reaction to a 40 year old film showing black adult men being called “boy”.

The film touches upon so many issues of race, class and country v. urban life. But the film is not black and white. Steiger and Poitier demonstrate ingrained prejudices and both of them develop understanding of themselves during the investigation. Gaining 5 Oscars including Best Picture and Best Actor, the dialogue and acting are superb.
Poitier is a police officer from Philadelphia visiting his mother in Mississippi. A murder occurs in town and the white police force arrest him at the train station. Why? Because he’s black. Confused by his classy suit and educated demeanor, they soon discover that not only have they got the wrong man but that he is an expert homicide detective. Reluctantly they accept his help. The film follows Poitier as he leads the investigation, despite enormous resistance from within the police and the townspeople. I remember being impressed with the seemingly sophisticated investigative techniques as a kid but looking at it now, it’s not exactly CSI. For instance, he handles evidence with his hands and places samples in his handkerchief.
I had to explain to my daughter that the black people picking cotton in the fields were not slaves, for slavery had been abolished a hundred years previously in 1865 (1833 in Britain). I had to explain that even in 1968, that black people were not allowed into white restaurants or hotels, that segregation existed. I had to explain why, unlike every other police officer, Sidney Poitier’s character was called by his first name ‘Virgil’ rather than Mr. Tibbs, his surname. (1)
There were many other things that needed explaining. This wikipedia link, a timeline of the American Civil Rights movement, makes sobering reading. Things that stood out for me, stuff I didn’t know:
Black people did not gain full voting rights in the United States until 1965.
1968, the British white singer Petula Clark, during a TV show, 2 days before Martin Luther King’s assassination, refused to delete the moment in which she touches black singer Harry Belafontes arm during a duet.
Again in 1968(what a revolutionary year that was) on Startrek, William Shatner and Nichelle Nichols (Lieutenant Uhura)(2) performed the first interracial kiss on U.S. television (although the kiss was apparently forced by ‘alien mind control’).
The last entry in the wikipedia timeline is November 4th 2008 when Barack Obama is elected president.
(1) From wikipedia: 1963: April Mary Lucille Hamilton, Field Secretary for the Congress of Racial Equality, refuses to answer a judge in Alabama, until she is addressed by the honorific “Miss”. It was the custom of the time to address white people by honorifics and people of color by their first names. Hamilton was jailed for contempt of court and refused to pay bail.  The case went to the Supreme Court, which ruled in 1964 that courts must address persons of color with the same courtesy extended to whites.
(2) Nichelle Nichols has many strange links which would intrigue the synchro-mystical crew. She played Lady Magdalene, a ‘Madam’ of a Nevada brothel. Her brother committed suicide as a member of the Heavens Gate cult.