First year with my Aga.
Peeled, topped and tailed carrots, parsnips, potatoes, sweet potatoes. Parboil.
Slice red onions.
Put carrots, sweet potatoes in one tray, added olive oil, cinnamon and maple syrup.
Put potatoes, parsnips and red onion in another tray. Add garlic, olive oil, a tin of tomatoes, salt, bay leaves.
I put the two trays in the baking oven along with a gratin dauphinoise for my teenager.
Then myself, sister-woman and my teenager got dressed up and went to the pub(1) The Black Lion on Kilburn High Road. It is a beautiful Victorian pub, all gilt embossed ceilings and etched glass. It also has bed and breakfast like the taverns of yore.
They were open for Christmas day, for lunch. They have been booked out for two months. Kindly they gave my sister and I free glasses of Cava, even though we were not eating lunch.
Then we moved onto Brondesage, a chavvy sports bar normally populated by Eastern Europeans, where I had an amusing evening a couple of months ago with a fellow blogger who claims to be gay. (At the bar, on that occasion, I met a beautiful gay man and introduced him to the blogger. The gay man flirted outrageously with the blogger who suddenly looked rather nervous. After each snog, the gay man would whisper to me confidentially “NOT gay”.)
Today my sister and I knocked back a couple of shots of Jagermeister liqueur, which is dark brown, sweet and slightly medicinal tasting. I noticed on the menu they had veggie burger with bacon and cheese topping. Slightly defeats the object does it not?
I talked to the bar staff who were still only being paid minimum wage despite working on Christmas day.
Sister-woman, teenager and I staggered home. The dinner was cooked.
So drunk my kidneys hurt, I then fucked up the pavlova I intended to make, by putting in the yolks too. I wondered why it took so long to stiffen.
So I had to turn it into a cherry clafoutis. Which was a bit crap. “A kind of cherry omelette” said my sister. 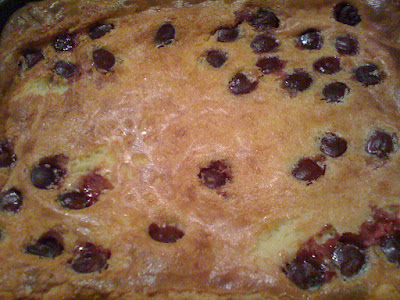 I also did some garlic mushrooms.
Knocked back a bottle of Prosecco.
Living room: movies, snoring on sofa. I dimly hear the noise my phone makes when it receives texts. I awoke and realise my sister has been texting my friends with dirty messages, saying stuff like “I want your hairy flaps”. I then had to text them all to explain that it wasn’t me.
(1) Going to the pub on Christmas Day was an experiment. A friend from Liverpool told me that up North, they all go to the pub on Christmas Day. As we were few we thought it would make things feel jollier. Trouble is, most pubs in London are not open.