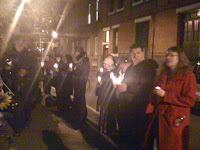 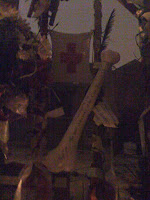 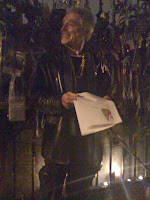 As I described in a previous post, on the 23rd of every month, there is a little ritual at the Crossbones gates of the outcast’s cemetary in Red Cross Way, Southwark.
It starts at 7pm. A bell is rung. Around 30 people are there. One is a black taxi driver called Mick. His cab is parked opposite.

How come you know about this? I ask him.

Well, I was just driving past one day and noticed all these people. I’m interested in London history so I thought I would come. I’m into alternative lifestyles he said meaningfully.

Oh another sub, I thought.

Each person was given a candle. Incense is burnt, offerings are given. The gates have a plaque commemorating the cemetary, placed there by Southwark council. Ribbons, notices, poems, and a bone are tied to the gates.
John Constable channelling John Crow reads a poem then a prayer, hands outstretched. People call out the names of the dead, people they know, who have recently ‘passed’.
Passersby gawp, police cars patrol by slowly.
One old man talks off climbing over the gates into the secret garden in the middle of the night.

He says: You will see things there you wouldn’t believe. Ghosts. This place is very special. I brought a friend who was in great pain with her teeth and gums. She was cured by coming here. Before my very eyes.

Bottles of gin are sprinkled around the gates, the odour of juniper rises from the pavement, reminiscent of the only comfort these poor women had.  We then sing pagan carols.