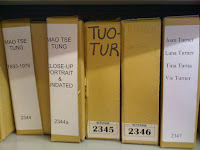 Mao Tse Tung and Lana Turner, cheek by jowl in the archives. 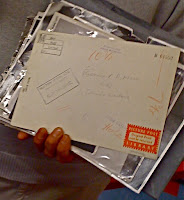 This print is worth thousands, because of the Picture Post label and the stamps on the back. 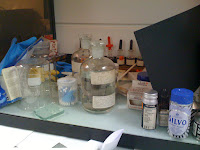 The alchemy of conservation 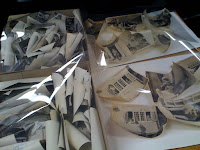 Prints of the royal family by a now unheard of, female photographer, awaiting to be flattened and placed in an archival paper album. 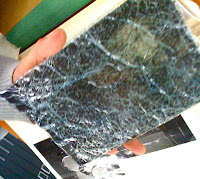 The reticulated print of Eva Peron, and next to it, the restored image. 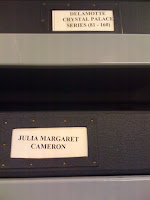 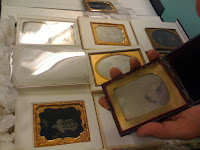 Photographic miniatures, tintypes. At that time, there were many competing technologies.

A panoramic of San Franscisco, before the earthquake.

The Man Ray print. Man Ray was considered a minor photographer before the 1980’s.

I was lucky enough to get a tour of the Getty/Hulton archives this week. The library where I have my rock/pop images, Redferns, has been sold to Getty. David Redfern, the legendary jazz photographer, has finally retired.

It was in some ways like a trip down memory lane. My father had a massive photo library with royal weddings and the Balcombe Street seige, sometimes on 5 x 4 glass plates. I felt a comforting sense of nostalgia as I walked through the stacked shelves, jammed neatly with boxes, their spines sporting historic names and events, hand written in felt tip. The whiff of cardboard, the scent of chemicals, fixer and silver celluloid plunges me into the past.
Matt, who gave us the tour, explained that even in the 1980’s, newspapers such as the Daily Express were simply chucking out their film and print libraries. Getty, fortunately agreed to store them. Now the Daily Express are kicking themselves. Some of the prints alone are worth hundreds of thousands of pounds.
Probably their most valuable print, kept in a special vault of historic prints, is a Man Ray, which lay for years unidentified in a box. One sold recently for 1.25 million.
There are now serious collectors of photography, such as Elton John and Brad Pitt.
A photographer’s back catalogue is his or her pension. The problem today is of course, how to preserve digital photography. Matt said that at recent conferences on the subject, the experts from Kodak had to admit, somewhat ruefully, that the only guarantee of preserving digital images for the future, is to print them out. Yes, we still need hard copies. And nobody is printing anything out nowadays, things are shared and sent via a smoke whisp of electrical pixels. A silver gelatine print, we know, will last 150 years.
We were also showed the conservation room, filled with archival paper, various chemicals in bottles, tweezers and microscopes. It was like CSI for photographers. On various surfaces were curled up postcard size prints of the royal family taken in the 1940’s by a now unknown female photographer. These are almost reportage style pictures of the Queen and Princess Margaret at home.
Getty conservation team consists of one man only: he has to be creative. Given glass plates of Eva Peron, which had been ruined by reticulation (1), he painstakingly soaked each plate in a solution, floated off the thin membrane of silver gelatine containing the image, and placed it carefully on a new pane of glass. Each plate took 5 hours.
Matt also talked of his time working in the BBC library where two old ladies who had worked there for around 40 years confessed that they threw away 19th century prints that they considered ‘saucy’.
The Getty library was formed by John Paul Getty II, who did something useful with his money, donating to the National Gallery and the British Film Institute.
Speaking of the Getty family, I’ll always remember as a child being touched by the tragic plight and angelic countenance of John Paul Getty III, who was kidnapped by Italians who cut off his ear and sent it in an envelope to extort a ransom from his billionnaire grandfather John Paul Getty I. The latter refused to pay the ransom saying that if he paid for this grandchild, then all the others would be at risk also. Harsh but true, although one can scarcely imagine the damage caused by this experience to Jean Paul Getty III.
(1) Reticulation can also be used deliberately and creatively.