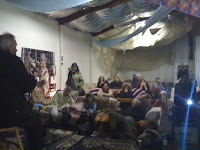 Huddled up on sofas in the Synergy Centre. 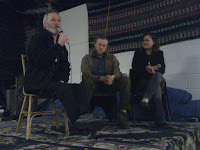 An arse stiffening freezing afternoon at the Synergy Centre, Camberwell but this was alleviated by the beautiful photography of director Michael Bott and enthusiastic commentary of presenter Rupert Soskin for the film ‘Standing with Stones‘. (1)The dynamic Raga Woods organised the event.(2)

The film followed the route, starting from the Lands End peninsula of Cornwall to John O’Groats and the Orkney Islands, of the thousands of standing stones scattered throughout Britain. Whilst Britain has the most concentrated amount of stone circles, cists, dolmens, cairns, cursus, long barrows, menhirs in the world, these sites are global. I went with a Swedish friend who informed me that there are even stone circles in Scandinavia. We can find them on the Atlantic coast of Europe, the Mediterranean, South and North America.
The film was perhaps a little long, being rather encyclopedic. Bott explained that he had a hard time editing out locations, they were all so interesting. Highlights include The Chestnuts in Addington, Kent, (imagine having Stonehenge in your private garden), a computer generated image of what Woodhenge would have looked like, possibly a stadium for spectacles, Stanton Drew, Belas Knap, The Rollright Stones; in Wales, Anglesey (where the remains of an ancient stew containing eel, rabbit, snake, frog and toad have been discovered in a fire pit), Tinkinswood and Castleruddery; in Ireland, New Grange, a fantastic interior but a “1970’s piece of nonsense” on the outside; on the Isle of Man, Tynwald, the world’s oldest parliament (where there is a procession every July 5th); in Scotland, Kilmarten Glen, a lunar observatory, The Recumbents, Grampian, (location of highest number of stone circles using recumbent stones), Clara Cairns, which should be seen, like Stonehenge, at the Winter solstice.
Callanish, on the isle of Lewes in the Outer Hebrides was the favourite, partly because, synchronistically, they happened to arrive at the time of a lunar eclipse. This was the one where they felt the most

“energetic power. But we were completely manic when working. It was not medidative.” admits Bott.

Sean is a dowser, maker of stone circles and one of the organisers of Megalithomania, an annual conference in Glastonbury.

Sean concurs: “I went to Callanish in 1998. The air is thin. I felt on top of the world. So pristine. Salmon are jumping out of the loch. There are strange birds. I’ve never had so many synchronicities in my life as I did there. If you believe in the planetary grid, there is a U.V.G. point at  Callanish. It possesses all 5 platonic solids in it’s geometry.”

Legend has it that ‘black men’ came to the island and built Callanish. It is implausible that the islanders built it by themselves.
Being a Londoner, I was surprised to hear of The London Stone, which is part of a bigger stone, broken in the 18th century. It’s now in a glass box jutting out of a shop in the city. There are various legends connected with it; it was once a pillar of Brutus’ palace, once part of a stone circle. All distances to London are based on the location of this stone.
Evidently Stonehenge and Avebury are the most famous stone circles, partly because they are the largest. Size matters. Wiltshire was the capital of pre-historic Britain.
The first person to revive Modern interest in stone circles was William Stukeley, who inspired William Blake. Stukely posited the idea that stone circles were connected with the Druid religion, however dating shows that the Druids came afterwards. Nevertheless the stones and the sites upon which they sit have continued throughout the ages to be considered significant places of wonder; churches were often sited in the same place.
Bott and Soskin began the project 8 years ago, spent 3 years filming, travelling 8000 miles, the length of the British Isles through all sorts of weather (very evident in the film), cramped together in a campervan. Surprisingly they are still good friends.
At the end of the film the geomancer Sean and the director Michael Bott answered questions from the audience. There was a clear divide between the historians, the scientists, the healers, the anthropologists and the psychic questers.
Sean has built two circles: a stone circle for the Big Green Gathering, which he claimed affected the weather and a wood henge at The Sunrise festival. To do this he

“tunes into the land, looks at the horizon, energy and alignments. I try to bring a maximum amount of feeling. It can affect the landscape up to ten miles away.”

The farmer of the Big Green Gathering land is farming based on experiments done in the United States, where it has been seen that crop yields and seed germination improve around stone circles.
Bott said that his inspiration for the film was ex-Teardrop Explodes musician Julian Cope’s book ‘The Modern Antiquarian’.

“That’s the bible” he says.

(1) Soskin lives at Rennes-le-chateau and is the son of Henry Lincoln who with Michael Baigent and Richard Leigh wrote The Holy Blood and The Holy Grail.

(2)I met Raga Woods years ago at a conference by the National Council of One Parent Families. She created the single parent group Gingerbread.