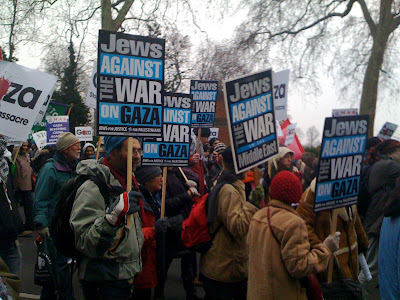 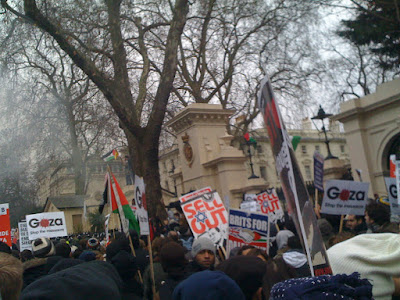 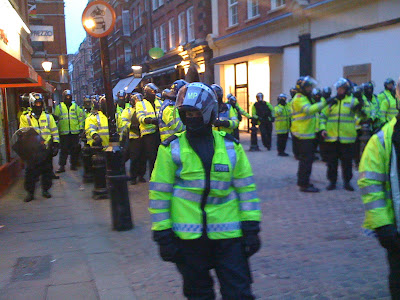 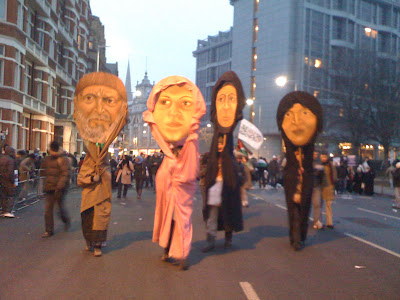 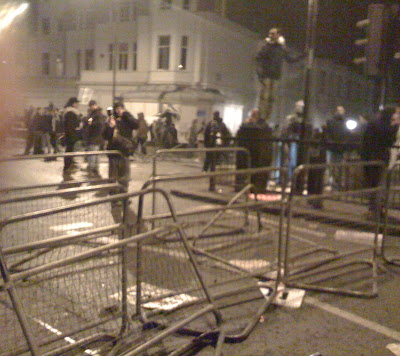 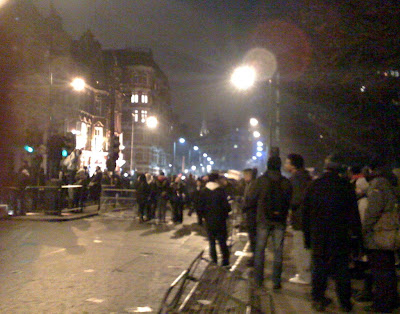 A demonstration today against the Israeli bombing of Gaza. This bombing is Bush’s farewell no doubt… drop a few before Obama gets in?
I joined the march at Lancaster Gate, it had come from Marble Arch. As I exited the tube, I could see hordes of people, not just women in headscarves and men in Palestinian scarves, but also Jews holding placards, stating their opposition to the bombing.
It was so cold, snow was falling but not settling. One sensible man had a flask. The chant went up “Free, free Palestine”. Freeze, freeze for Palestine, more like, I thought.
As we neared the back of the Israeli embassy, people sat atop the gates and burnt flags. Huge clouds of smoke emanated from the embassy and panic ensued.

I have been in tear gas riots in Chile, during the period that Pinochet was removed from office. It wasn’t tear gas but it did make me feel light-headed. Some kind of soporific?
Accompanied by Ms Canal Explorer, who valiantly sported glittery eye-make-up for the cause, we made our way to Kensington High Street where we finally found the samba bands.
Drumming kept us warm at least.
As it grew dark, Muslim teenagers dragged the barricades across the road and started to throw sticks. Intifada in Kensington? Police on horseback moved towards us threateningly, but horses are helpless against barriers. Riot police heaved.
Police vans, more like tanks, flew to the action, but were stopped by barricades placed in front and behind and across the windscreen. Things were getting heavy…
We are in the poshest part of London. They do not want smashed windows here. Lets not frighten the tourists… milling towards the Science and Natural History museums in South Kensington. Hotels glittered with Christmas decorations still. Some of the most expensive properties in Britain line this route.
After 4 hours in the cold, I made my way home.