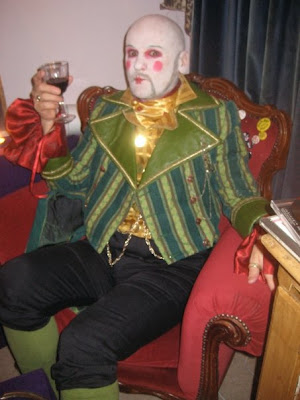 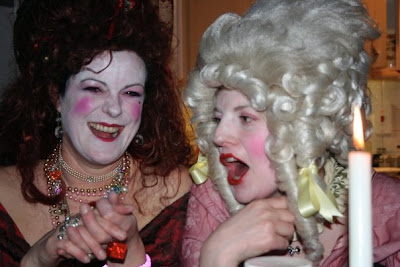 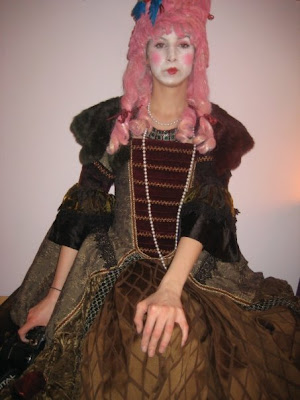 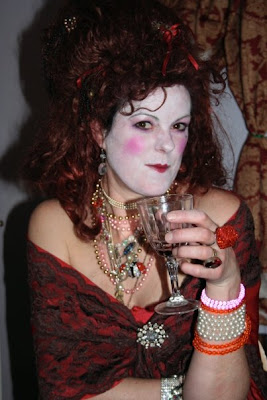 Another home restaurant I visited, part of a short series of one-off themes, was the Marie-Antoinette dinner at a third floor flat in Hackney, East London. It took a while to find the place, several laps around the one way system, before slipping through a tiny opening into a car park, the difficulty adding to the adventure. Stumbling through the dark we came across another guest, equally clueless as to which flat in the modern 1980s block.
The hostess did not cook dinner, as she said

She had a professional chef cooking in their little ‘cuisine Americaine’ in an alcove off the living room.

“He’s the help” dismissively waved the hostess in character.

The flat was atmospherically decorated: walls draped with mock Versailles style curtains and tables lit with chandeliers, although the laptop in the corner slightly took away from the 18th century look. Nicholas, a professional costumier (he has dressed Madonna and says she is aloof and professional even when he is measuring her inside leg) sat in an armchair in the corner, sipping champagne. He took care not to smudge his heavily made-up face, white foundation, red lips and heart-shaped beauty spots.
Tamsin, a burlesque performer, perched stiffly, her bosom jutting out of her heavily laced bodice, a massive dark curly wig balanced atop her head. The hostess Emily wore a tall white wig and pale blue drapery.
This is a tough dress code. One woman came in Spanish attire and while I did my best, I could not compete with the others in terms of authenticity. Another fille sported an enormous pink wig, studded with bijoux and ribbons, an 18th century Amy Winehouse.
As the candles burned low, we made small talk, salon chit-chat, like something out of Molière’s ‘Les precieuses ridicules’. The tendency was, getting into role, to speak a kind of Franglais. Jewellery was rattled and pinkies were cocked.
Women were seated alternately…big dress, small dress, to fit us all 10 of us  around the oval table.
The wine was served in jugs, accompanying an hors d’oeuvres of salad. The main course consisted of quiche, gratin dauphinoise and vegetables. Dessert was warm tarte tatin with cream served on a silver platter. We brought our own wine. The food was excellent but we were still hungry at the end.
No matter, the real thrill consisted of the strangeness of being in someone elses home, getting to know them.
I asked Emily where her live-in partner was.

“Oh he’s gone down the pub” she said cheerily in her Irish accent “this isn’t his sort of thing”.

Looking around the flat “How long did it take you to make it look like this?”.

“All day. And weeks to find the stuff and the costumes. We were glad you were late as we weren’t ready yet” replied Emily.

At about 11pm, booze running low, some of the women swayed to the off-licence in their crinolines and wigs. In retrospect I should have accompanied them, just to see the reaction of the shop-keeper.
At midnight chairs had to be returned to the neighbours “or they will turn into pumpkins” quipped Emily.