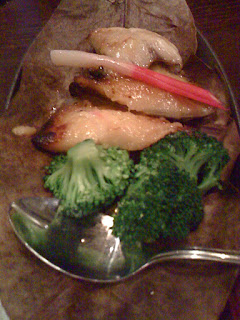 The black cod served on a leaf, with a strange red vegetable that turned out to be ginger. Delicious. 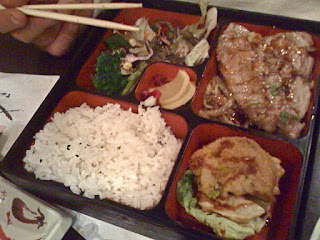 Tuna bento box, not as good as the salmon one 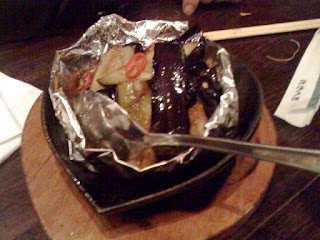 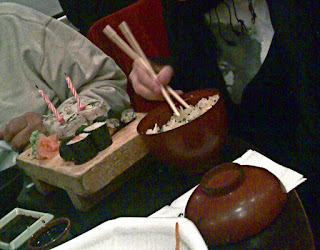 They put birthday candles in my teen’s sushi

I discovered this Japanese café last year, via a bloke who dumped me. The dread-locked mathematician. In fact I think our last date took place here. He wouldn’t look at me properly and seemed uninterested in everything I had to say. Then we went to the cinema opposite. Afterwards, I had optimistically brought my toothbrush, I expected to stay at his. He said he had to work. I drove home, crushed, anxious.

I did not impress the guy but the café impressed me.
Opposite the Camden Odeon, the Bento café is reasonably priced, lively, unpretentious and has fresh food.
My picks: the salmon salad (very fresh with a tangy dressing), the salmon bento box (around £8), the aubergine dish (soft and succulent) baked in tin foil, the black cod.
I have since had a couple of disastrous dates there with different men. The most recent of them said he liked Japanese food. So I suggested the Bento café, I got there on time. He was late. I was looking at the food of the table next to me and got chatting with the couple. They offered me a taste, they were nice. When my date arrived he looked annoyed. I couldn’t understand why.
He said he knew about Japanese food, but once in the restaurant he irritably asked me to order for him. Then he complained about everything, demanding:

“Where is that spicy sauce they put with Japanese food?”.

Racking my brains, trying to understand what he was talking about, it eventually dawned on me that he knew nothing about Japanese food. Next he told me off for eating more sushi nori than him.

“How many have you had?” he asked testily, glaring at me.

“NO YOU HAVEN’T” he insisted. “YOU HAVE EATEN MINE”.

Dropping the piece of sushi at the end of my chopsticks back onto the platter, I stuttered an apology. Not the ideal first date.
Later I realised that I hadn’t actually eaten more than him. It was some kind of ‘domination’ game. I found out that this nursery school teacher was a ‘master’. I wasn’t aware that the role play had already started in the restaurant. He was ‘domming’ me over the food.
It must have worked because, in a stupor, I went back to his place. He’d said online that he was keen on gardening. We looked at his small patch of greenery at the back of his teensy cottage in Tottenham. Back in the house, he picked up a bamboo garden cane and started to smack it slowly and rhythmically onto his hand. If I am going to be whipped I certainly don’t want it to be with a piece of gardening equipment. Then it snowed. I endured some dubious sex which I entered into as if I were a witness to a play. He said:

“You are not allowed to orgasm unless you ask permission”

Inside I was giggling but I pretended to play along. This was the year of the slut. I was observing really.  Learning about men. Most of them aren’t very nice. Women who are married to the same men forever live in a dreamworld. They don’t know anything about men. Try dating in your 40s. Then you get to know what they are like. Especially on the internet. Ruthlessly critical of women, entitled, amoral, liars. When they aren’t beating you up or killing you. Don’t ask a single mum about men. You won’t get any good stories.
In the middle of the night, I got up and went to my car. The snow was thick and I was worried it wouldn’t start. Naturally he hadn’t accompanied me to see if I was ok. The car started, and I drove slowly back to Kilburn.

And the ‘Master’ didn’t even know what wasabi was.