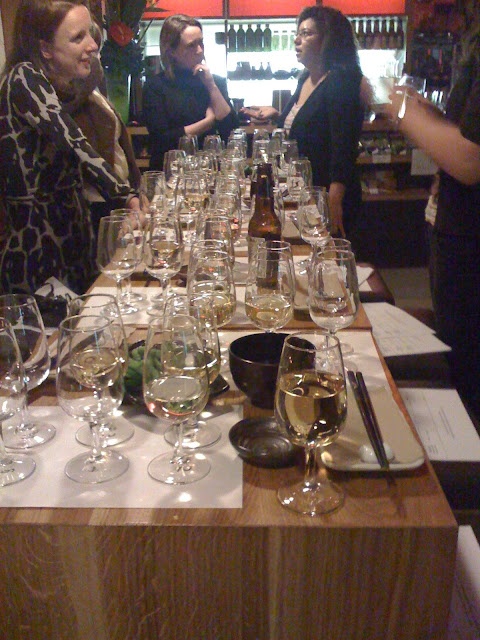 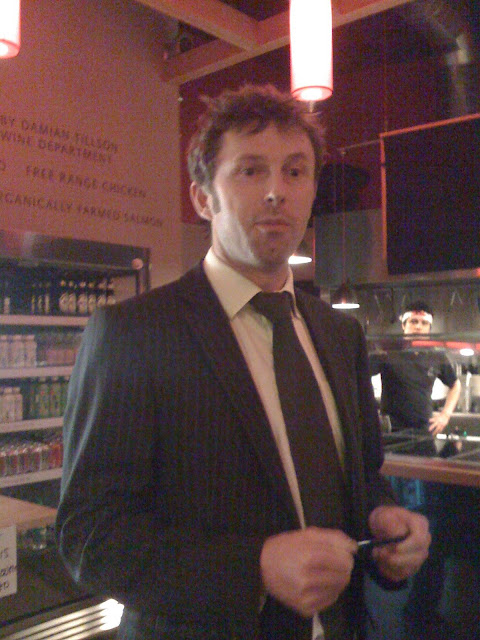 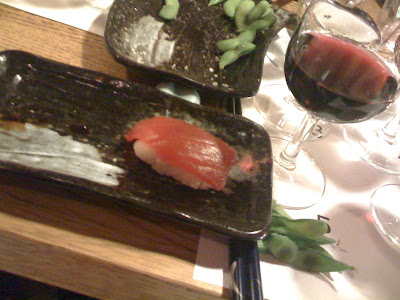 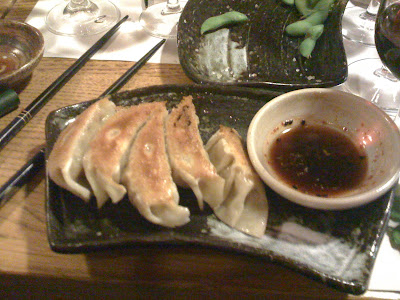 At Tsuru Japanese restaurant, near the Tate modern, they have drafted in Damian Tillson, Deputy Director of wine at Sothebys to pursue the wine buff holy grail… what wine do you drink with sushi? Damian chose six different European wines, three whites, one rosé, two reds.

“I’m a Europhile”, he explains. “I chose these wines because I love them. Matching wine with sushi is not easy” he admits”fish is delicate and a big powerful wine can knock sushi out of the water. One also has to work with the unique textures of sushi and sashimi, the wasabi and the pickled ginger.”

The usual pairings with sushi are beer and sake. Tsuru are aiming to:

Damian spent a long evening with Emma Reynolds, the owner of Tsuru, trying out wines. Dirty job but someone’s got to do it eh?
We had a sheet of paper in front of us with numbered squares. Each square contained a generous ‘pour’ of wine. Damian would pose us questions as we tasted. In fact it was a bit like a wine pub quiz but in rather more classy surroundings.
The first two white wines cut through the acidity of the fish and the rice.
The third white wine, the Macon, was soft and buttery. To drink alone, I liked this the best. However it probably didn’t go as well with the sushi.
Damian, realising he had both wine experts and novices there, gave us a little talk on how to taste wine.

“Hold up your glass. Check the wine is not cloudy, has no bits.  Smell it. Don’t agitate it. Taste. Only after smelling and initially tasting, give it a swirl. This will amplify what you originally tasted. To taste properly, take a teaspoon amount in your mouth, slurping it up. After maintaining the wine in your mouth for a little while, spit it out into the spitoon provided”.

I used to photograph the celebrity wine tastings for Cosmopolitan magazine. It was great. You’d be amazed how much slebs open up when they are pissed. I also got to taste some very good wines under the tutelage of their wine expert Rosemary George, one of the first female wine masters in the UK. I had to make sure I only tasted at the end of the session otherwise my pictures would be out of focus. But I could never get the hang of the slurping, and was understandably reluctant to spit out.
Most of the people at this Tsuru wine tasting session were women. And us girlies do not like to spit in public. The spitoon remained unused.
Damian talks about the “friendly prices” at Tsuru. Their mark-up on both wine and food is very low compared to most restaurants.
The ‘Entre deux mers’ (Domaine de Ricaud 2007) Bordeaux is pale yellow, fruity and acidic. Damian gets poetic “This is a ‘nervous’ wine. Tingly”. It’s mesmerising hearing him talk about wine, his passion.
Next up is a Sancerre (Domaine Bailly-Reverdy 2007) from the Loire. One hundred per cent Sauvignon Blanc, this earthy wine probably matched the best with the sushi.
However I preferred the Chardonnay Macon Verze (Domaines Leflaive 2007) fermented in oak barrels at a finely priced £29. My kind of wine. Oily, floaty, slippery.
Damian”I chose this to not have an acidic wine but one which will still stand up to the sushi. This is rather racy.”
I hear Damian say “Everybody likes rosé”. Only chavs, I’m thinking. I only like rosé when it’s hot weather. But have too many memories of kidney-hurting rosé sessions when I lived on the Cote d’Azur. This Provencal rosé (Domaine Pique Roque 2007), pale salmon in colour, is nicely paired with rice wrapped in sweet tofu pouches. Damian admits that this wine is “not too intellectual”.
I’m starting to have difficulty in retaining concentration. I really should have used the spitoon. People are getting noisier, a teensy bit rowdy. Damian has to tell us off.
Moving on to the reds, we are given a Cote de Brouilly (Domaine Georges Viornery 2007).

“People are snotty about Beaujolais. Red are difficult to match with delicate food because of the tanins” he continues.

Not me. I fucking love Beaujolais. But then I’ve spent considerable time in the region and it’s always better when you visit the vinyards, Fleurie, Brouilly, Chiroubles, St Amour, Julienas, Morgon, Mercurey, Moulin à Vent (latter on the border between Beaujolais and Bourgogne). Just writing the names down puts me into a similar reverie I experience when I hear the shipping forecast. Every Sunday in the Beaujolais region, you get car loads of pissed people trying to sober up on the lawns outside the ‘caves de degustation’.

Lastly we move on to an Italian wine, La Tunella (Colli Orentali del Fruili 2005). I taste green pepper, peat, leather…
Krista of Londonelicious food blog, who is sitting opposite me quips

We are getting silly.
My last recorded note for this session is of Damian confessing sweetly “I can’t afford to drink the wines that I sell” for Sothebys.