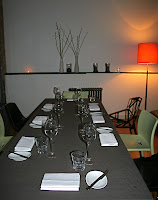 The loft supper club, the creation of Nuno Mendez, chef at Bacchus, is probably the polar opposite of what I do. It’s modern, masculine, both in cookery and design. The staff and chef are highly professional; the price at £100 a head is out of reach of most people except the most dedicated foodie. It is worth it though. The attention to detail, the unusual food combinations of the dishes make this an exclusive and original experience.

Nuno, originally from Portugal, has trained at El Bulli in Spain, the United States and travelled all over the world including Asia

In fact he says “I use Japanese ingredients more than the food from my native country”.

The loft started on February 17th. Nuno will be opening another ‘official’ restaurant in 2010. This living room restaurant is testing dishes for the new restaurant. Nuno likes the fact that he can get up in the middle of the night, inspired by an idea, and walk down to the kitchen to try it out immediately before the idea evaporates in the morning.
I arrived at 7.30pm. There were 8 guests that night. An elegant table was laid with modern 60s architectural style chairs. We were given a glass of Prosecco. The other guests were food bloggers, restauranteurs, Americans, urbane educated people who love food.
First ‘dish’ a lychee Martini, vodka in a cocktail glass with lychee juice, lemon grass, Sansyo pepper and a few drops of hazelnut oil. Interesting. Not mad about lychee juice. But that’s the thing about a chef’s tasting menu. You won’t like everything but it’s great to be part of the experiment. Often the flavours of Nuno’s cooking contrast, clash, shock… 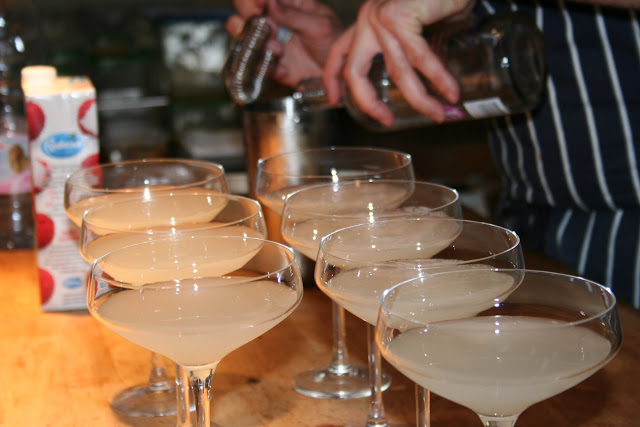 At 20.18 we were given our first bite to eat…a light gougere (cheese puff to you) hot out of the oven.

Then we were given a spoon with a fresh chunk of tuna covered with mango. Sounds weird but worked. Nuno gets his fish from Atari-Ya in Acton and a Japanese stall-holder on Brick Lane. He generally spends around £200 on ingredients and £60 on wine for a dinner.

In between courses I chat to Nuno, a ringside seat, while the guests sat down at the table. Guests are welcome to get up and have a look at what he was doing.

“I’ve been working in open kitchens all my cooking life so I’m used to it” he says confidently.

For 8 to 10 people Nuno needs at least 3 people working including himself. (I’ve worked out that’s a minimum for me too).
Despite the differences in style, I recognize the trappings of a home restaurant…the stacks of fruit juice boxes and coffee bought in bulk. The rows of glasses and cutlery.
Every time something is served Nuno is precise with the waiting staff:

“the edge of the knife should be facing inwards”

“the spoons must be laid out this way” 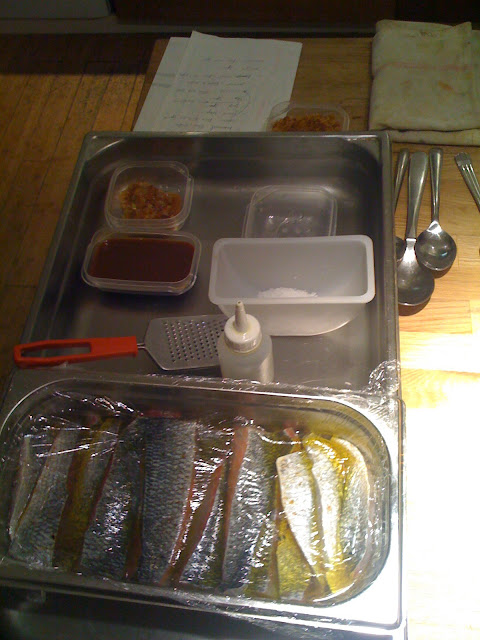 He has two enormous chunks of steak. He and his Brazilian assistant, Juan are seasoning it:

I can see it’s going to be a long night.

Marinated mackerel, avocado, daikon and crisp ponzu is our next course. The mackerel has been marinated in olive oil, orange zest and soy sauce.

Nuno tells me that he preps for two days for this dinner. He buys most of his produce locally, in Brick Lane.
I watch him…his mandolin work is spectacular…fine shavings of this and that to decorate each plate. Again, I cannot emphasize enough the precision. Even the way the plates are put on the surface for serving is done delicately and accurately. Nuno holds up a dish, turns it one way, then another, then states to the waiter:

“it must be served this way round, the mackerel on the left, facing the customer like so”. 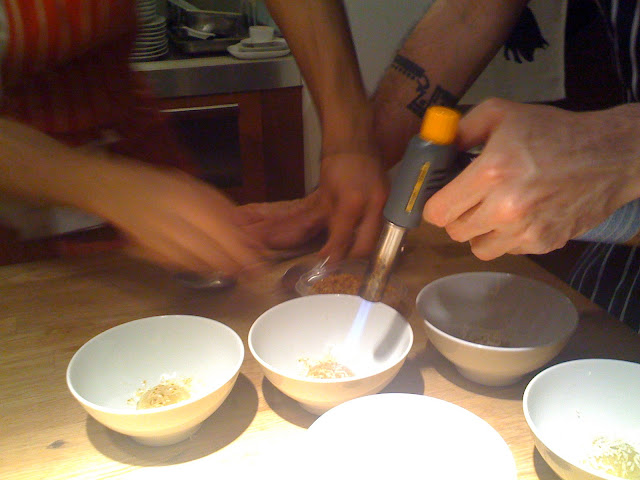 Lets be frank. It sounds disgusting. The stuff you skim off the top of your gone-cold hot chocolate. I tasted. Weird. Interesting. A yes-no conflict. Kind of good. Combined with the tiny diced raw squid, the diner is confronted with contrasting textures. It works. I think.
Nuno appears to have several different types of cress ‘chiso’ for instance. I had no idea there were that many types of cress. 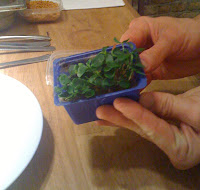 Seared gambon, chunky miso fennel, prawn juices and orange: this prawn dish is pierced through, kebab-style, with a plastic pipette which contains the prawn essence. The idea is to eat the prawn while squeezing the bulb of the pipette into your mouth. Again, original food, amazing concept. I don’t really like the idea of putting plastic into one’s mouth (I’m very anti-plastic). One woman was a little over-enthusiastic and burnt the back of her throat.

Onion soup moderne: I tried a spot of spherification myself recently. It’s a spectacular technique. Nuno has distilled all the taste of an onion soup into an egg yolk like sphere with a little breadcrumbs on the side to represent the cheesy bread you usually get on top. I commit a faux-pas by not downing it in one. It is supremely oniony. But I would still prefer an actual soup a l’onion, texture-wise. Again, it’s an experiment, so this is all part of the fun.

Cauliflower and onion hearts, breakfast radishes and Tobiko butter: this is one of my favourite courses, the cauliflower miraculously manages to be simultaneously creamy and crunchy. It is decorated with flying fish egg roe, Tobiko. 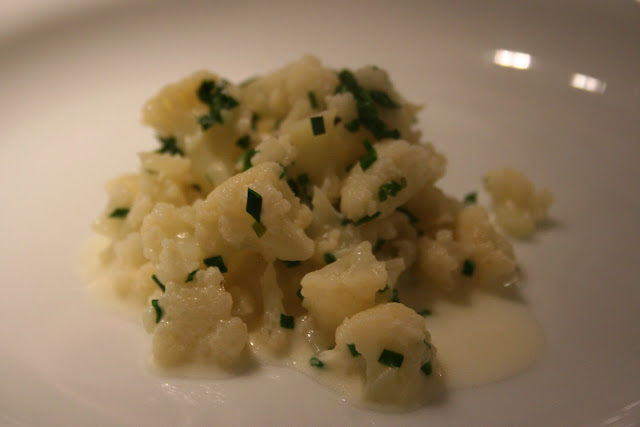 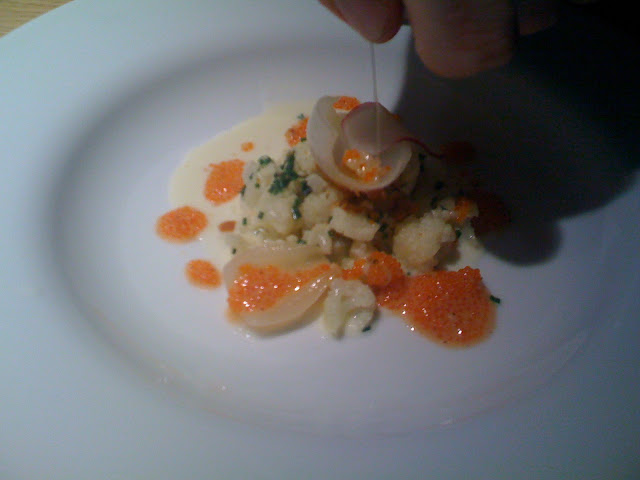 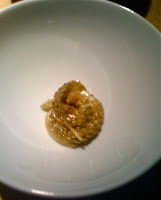 Thai Explosion: is a Tom Yam soup with slow cooked quails eggs. Nice. Seems quite traditional when compared with the other courses.
Seabream, lamb belly and mussels, herbal kappa: a molecular surf n turf dish. I obviously didn’t have the lamb belly, being a non-meat eater. Right, I’m going to go out on a limb here. Yes, it’s all fab stuff, very revolutionary, molecular gastronomy blah blah. But for me the hands down winner of the night was the seabream. It was without a doubt the best piece of fish I have ever tasted. And this is more down to the fact that a Portuguese chef knows what to do with a bit of fish than any amount of fancy-pants techniques handed down from Ferran Adria. It’s his mum or his granny that taught him how to do that, I’ll swear.
Have absolutely no idea what kappa is. According to wikipedia, they are child-sized humanoids. Well, that is certainly original, including fairies and goblins, in your cooking. But all cooking is folklore so why not?

This is the herbal kappa. It has been turned into a gelée with sodium alginate. It tastes a bit like lasagne.
Ribeye of beef, mushroom caramel, enoki and nashi pear: didn’t taste this. Expect it was good. Tried the mushroom caramel which was sweet and mushroomy. You’ll have to go to this carnivore’s review to find out.
Orange skin purée and lemongrass royal:served in a shot glass, the ‘orange’ of the dish was in fact the inner part of an orange, the white stuff. And it was good! Creamy, subtle, frothy, orangey without the citrus somehow. 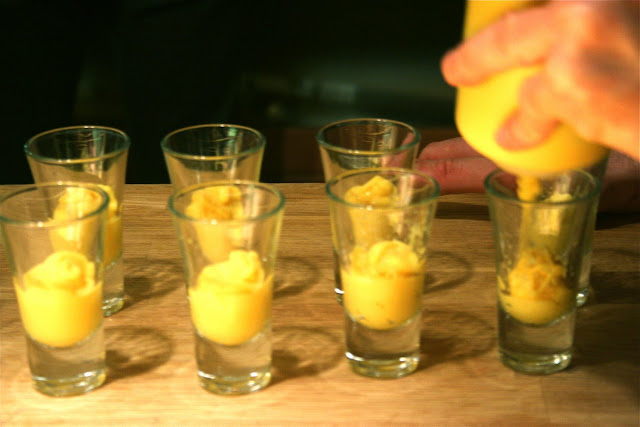 White chocolate, black olive and passion fruit: sat down for this last course, my feet were killing me and I knew I had to cook for 25 people the next day. It was nice as I got a chance to chat to Krista of Londonelicious.

“You’ve eaten at Bacchus, Nuno’s restaurant, haven’t you? What did you prefer?” I ask her.

“Oh here definitely” replied Krista ” because I love the way that Nuno will describe each course to you personally. The contact with the chef is great!”
We tasted our dessert. “That’s olives isn’t it?” expressed one guest with surprise. Sweet olives, another tastebud challenging combination that works.
Nuno joined us. He looked tired but happy. He now had a glass of wine in his hand. Like me, he allows himself a drink after the main course.