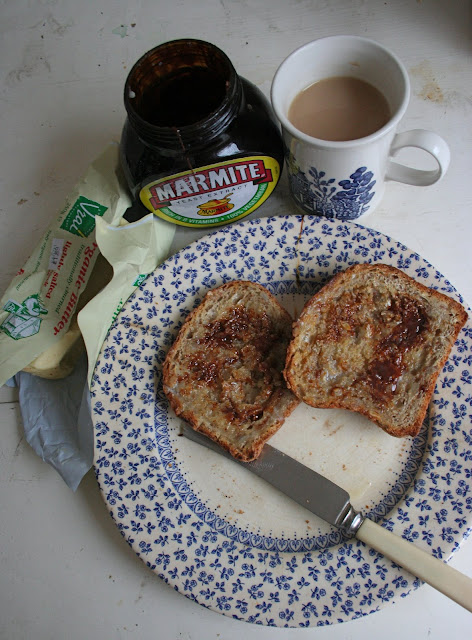 For my money the best breakfast on the planet. This is desert island food. I’m a Marmite baby, my whole family was brought up eating Marmite. My brother would consume an entire loaf of bread, butter and Marmite when he got in from school.
My favourite bread is Vogels Soya and Linseed. My favourite butter is Brittany sea salt (Tesco’s finest Brittany butter is a good option in the UK) with large salt crystals that you can crunch.
My favourite condiment is Marmite. I know Australians and some New Zealanders prefer Vegemite but for me, Marmite is tops. I guess it depends what you were brought up with.
I’ve had Marmite in India, made in Indian factories. It was a lifesaver but had a slightly different taste. On another trip, whilst halfway through a year in South America, I met a woman who had just flown over from Britain. She had a pot of Marmite. I eyed it lustfully. She noted this, and charitably said that she had brought two and that I could have one of them. It’s hard to describe how good, almost a relief, it was to have some Marmite after six months of deprivation. Marmite also contains vitamin B12 which some claim repels mosquitos.
Here is a great link to Marmite history and information. For the record, I’d like to state the Marmite in a squeezy bottle is not as good but will do in a pinch for camping trips.
I’ve not tried a Marmite crisp sandwich, apparently popular in New Zealand. Great combinations include Marmite and tahini on toast, Marmite and melted cheese on toast, Marmite and tomato on toast.
I haven’t yet tried it on icecream as a topping but this is surely good… I must have a taste for umami foods, one of the five tastes (the others are sweet, sour, salty and bitter)  as I also like parmesan, soy sauce, anchovies and salty liquorice. Salmiakki is the most orgasmic Finnish chocolate, filled with liquid salty liquorice.
I’d like to do a Marmite themed dinner for The Underground Restaurant. The chocolatier Paul A. Young makes Marmite chocolate truffles….mmm.
There will of course be some Marmite and cucumber sandwiches for The Underground Tea this Sunday.