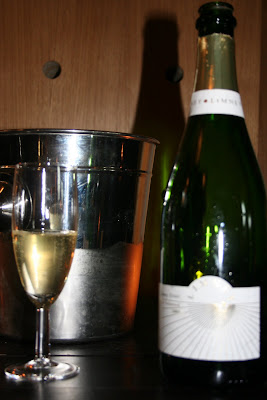 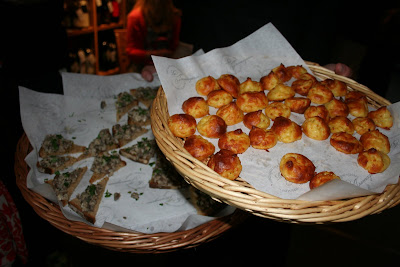 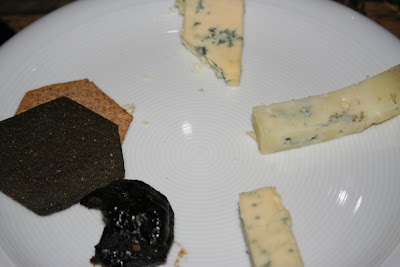 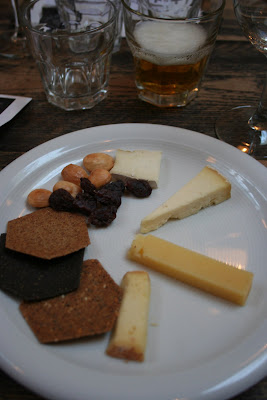 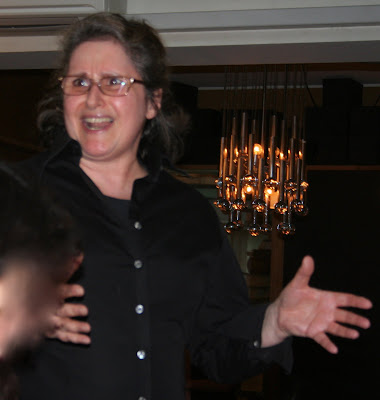 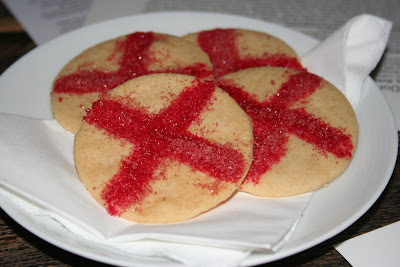 The St. Georges day shortbread, decorated with the cross of St George.
St George’s Day Cheese and Wine tasting at La Fromagerie, London. St George is the patron saint of England, although he originated from Syria. He is one of the most popular saints in the world, famed for defeating a dragon. St George embraced openness and thoughtfulness. He supported the poor, the rich, farmers and soldiers, especially in times of war.
This evening was themed around cheese and drinks from countries with which St.George had connections or had visited. The cheeses are all early Spring, light, fresh and tangy.
We started with Sussex champagne: Limney Sparkling wine 2000 (Rotherfield)made from Pinot noir and Auxerois grapes. It’s not cheap at £23.85 a bottle. The programme says it has notes of lemongrass. They aren’t kidding. I yearned for the addition of crème de cassis of which I do possess a miniature handbag sized bottle. Patricia Michelson, the owner of La Fromagerie declared that many vineyard owners from the Alsace-Lorraine area of France are buying up parts of Sussex, so impressed are they with British wines.
This was accompanied by tiny gougéres, light and creamy, using Emmental and Comté, and Poilane bread triangles topped with mushrooms, lemon and parsley. Of course it would have been more appropriate to use St Georges, one of the first maturing edible mushrooms of the year, in late April, but they were not yet ready.
British cheeses have less of a reputation than French cheeses, wrongly, it turns out, for many famous French cheeses are actually based on British techniques. But at present British consumption of cheese is only a third of the French.
On a cheese tasting or cheese plate in a restaurant, you always work from 12 o clock clockwise, in order of strength, from mild to strong.
The first cheese was from Berkshire, ‘Wigmore’ the rine hand-rubbed in water so that it is not too thick. A ewe milk cheese, it has a silky, earthy, glycerine richness that works well with beer.
The second, a Wensleydale Cheshire cheese ‘Richard III’ ( the area that this king was born) is the oldest British cheese. It was originally made by French monks from Roquefort who had come over during the Norman Conquest. The French Cantal is very similar to Cheshire; the same technique is used; prodding the cheese with needles to expel the water. I loved all the historical references in this tasting; it made me feel as if I were chomping my way through the crusades.
Thirdly we had a Lincolnshire cheese ‘Poacher’ (the name comes from the unofficial county anthem) that looked like a cheddar but came from The Fens. They cut the curd, the cheese is pressed and therefore nutty. It is very British in style; with our mild weather, we like a tangy bitter cheese. This area of Lincolnshire has very dry summers, for that reason all the cheese are made before June. This is the most aged cheese before the season slows down, one of the best in England. Again this matches well with the hoppiness of beer.
Then we moved across the water, to Ireland, Ardrahan. This part of Ireland likes to brine-wash the rinds. The cheese is affected by the sea breezes, the lush grass, the soft rain. Roasted almonds marry well with this cheese.
This first course was matched by a Chateau Sancrit 2005, Bordeaux (Saint-Andre-de-Cubzac) and a Carmelite beer, Tripel Karmeliet, Buggenhout, from Belgium. Bordeaux is a particularly British part of France; the UK are the largest consumers of Bordeaux in the world. We ruled the region for 300 years (1154 to 1453), most famously during the era of Eleanor of Aquitaine.
A second plate of dairy travels started with  Limburger cow’s milk cheese, Zurwies, from Germany. Patricia Michelson has just discovered real German cheeses.

“Most of them are awful, industralised, produced in massive quantities”

she says candidly. But there remain little pockets in Germany still where they are making cheese by hand. This cheese is not heavy or strong and matches well with rye and caraway biscuits.

Moving further south, a lovely ewes cheese, Garrotxa, Borreda, from a tiny farm in Catalonia, near El Bulli. The cheese looks like an old stone; the milk is heated, and the cheese grows a dark suede-like mould, then it is brought into a cooler humid fridge. After six months it is ready. The cheese loses a great deal of weight and is therefore full of protein. This cheese represents a region that has struggled to maintain it’s identity through war and dictators. The Catalan people are reclaiming their countryside, St. George would have approved. I absolutely adored this cheese but then I love goat and sheep.
Returning to Germany, we taste a tangy Adelegger Urberger, a gruyère style cow’s milk cheese from Bavaria. A hard cheese like this can work with white wine.
We accompanied this plate with a gros manseng wine from South West France, Domaine du Tariquet, Cotes de Gascogne, which almost tasted German. (As an aside Patricia Michelson said that it matched well with asparagus which is notoriously difficult to match).
Moving onto blue cheese, again from Bavaria, Bad Oberdorf, Allgau.

“This is actually what a cambozola aspires to be…rich buttery…fantastic for sauces” says Patricia. “A great recipe is to mix it with butter and herbs, roll it up, freeze it and cut off little rounds as and when. This cow cheese is great on a burger.”

The second blue, made from ewe’s milk, is from the Pays Basque ‘Zelu Koloria’ (Basque for ‘colour of the sky’) The season for this cheese is 7 to 8 months from February until the end of the year at which point it is very strong. On St Georges Day it is still quite mild.
The last is a Colston Basset Stilton from Nottinghamshire. A fabulous cow’s cheese, made with a different style of rennet. Rennet separates the curds from the whey and is a vital element for the cheese maker. Nowadays so many cheeses are made with vegetarian rennet but Patricia Michelson prefers the traditional method. With this cheese you have the full flavour of the white and the blue. The mould marbles through the entire cheese, giving the look of an earth-like stone.
These cheeses are accompanied by a dense treacly Calabrian black fig “made in the toe of Italy” a lovely image that suggests tangerines in the toe of your Christmas stocking.
We end this St George’s day tasting in Portugal, a country that also has St. George as their patron saint, with port, Quinta de la Rosa,  the perfect match for blue cheese.
Finally shortbread biscuits were served decorated with the red cross of St. George.
The origin of the St George’s Cross came from the plain white tunics worn by the early crusaders. It became the national flag of England in 1277. The England football team still wear it today (although beaten by Portugal at the last world cup in a battle between nations protected by St George).
I highly recommend a visit to this shop, an enchanted cheese kingdom. Patricia Michelson’s book The Cheese Room is a fantastic journey through Europe, a guide to cheese and recipes. I am constantly dipping into it. She is working on a new book. I can’t wait. All in all, a fascinating evening, where you are led by the hand by an expert, through history and cheese tasting. My only complaint was that the portions weren’t large enough for me. At the end I was still hungry and had to go to the chippie!