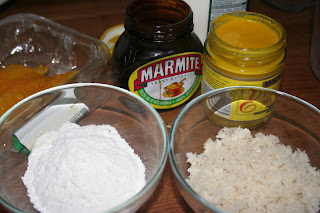 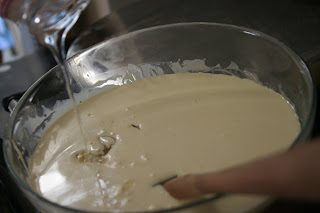 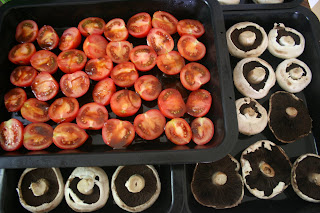 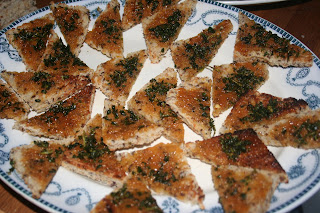 Marmite on linseed toast with crispy seaweed: the caramel flavour of the seaweed and salty Marmite worked well together 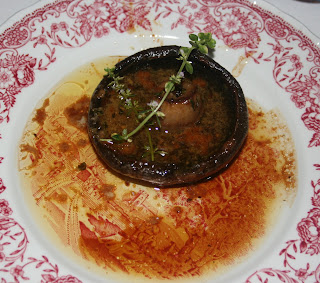 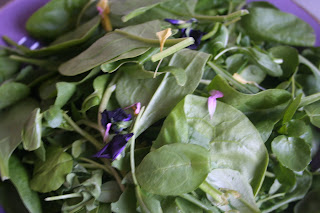 Rocket, spinach and watercress salad with Marmite and lime vinaigrette, plus violas to decorate 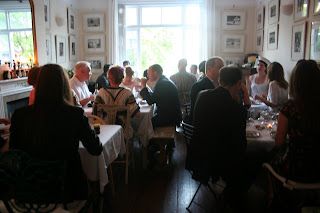 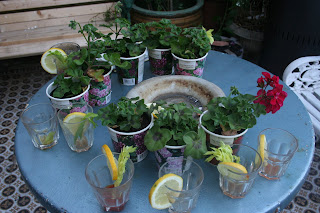 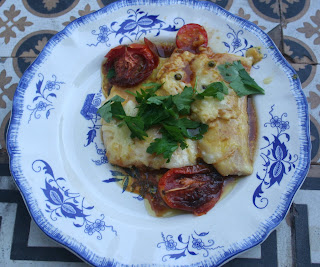 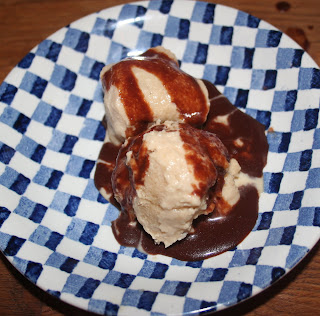 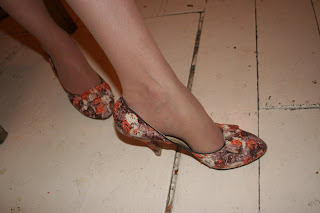 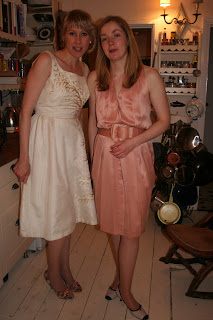 Guest in vintage dress and Porridge lady in shell-like silk 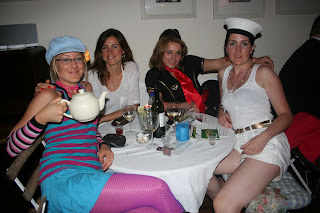 Petra chocstar and her crew. Petra was going to smother herself in fake tan in homage to Marmite…
It had to be done. With a moniker like MsMarmitelover I had to do a Marmite evening (and I didn’t even offer the option of Vegemite). But I promise it was a one time thing …
This evening’s dishes probably took more practising than any other night. Marmite is such a strong distinctive taste and I was conscious of one guest writing to me, only half joking, saying that he would bring his high blood pressure medicine just in case…
The menu was rather daunting…Marmite in every course. My approach was to use Marmite as a seasoning, as a replacement for salt. In terms of matching flavours, I thought of Marmite as akin to soy sauce, which is why I conceived the idea of adding lime juice to the Marmite vinaigrette.
The smoked haddock rarebit needed several goes before I was happy with it. I abandoned Gary Rhodes recipe, too complicated and it looked messy and unappetising. In the end I merely spread English mustard and Marmite on each undyed piece of haddock then grated cheddar cheese on top, adding green pickled peppercorns.
I also, as well as thinking of Marmite as an ingredient, thought of the iconic pot and label design when presenting dishes therefore the main dish was yellow, brown, green and red.
The Bloody Mary Marmite drink went down well, one table asked for seconds.
On another table, one man and his Spanish friend admitted to hating Marmite, but they enjoyed the Marmite on toast appetiser.
Two people cancelled by email at 19.35 pm asking if they could come another time.

“Very sorry but it really is too late” I replied.

A home restaurant has no walk-in business. I’ve bought and cooked the ingredients already. It’s a fixed menu. The theme was posted up weeks ago.

Anna @PorridgeLady did front of house superbly for a first timer. It was an eye-opener for her in many ways. We discussed how it is seen as a profession in France. One has to assume a certain body language, upright and confident. You serve but must remain in control.

“You taught me that I have to focus on getting the dishes out when they are hot and not get waylaid by customers asking for, say, water. As the evening went on, I realised that I must make eye contact and keep my head up, be polite but firm”.

Unlike in a normal restaurant, there isn’t a team coordinating things, on this occasion just myself and Porridge lady. We discussed what makes a good team; one element is that while front of house must let the kitchen know if there are problems they should not stress the chef who has enough on their plate.
Paul A Young provided little packets of Marmite truffles for everyone. Calling me over, Paul was convinced that another guest was somebody famous. Peering over,  this guest did resemble Roman Abramovich, the owner of ‘Chelski’ football team who had just lost at Wembley, up the road. What a coup! I thought. He comes to my living room to drown his sorrows. I sidled up to this guest, but when a posh English accent came out from his mouth rather than a Russian accent, this fond fantasy fell away…
One thing did surprise me…after all those Marmite courses, several guests did in fact want the hot Marmite drink at the end rather than coffee…now that’s lovin’ it!
People did drink more water than usual. The weather or the salt?