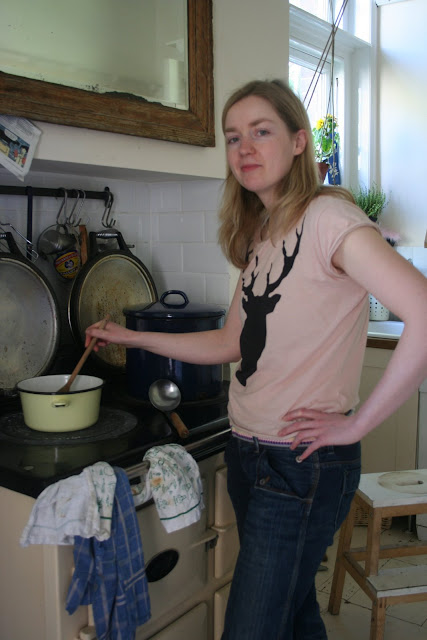 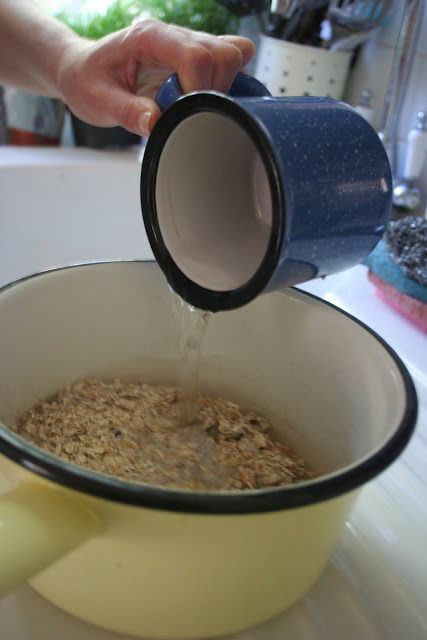 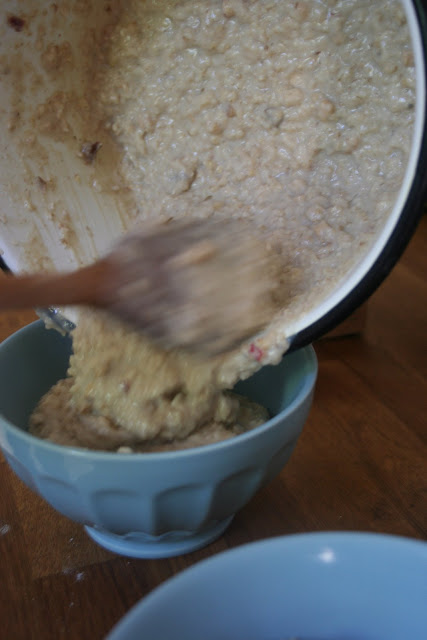 One of the best things about having Anna Porridgelady do ‘front of house’ for me is that, because she lives far away, she stayed the night and therefore, in the morning, she cooked us porridge. I felt privileged: Anna is a finalist in The World Porridge Making Championships, also known as The Golden Spurtle (a kind of porridge stirring stick).
She used the Rude Health oats ‘fruity date’ that I got for free at The Real Food festival. She considered the packet with an expert eye:

“Yeees, this is a mix of large and small oats, some rolled and some chopped”.

“What does that mean?”

I asked, sensing that I was about to get a wealth of insider porridge info.

“What is the secret of good porridge?” I delved.

“Keep stirring. People tend to wander off and leave it. Ooh I’ve never cooked porridge on an Aga before!” she exclaimed.

“How often do you eat porridge?”

“Every morning. When I was doing alot of running I used to eat a bowl in the afternoon as well. It’s particularly good with kippers and spinach, all those traditional Scottish recipes” she continued.

“In Japan they eat seaweed and oatmeal. Many cultures have porridges. In Russia Kasha porridge, buckwheat, is very popular, especially with mushrooms. Quinoa (pronounced [keenwa] is a kind of porridge.”

“In Thailand they have congee for breakfast, a rice porridge” I remember.

Anna Porridgelady has finished the porridge and dishes it into bowls.

“I like to put a little milk on top”

“I hate cleaning the pan afterwards” I complain.

“The trick is to give it a quick rinse as soon as possible so it doesn’t stick” Anna says, rinsing.

At The Golden Spurtle, a competition which has been running for 15 years, the top Scottish hotels send their chefs to compete. They all want that title.

“But it’s very tongue in cheek, humorous” says Anna”and it attracts the tourists”

Last year there were three competitors from England, one from Canada and the rest were from Scotland.

This Rude Health porridge is flavoured with cinnamon, apples, dates and apricots. It doesn’t need any sugar or, my childhood favourite, Golden syrup.

“Cinnamon is good for controlling blood sugar” explains Anna”They call it the diabetic sugar. Cinnamon is naturally sweet but has no hypoglycemic index”.

During the competition, Anna got quite nervous, almost hyperventilating at the start. The contestants get half an hour to make two types of porridge: one a speciality, the other using only the traditional Scottish method of water, salt and oats. It’s a version of Masterchef, but the only dish is porridge.
Anna spent months foraging in Berkshire for the ingredients in preparation for her speciality porridge; scrumping Bramley and Discovery apples for different purées, making crab apple jelly and rosehip sauce as a side syrup.

“The guy that won it, Ian, his porridge was stunning”enthused Anna.

“What was his speciality?” I asked

“He didn’t do one. He just did the traditional recipe.”.

“Er, how different can different porridges be?” I put the question.

“A winning porridge has colour, texture, flavour.”explained Anna. “The texture should be gloopy but rough at the same time. This one had a mix of colours, yellows and browns. He used salt as a flavouring. It didn’t taste salty. The salt merely enhanced the intrinsic taste of the oatmeal. Another woman did one from very fine oats which was more like a grey gravy. There are also pinhead oats which are really coarse, hardly refined at all, tasting nutty. One contestant made that version and barely got it finished in the half hour allotted.” 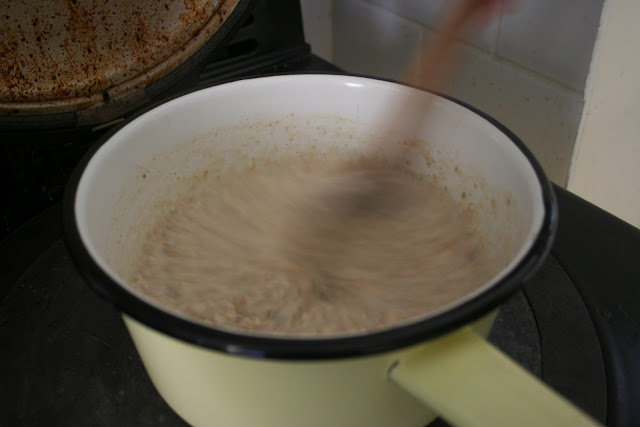 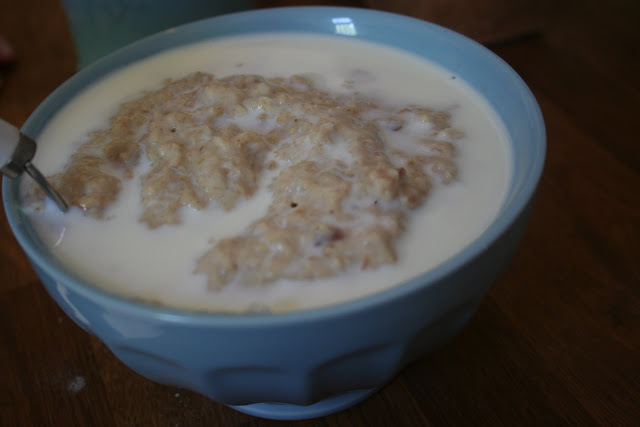 Previous Post: « The Guardian canteen
Next Post: Love it or hate it: Marmite at The Underground Restaurant »