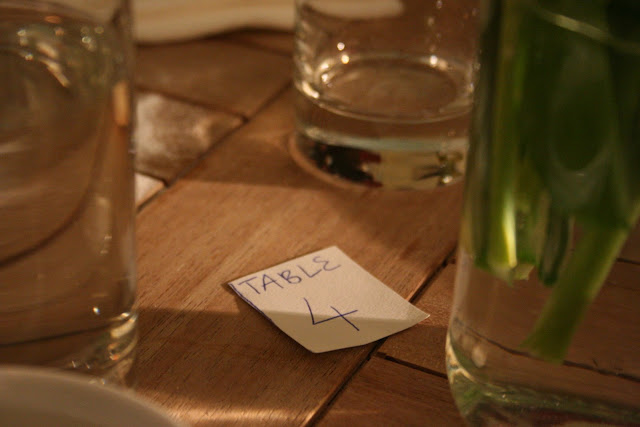 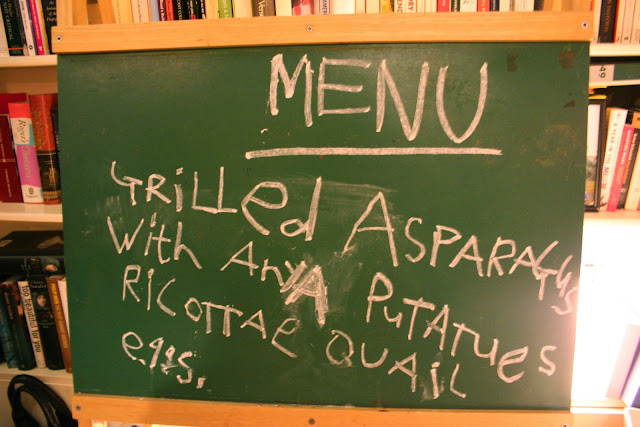 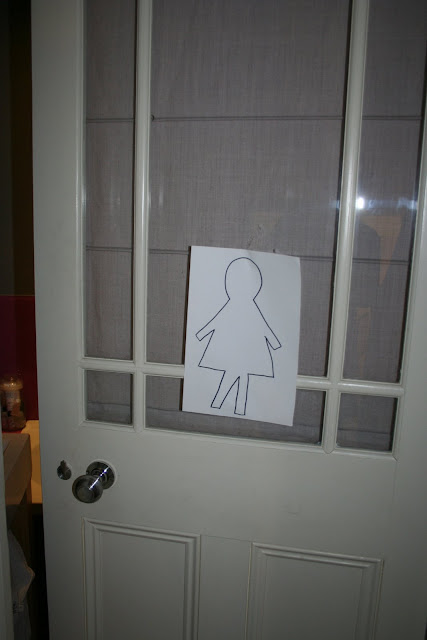 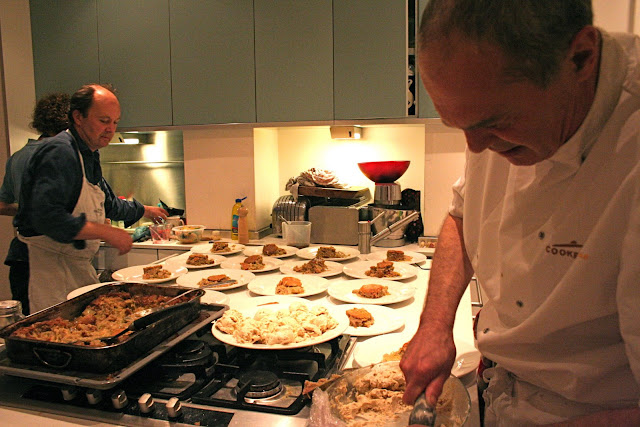 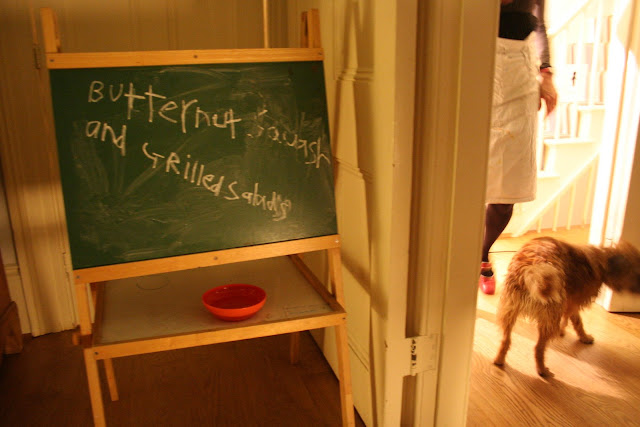 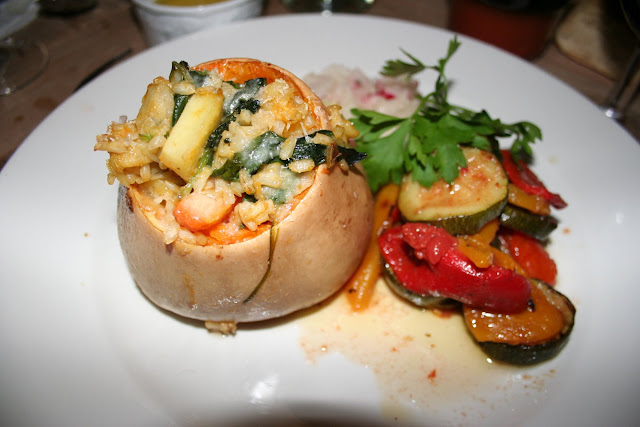 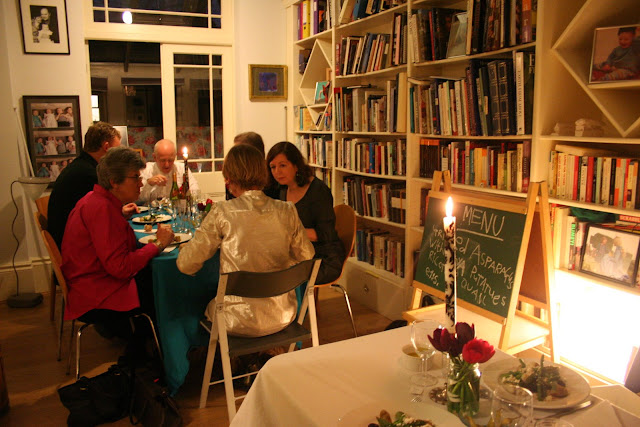 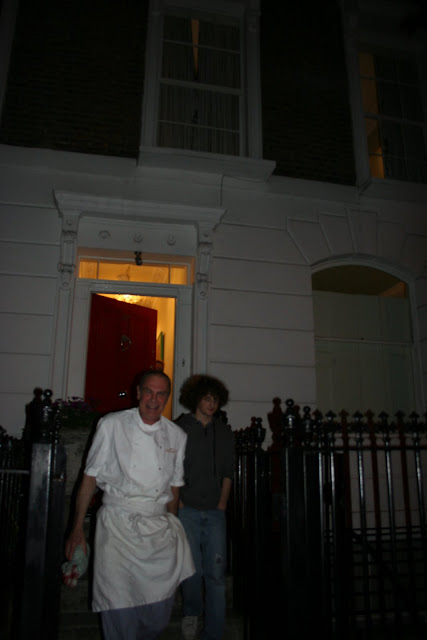 Sunday Times journalist Rosie Millard and Mr Millard came to eat at my place. A few weeks later she set up her own one night ‘pop up’ restaurant, based on my model, fixed menu, three courses for £25 (although in the end Rosie didn’t charge us as she was getting paid for the article she was writing about it). I drove to her gorgeous house in Islington, near where the Blairs used to live.

In a sense it was the first time I’d been to an underground restaurant, although I had met Rosie before. For the first time I too, was entering into the unknown. I was keen to see her house in much the same way that I expect people are curious about mine, excited to see what food I would get, what guests I would meet.
Rosie hired a friend, David, to chef that night and a young man with unruly ringlets, straight out of a Caravaggio painting, to wash up.
David used to own Bar Ganza in Inverness Street, Camden, one of the UK’s first Spanish ‘tapas’ restaurants. I used to go there all the time.
The menu was charmingly chalked in best handwriting on an easel blackboard by Rosie’s daughter, who also waitressed.
The only awkward moment was that I was greeted with shock when I arrived. Although I had emailed to say I would be coming, for some reason I was not expected. Rosie recovered her composure quickly and found me a seat next to a lesbian couple who were some kind of ‘Super-teachers’. If anyone could get your kid through their exams, they could. One of them taught maths and was booked up for months ahead. She wouldn’t tell me her hourly rate but I got the feeling it was high.
An older lady came and handed me her card. She was a ‘restaurant consultant’; this is someone who helps you run your restaurant better. She’d spent years running a large successful restaurant in Liverpool.
On an adjacent table there was an elegant willowy publishing agent. And on another Johnny Maitland, who came to film my Underground Restaurant a week or so later. He seemed caught between two stools, on the one hand wanting to sneer, calling the whole thing a M.U.P. (apparently a TV term for ‘a made-up phenomenon’) and on the other actually quite interested (“It’s a great story isn’t it?”). He reminded me of my brother, all exaggerated cynicism and swagger.
In fact when newspapers take the piss out of Islington dinner parties, I think they are referring to precisely this; a roomful of interesting, educated, media career types with liberal politics and lifestyles who are nonetheless exquisitely middle-class. For a Sunday Times journalist, it was very much ‘Guardian reader’ territory.
The food was delicious and nicely presented, as one would expect from the ex-chef/patron of Bar Ganza, although a little under-salted for my liking. Despite knowing how irritating it is to a chef to ask for salt, I did.
I popped downstairs to the basement where the kitchen was located. I looked enviously at the wide island in the middle, perfect for plating up.
The toilets had little drawings on the doors, male and female, obviously done by Rosie’s children. I think she’s got about five or six. How she finds the energy to bring them up, write articles and run marathons is beyond me. The house had a nice vibe, kids, dogs, books.
By elevenish we had all left. Rosie stood in her hallway politely bidding us goodbye but underneath looking a bit tired of the whole thing. She said she was going to write up the piece that same night.
It’s easy to underestimate the effort involved in holding a pop-up dinner. It takes me four days generally. Two days prep, one day shopping and one day clearing up, washing and ironing tablecloths. I generally do about five dishwasher loads after a typical Saturday. It’s not for the faint hearted.
A few days later the piece came out in The Sunday Times. My nom de plume was misspelt and the link to my site was broken, despite several requests from me to the online editor to fix the link. I did get some customers from it, the ones who used imagination and detective skills to find my blog. I was later told that The Times have sacked all of their subs.
The very thing journalists complain about bloggers, namely that without subs there are mistakes and furthermore no direct reporting (see my post on Nick Davies ‘Flat Earth News’) is actually what newspapers, slashing at staff and budgets, are suffering. Being on the receiving end of the press the last few months has been very encouraging: bloggers are enthusiasts, amateurs in the very best sense of the word, omitting the weary cynicism of the professional journalist.