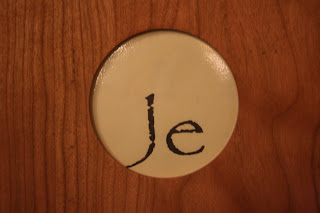 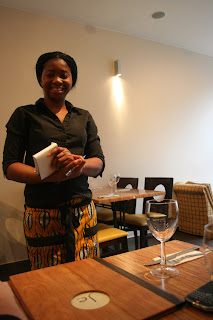 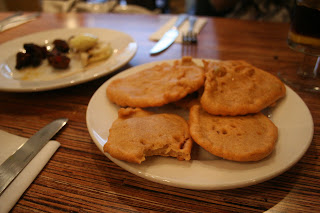 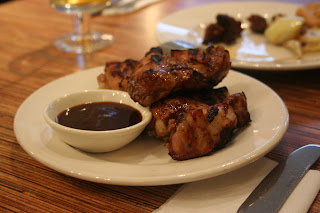 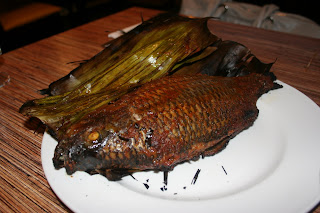 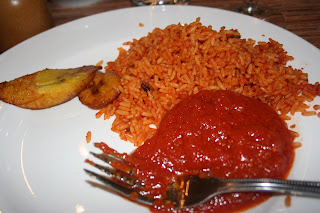 Opposite The Luminaire in Kilburn, I’ve walked past Je-African Grill a million times. The word ‘grill’ slightly put me off, as clearly meat is going to feature strongly. But still, I was intrigued, what’s an African restaurant in Kilburn like?

The interior is simply decorated, beige and white with a chaise longue in the window and a low table upon which rests a typical African game...Bao or Mancala. (My daughter and I got quite obsessed with this game when we were travelling the Southern part of Africa.)
I went with meat eaters; @tastingsessions, two dynamic blonde Australian women. Together we are planning a vintage gin tasting at The Underground Restaurant at the end of August.
They ordered chicken wings and goat cubes. Nicely blackened, the carnivores seemed to enjoy them. Hayley and Angella create tasting events with a difference, held in unusual locations. They claimed to be subdued on this occasion as they were taking a much needed break from drinking. Could have fooled me.
I tried the bean pancakes(‘moi moi’)which looked like cookies but were a kind of fritter. They were not bad but needed something more, a dipping sauce? to make them less bland.
Mains were dominated by a large grilled fish in tamarind, wrapped in banana leaf. It was well cooked but one couldn’t taste the tamarind or coconut.
We had this with a side of perfectly fried plaintain slices.
I have never tried Joloff rice , a speciality of West Africa, meaning ‘one pot’. It was spicy and tomatoey. I would go again just for this dish. I accompanied it by the simply named ‘stew’. It turned out to be a tomato sauce, again spicy and intense in flavour.
The waitress was a lovely giggly Nigerian girl in a traditional African skirt. My only complaint was that the African music, while fantastic, was so ear-hurtingly loud we had to ask for it to be lowered twice.
Clearly ‘Je‘ is mainly geared towards meat eaters and so I didn’t get to taste it’s speciality dishes. But there are a few of things that vegetarians can enjoy.
The meal was good value, around £15 per head with a glass of wine.
Je-African grill
304 Kilburn High Road, London. NW6 2DB
020 7372 8884
http://www.jerestaurant.co.uk