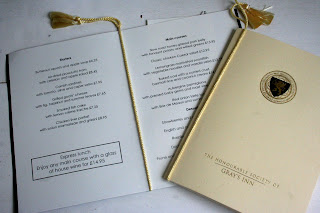 Serving a menu or a writ? 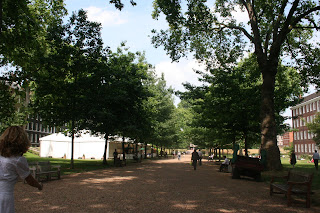 The gardens with the marquee of the restaurant on the left. 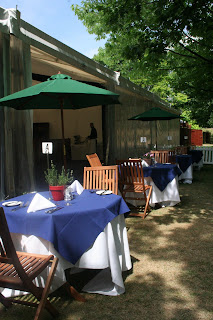 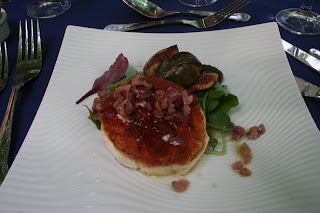 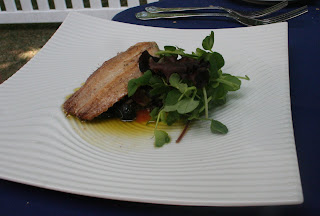 Grilled sardine. I seem to have forgotten to take pix of the mains. Probably a bit drunk. 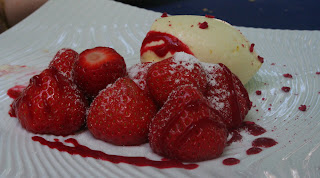 Strawberries with a quenelle of fresh cream. The perfect summer’s day dessert. 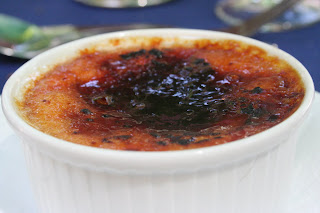 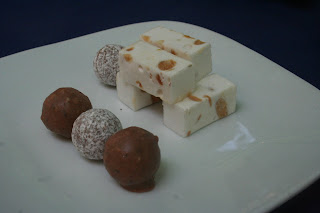 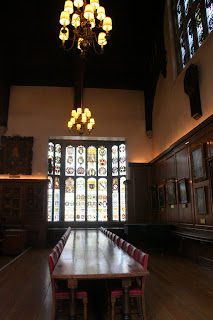 Long tables like this are the source of phrases like ‘treading the boards’. In the old days, tables or boards like this were put together to make a stage. 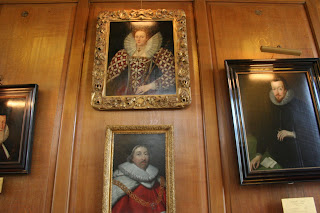 The lady patron of the Inn-Elizabeth I 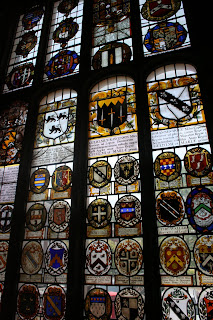 The stained glass windows, which were removed during World War II, fortunately, as the whole building was bombed. 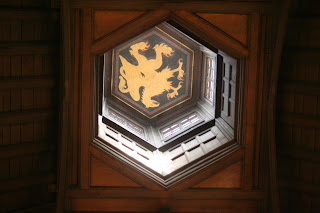 The griffin, adding to the Harry Potter air of the dining rooms, the house of Gryffindor. 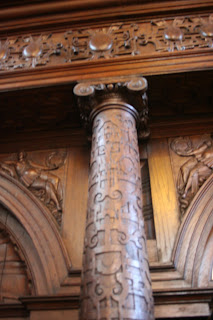 Part of the hall, these wooden pillars were filched from the Spanish Armada during Elizabethan Times. 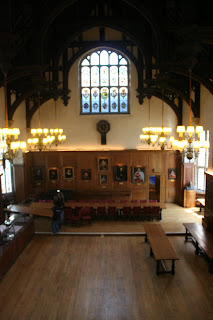 The hall. Benchers are allowed to come through that door at the back. Nobody else. 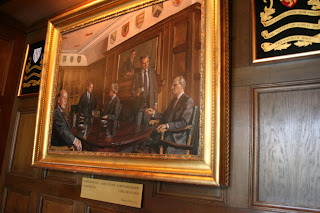 A modern painting, every one of these men a Lord. 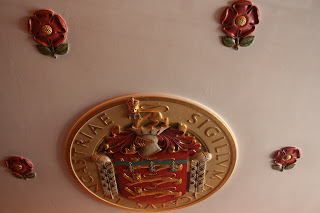 The red rose and crest of Lancaster adorning the ceiling. 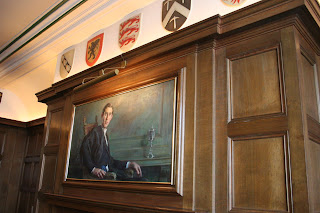 Prince Charles is an honorary ‘bencher’. 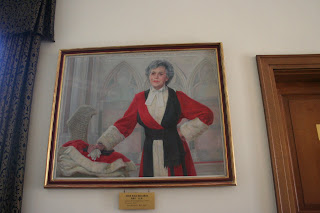 A lady treasurer. This position changes annually. This painting reflects the era, the 1980s. 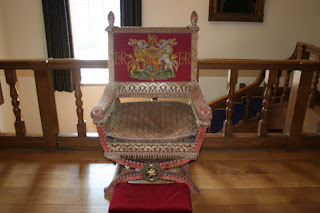 The Queen’s chair, reupholstered upon her coronation. The last chair, upholstered for her uncle, was never used by him as he reigned for such a short time.
There is a difference between pop up restaurants and home restaurants. (Press/TV take note). Pop up restaurants, meaning simply that the site is impermanent, have been sprouting up for years and are not necessarily illegal.
The Honorable Society of Gray’s Inn Banqueting is more legal than most, the majority of guests being barristers. For six weeks every summer, for the last decade, this restaurant renamed The Griffin, relocates outside when it opens to the public. The gardens, originally designed by Sir Francis Bacon, are a hidden and pollution-free haven behind the office blocks of Holborn. Local workers in the know, wend their way through the secret passageway (very Diagon Alley and the Harry Potter links don’t stop there), past the squares of law offices into the refreshing green lawns of Grays Inn.
The menus for this restaurant resemble legal documents, all Wimbledon green embossed covers and gold tassels. The prices are reasonable, especially considering the setting; £18.95 for two courses, £22.95 for three. And the food, as can be seen by the pictures, is extremely good.
Waiters are attentive, they have to be, normally they are performing silver service for ‘barrister’s dinners’, to Queens counsel, often peers of the realm. To become a barrister in the UK, after passing your exams, you have to attend, wearing a gown, 12 formal dinners (link to an account of this).
In the old days, all the surrounding buildings were lived in by students of the bar and every meal was eaten in the hall. Students were not allowed to eat in their rooms and female guests were banned, unless they were over 40 (good rule that!).
Nowadays Judges use some of the accommodation as pieds à terre in town. The Grays Inn restaurant does every so often get a judge in his dotage, having had a little too much to drink, having difficulty in making his way home, despite it’s nearness, because the housing looks alike.
The Griffin open from the 27th of June to the 23rd of July.
The Honourable Society of Gray’s Inn
8 South Square
London
WC1R 5ETTelephone: 020 7458 7960 / 7968
Email: banqueting.functions@graysinn.org.uk