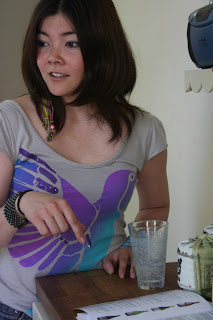 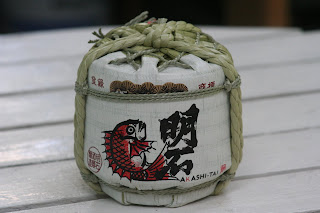 Wedding sake
This Saturday The Underground Restaurant is presenting a Japanese menu in conjunction with Tsuru, a Japanese restaurant near the Tate Modern.
Emma, one of the owners of Tsuru and I are still working on the menu but it’s looking like this:
UNDERGROUND RESTAURANT JAPANESE MENUSake from Akashi-Tai Edaname (with and without shichimi pepper) Ippin Ryouri (Japanese tapas) Tempura Set (Asparagus, Avocado, carrot, sweet potato, peppers, Mars bars) (jokes) Aubergine, red onion and mushroom skewered katsu Cucumber and Wakame Salad French Beans with Sesame Dressing Salmon Sashimi with Ponzu Sauce Maki Sushi Salmon and Cucumber/Japanese Pickles (v) Inari Sushi Sweetened tofu parcels with rice — Green Tea Ice Cream Dorayaki (Japanese pancakes with custard or adzuki bean filling)All of this is subject to dishes getting a bit fucked up, mistakes, errors, seasonality, pure whims and changes of mind/wind of course.Wakana, the ‘face’ of Akashi-Tai sake, popped over this morning. She brought some beautifully straw packaged Akashi-Tai Honjozo bottles of sake.

“These are usually used for weddings” she explained “They are served chilled.”

There will be one for each table. Smaller tables will have to share with bigger tables. There is also ‘Umeshu’ a sweet plum infused wine that tastes a bit like prunes in Armagnac (but less sickly). Proper sake, made in Japan, uses the best water and rice. It has no artificial elements, hence no hang-over. Cheap sakes made in California or China compromise on rice quality and water. One of Akashi-Tai’s sakes is made with rice that is polished down to 40% of the original grain. This means that only the starch is used, making it sweeter. I discussed with Wakana food blogger Bellaphon’s assertion that Japanese rice does not taste as good in the UK because of our hard water. She agreed saying that some rice in Japan is so good you can just eat a bowl of it plain, with nothing on it. Water in Japan is soft but for Sake purposes, hard water must be used, which is only found in a couple of areas of Japan.Wakana comes from the Okinawa islands. Her family own an old shrine and every month shamens come to pray. Their religion, Ryukyuan, is pre-Buddhist, the equivalent of our pagan religion. I am going to set up a little altar, comprised of a dish of rice, a bowl of sake and some herbs, placed in the Western corner, to placate the kitchen or hearth gods, Hinukan. 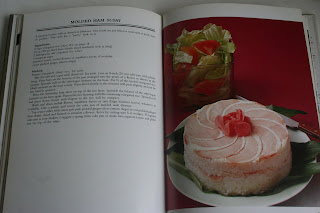 Together we looked at an old imported Japanese cookery book that I have, that I bought for a huge amount of money at the 1991 Japanese festival at the Victoria & Albert Museum. Some of the recipes are clearly meant to appeal to Westerners, for instance the ‘spam’ sushi. I first got interested in Japanese food when I saw the 1985 film ‘Tampopo’. I have never been to Japan however. It’s on my to do list.