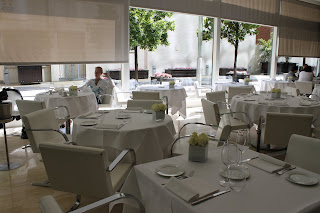 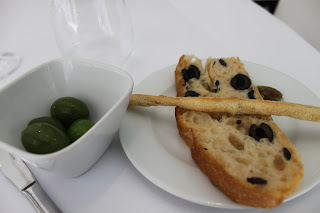 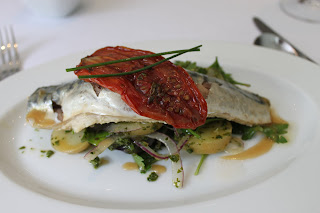 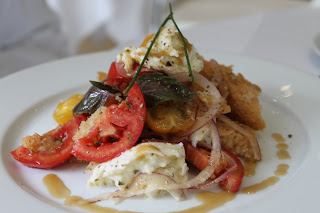 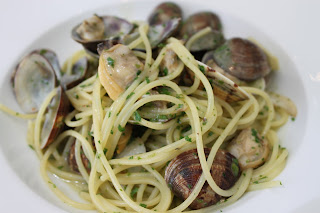 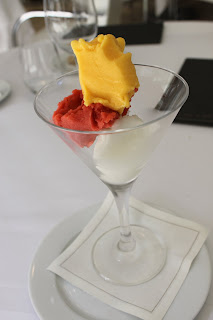 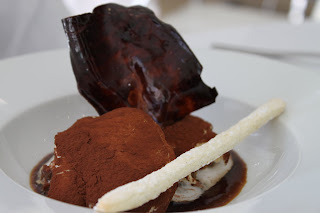 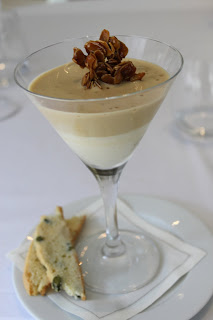 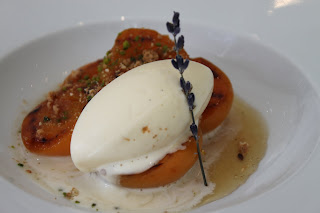 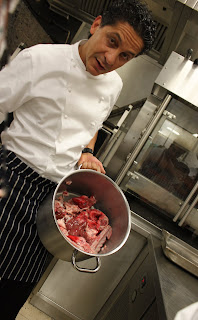 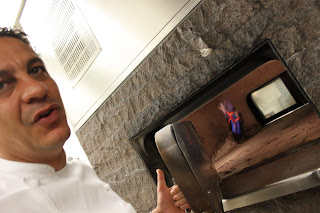 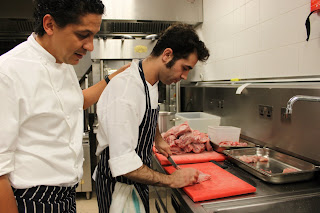 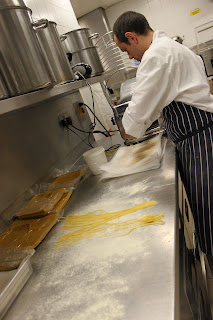 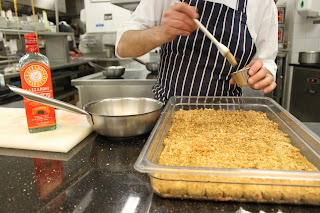 Amaretto on the Tiramisu To celebrate the anniversary of the French revolution I went to an Italian restaurant; L’Anima run by chef Francesco Mazzei is set in a glossy location near to Liverpool St. As you enter you are struck by the cool and classy colour scheme, very Armani; taupe walls, pristine white linen tablecloths, cream roses, white leather and chrome chairs. The waiting staff wear crisp white shirts with yellow ties. The room buzzes with efficiency, both from the waiters and the clients. The table settings are plain and fine…white porcelain round plates. You can see the kitchen through a series of small windows.

Francesco came over to chat; even after service his chef’s whites were precisely that; dazzling against his smouldering Sicilian good looks. So unlike your own dear MsMarmitelover who, a couple of hours into service at The Underground Restaurant is perspiring the welcome cocktail and staggering about in a smeared apron.
To book, I sent the restaurant a cheeky email:

Hi,
I’d like to book lunch for two next Tuesday 14th of July (eat Italian not French eh) at 1pm. Is spag vong on the menu by any chance? I’ve heard Francesco Mazzei’s version might almost be as good as mine. I’m bringing an Italian food freak so I hope you guys are up to scratch…
love
MsMarmitelover
x

Imagine my surprise, pleasure and slight embarrassment when the man himself graciously replied:

Not sure about the vongole be better then yours but I will be there!

Look forward to meet you.

I took Marghe, an Italian friend who has helped out at The Underground Restaurant. Prices can be very reasonable at L’Anima: for lunch two courses are 22 quid, and three are £26.
The menu did not have Spaghetti Vongole. The waiter said:

Marghe and I looked at each other

We started with a selection of breads, some plump green olives from Puglia (bella di cerignola), and a dish of grassy pungent olive oil. The breads included proper sourdough (Francesco got his 300 year old starter from Francomanca), olive focaccia and fennel grissini (unusual).
We ordered a carafe of house white at £12, fruity and light, perfect for a hot July day in the City.
Starters: good mozzarella and tomatoes (from England!) with friselle, torn bread soaked in tomato juice for Marghe, and mackerel on a bed of blue and white potatoes and parsley for me. Afterwards Francesco asked me what I thought. I really appreciated his brave desire for honest feedback. I said that I didn’t like the skin being on the mackerel but I’m just a bit fussy like that. He noted this with a seriousness I didn’t expect.
Mains: spaghetti vongole. The juicy tender palourdes were imported from France and the sauce was garlicky and oily with parsley. Excellent. But the pasta was al dente. Very al dente.

“Perfect” pronounced Marghe “this is how I like it”.

I like a little bite in the middle but for me it was too al dente.

Francesco explained: “when I saw your friend was Italian I thought I’d cook it as the Italians like it.”

However pasta continues to cook even on the plate (many people don’t realise this) and towards the end it was perfect even for this Englishwoman (whose great grandparents were Italian).

Marghe added later that people from the south of Italy prefer their pasta quite hard.
But another thing that was very Italian about it was that the amount of pasta was quite sparse by MsPiggyMarmite’s standards. Now I know the Italians eat pasta as a starter. I know that 100-150 grams is the usual portion. But I don’t eat meat. So I like lots of pasta, 250-300g, at that point we are starting to fill a corner. (Don’t worry I won’t have enough room for dessert. As my mother said, humans have a separate ‘pudding stomach’ for that.)
Francesco uses De Cecco, Cocco, Martelli (Bronze-die) and Spataro pasta. He explains that “each batch is different”. Freshness counts even with dried pasta. Barilla, which I like, he would never use for the restaurant. Bronze-die pasta, which roughens the surface so that the sauce sticks, was recently introduced into British supermarkets but hasn’t really taken off.
Despite being offered some palate cleansers of soft sorbet, mango, strawberry and divine lemon, we were still greedy enough to order pudding.
I chose a liquorice zabayon, yer classic zabaglione, perfectly done, with icecream in the middle, (conceptually a liquid Artic roll ?). I love liquorice and really it’s not used enough in cooking. It was accompanied by the lightest biscotti containing almonds and pistachios.

“The secret is to use 00 flour “ said Francesco.

Marghe ordered Cappuccino Tiramisu. I don’t like Tiramisu but I liked this. Crowned with a tuile of hard caramel and a slim baton of savoyarde biscuit, it wasn’t too alcoholic, and was light in texture.
We were given, gratis, a dish of wood-oven baked apricots with amaretto icecream. Now this is the sort of thing I would never normally order. It’s far too grown up a dessert for me and basically I think fruit is boring. But it was stunningly good…burnt orange apricots dotted with leaf green pistachios in a pool of moreish (or Moorish?) syrup.
Francesco sat down with us at the end: we asked if we could marry him (me as Wife Number One of course). Unfortunately he’s already married.

“Is your wife Italian?” I asked.

“No. She’s Sicilian” he zipped back.

We were taken on a tour of the kitchens, which I always love. Everything is used in the kitchen, meat and fish scraps make stock, watercress stalks go in the compost, nothing is wasted. We got to taste some of the other flavours of gelato; watermelon sorbet and my favourite, yoghurt icecream. Francesco started working in his aunt’s gelateria when he was 14. Nobody on the planet makes icecream like the Italians. A little birdy told me, Francesco may even open his own gelateria in London….can’t wait!
L’Anima,
1 Snowden Street
Broadgate West
London, EC2A 2DQ
0207 422 7000