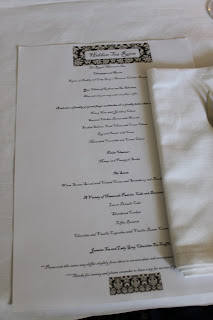 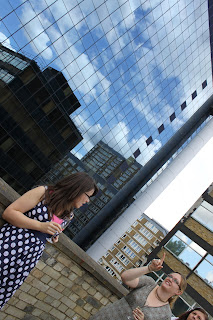 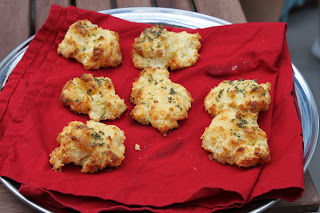 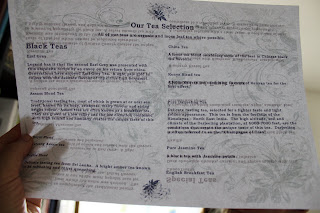 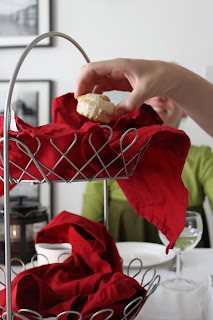 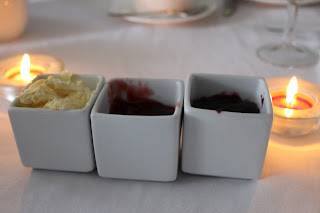 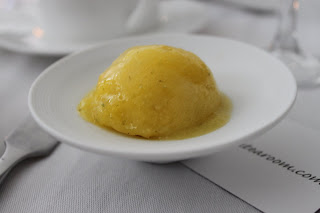 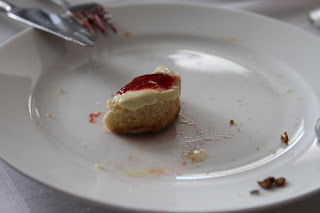 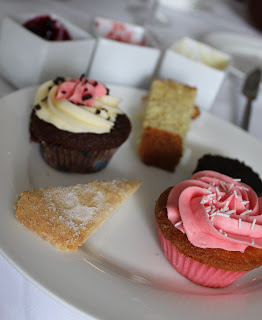 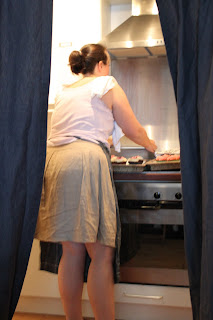 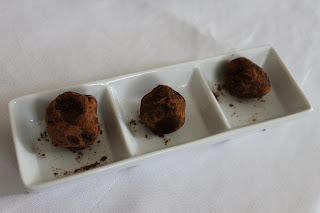 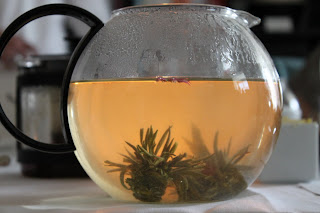 This Sunday I was invited to two teas…the first The Hidden Tea Room by Lady Gray (which is the tea ‘consort’ of Earl Grey geddit?) which was a ‘proof of concept’ (a business term for a try out) which will be open to the public. The second by Angie who has helped me cook on a couple of occasions at The Underground Restaurant, which, though she asked for a contribution, was open only to friends.

The Hidden Tea was held in a large converted building near to Old Street. I saw this building being done up a while ago and was always curious what it was like inside. It has tiny maze-like passages (hard to find a sofa that will fit) and grand staircases. The staircases and halls are larger than the flats!
Lady Gray and her husband have opened their living room and terrace to the public. Her particular passion is baking. I was asked along to give constructive criticism and hints on her new venture. I’ve turned into an Underground Restaurant consultant! (I also gave advice this weekend to another lovely couple who are about to start a restaurant in their shed. I’ve sat people in my shed, have quite a serious shed fetish actually so am looking forward to this one. Expect a report soon…)
We started with a glass of champagne and some cheddar bay ‘biscuits’. These were ‘biscuits’ in the American vernacular (they seem to call all kinds of things biscuits over there), were in fact more like little cheesy muffins. They were light and delicious.
Then six of us sat down at a table covered with white linen and plain white porcelain china. This sober display along with Lady Gray’s husband’s black and white photographs reflected the urban city sleek surroundings. The kitchen was an alcove off the living room. At first there was a gray curtain hiding the chef’s movements from the diners.
My advice to Lady Gray is to remove the curtain and allow us to see her cook. This does take a little getting used to but I emphasised

“if people want a perfect seamless experience then they can go to a normal restaurant. Part of the charm of the home restaurant is the transparency, the fact that you can interract with the chef”.

One of the challenges of being a home restauranteur is that you are both chef and front of house. It’s hard to be in two places at once. As people are in your home, your intimate space, they want to meet you! My kitchen at The Underground Restaurant is separate from the living room. I tell diners that they are more than welcome to visit the kitchen after the main course has gone out. A kitchen where diners can see you is an advantage, so use it. If you are shy, well, frankly get over it (shyness is unacceptable in anyone over 25 in my opinion anyway). A home chef cannot be a shrinking violet.

We perused the beautifully designed menu and tea menu. There was a huge choice of teas from builders, Lapsang Suchong, fruit teas and unusually, a chocolate truffle tea.
We started with finger sandwiches. These were handed out silver service style by Lady Gray’s hubbie. There were a couple of problems with this: it was slow, the sandwich selection for non-meat eaters was scanty and finally again it removed one of the best things about home restaurants…family style eating. My advice was to put all of the sandwiches on a huge platter in the middle, marked with labels. Sharing food family style encourages bonding between diners who may be total strangers. I find that it’s best just to let my diners get on with it, I don’t hover.
Next we were served a pyramid of fruit and plain scones, still warm from the oven. They were light fudgy and delicious. Lady Gray is a supremely talented baker. They were served with clotted cream and a couple of jams.
A selection of cakes…cup cakes with fantastic butter cream icing, lemon drizzle cake, tiny chocolate brownies, shortbread, all of them light as air. There ensued a debate on fairy cakes v cupcakes. I do feel that the demise of fairy cakes is analogous to the gray squirrel pushing out the native red squirrel. Cupcakes are a larger Americanised form of fairy cake. However Lady Gray is an American so we were getting the genuine article.
We finished with home-made chocolate truffles, plain and Earl Grey flavoured, and some delicate flower tea.
It’s a brilliant idea to have a trial run before going for it and I was glad to have shared some of my ‘growing up in public’ experiences over the last six very intense months, the highs and the lows, the mistakes and the triumphs, with Lady Gray. Information here for future teas…
We then drove over to Hackney Wick to catch the last part of Angie’s ‘Fantasy pop up tea’. This was an all female affair, cooked by four women and all girl guests. Fat Les was with me and he perched nervously on the peripheries. Teas do seem to be predominately female or gay. Is tea gay? Fat Les loves a cake, isn’t gay but the poor man feels left out. Is there such a thing as a butch tea? 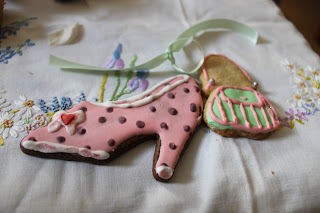 As you can see by the photos, Angie and Co. had a lot of fun styling the biscuits and cakes. The sitting room was quirky, vintage and shabby chic in style. I missed the savouries but the menu looked great. This tea was not open to the public but seeing two teas in one day ( I probably now need testing for diabetes) was fascinating in terms of difference of style. 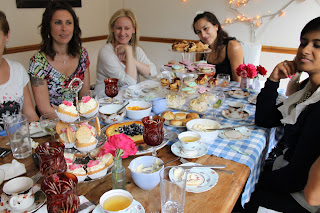 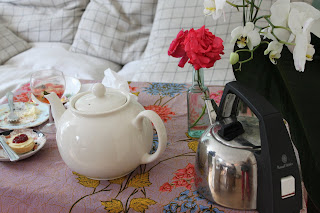 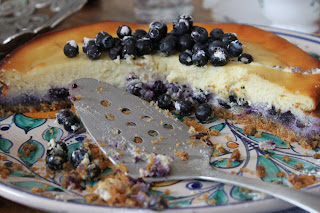 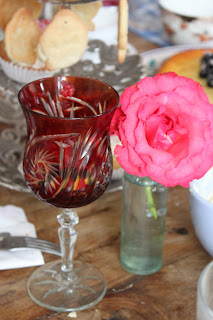 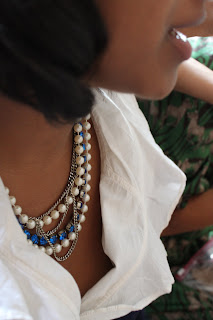 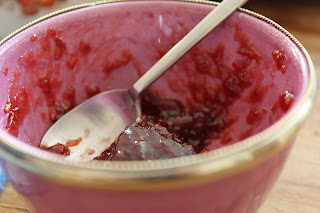 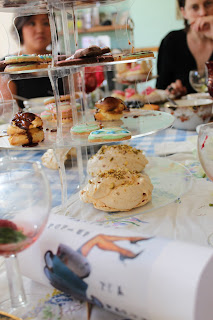 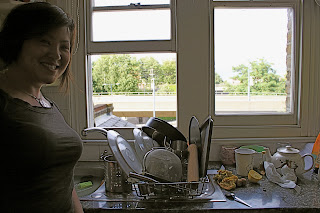 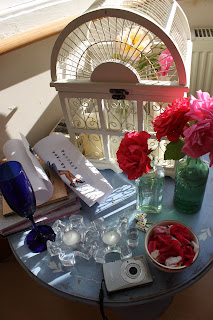 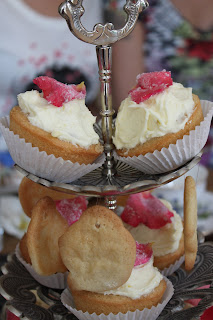 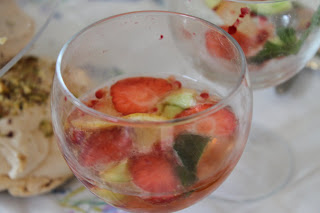 Underground Restauranteurs (1) are not in competition. Everybody’s cooking style is different. Everybody’s house/china/toiletries/music taste is different. As I’ve said before, I want to visit them all…council flats, boats, sheds, chateaux, suburban semis, warehouses, modern flats, period homes….
(1)I know the proper term is restaurateur but fuck it, I think that just sounds weird. Of course the original term ‘restaurant’ was a noun for a restorative bouillon or soup for those who were poorly. So ‘restaurateur’ means that you are ‘restoring’ people to health.