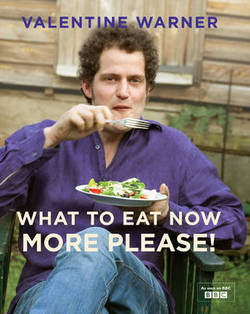 I met Valentine Warner at a dinner organised by The Moveable Restaurant. Fifty of the poshest people you will ever meet sat in the same room.(Oh I have a whole shtick about class/money and food in this country but that’s for another post.) Not surprising I guess, as the chefs normally cook for The River Café, one of the most celebrated restaurants in London.

Sat on long mixed tables, I noticed he had his back to me slightly. His girlfriend opposite was incredibly friendly, but Valentine was wary in his body language. Probably gets pestered all the time and was thinking ‘I’ve come here to have a nice lunch not to get bothered by randoms’. But I rarely watch TV so I had no idea who he was. Eventually we got chatting and I asked stupidly

He mumbled something about food and the BBC. A few weeks later I was surfing the net and his picture came up. Wow, I thought, he wasn’t kidding about TV.
His book ‘What to eat now more please‘ accompanies the forthcoming BBC series. It’s pretty good. I agree with his food.
The recipes work well; I tried the stuffed deep fried courgette flower recipe.
The pictures are clear and appetising. I like the fact that every recipe has a photo. It’s so hard to make a dish when you don’t know how it’s supposed to look. There is also a handy ribbon bookmark to mark your page.
This cookbook has personality which is actually rather rare. Most recipe books are merely instruction manuals with maybe a bit of blurb about how their arrière-grandmère made this dish or something… a bit of foreign exotic (we only trust a cook if they have travelled, lived abroad or have non-English roots), a smattering of family history, but very little humour.
Sometimes the humour peeks through here…Valentine describes Lavender cream meringues as ‘fairy tits’ and I slightly wish the publishers would let him off the leash to explore that a little further.
Warner rightly has strong feelings about chips; actually he prefers ‘fries’, pencil-slim and crispy, giving a recipe. I recently started a whole debate on Twitter about #chips. I don’t think I’ve ever had so many @replies. It’s a subject, like religion or politics, which can lead to fights. The best ‘fries’ I have ever had were at a 1980s restaurant called the ‘Camden Brasserie’, sadly no longer with us. Their French fries were long, thin, very crispy, fresh and served in a basket. My family used to go there just for that dish. When a restaurant gets one thing so right, you keep returning.
The recipes in What to eat now more please are ones I either already make or would like to make and it’s nice to have them in book form, beautifully photographed. I particularly love the charming picture of a cat sniffing ‘Strawberry Cream fancies’ (and I’m not a cat person) and the ‘Blackcurrant Cream’ blancmange. Nobody eats blancmange, (1) popular in the middle ages, anymore…
My only complaint about the book is that he is far better looking in real life than the photo they chose for the cover.
(1)A few years ago I lived as a Tudor for several weeks in Suffolk. I smelt Tudor, wore Tudor clothes and spoke Tudor. The toughest part was to bow and scrape to the ‘aristos’ and forgo the word ‘OK’. We also ate Tudor, which meant all old world foods nothing New World; no tomatoes, potatoes, pasta, chocolate, tobacco. Us ‘peasantry’ subsisted on wurts (turnips) while the gentry got to eat meat, salads with flowers, marchepain and blancmange.