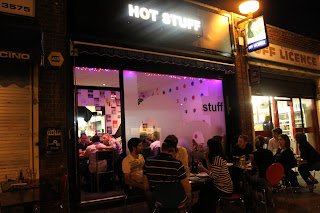 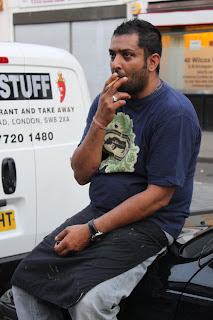 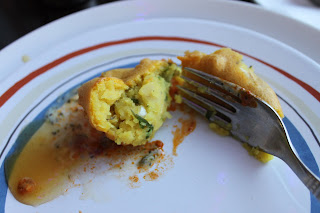 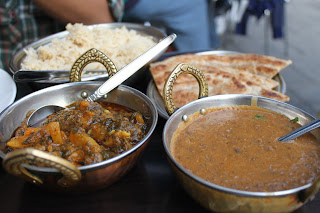 Arriving to eat with Rejina otherwise known as @Gastrogeek1, we were sat in the corner next to a large plate glass window. The evening was sweltering, one of these heavy August days that we seem to be experiencing of late, more reminiscent of monsoon than summer.
There was no air and no room. Hot Stuff is the kind of neighbourhood restaurant we all want, popular, tasty and cheap. But on a night like this, as the smog-hazed sun dipped to orange, and sweat rivulets vanished into one’s cleavage, it was unbearable. We ordered a couple of cool and sour cumin lassis but it did not help. My dress soaked through with sweat, my bottom was skidding around on the plastic seat.

“This is suffocating” I said to the waiter “please can we eat outside?”

He looked, there was no room. Temperatures rose, breath shortened, finally I got up and said to Rejina,

“seriously I’d rather sit and eat on the pavement. I can’t stand it” escaping outside.

Fortunately a couple outside were just about to leave. Clutching a couple of cold beers bought at the supermarket opposite, we sat, finally relaxing.
Suddenly the chef tumbled out of the door as did some other guests, red-faced, fanning themselves, clearly overheating.

“The fan’s blown a fuse!“shouted the owner Raj.

The chef sat on the bonnet of a car, smoking, trying to summon up courage to re-enter the furnace of a kitchen.

As locals walked by, they tapped his hand, clapped his shoulder, yelled hi from across the road. Everybody knew him. Hot Stuff has been there 25 years, with his mum behind the stove at the beginning.

“We were going ten years before Time Out did a review. Then it exploded. Everyone came. The F word are coming down soon.”

Food started to emerge from the kitchen, delicate apricot hued potato bhajis, soft and spicy in the centre, crispy on the outside, with mango chutney.
Then a plate of paratha, flaky and oily, a dish of aloo and aubergine, slick and fresh, a bean curry, like an Indian take on refried beans, a tangy squash curry, real pilao rice…

“But it’s not acid yellow, red and green?”

“This is the real pilao rice” stated Raj.

It was buttery and fluffy.
I ordered some raitha, which had mint, tomatoes and cucumber, just what you need on a summer’s day.
We talked about blogging, twitter and the iphone. Raj handed me his iphone to set up a Twitter account but was called into the kitchen. While I was attempting this, it rang, I answered.

“Yo!” a moody voice called, completely unfazed by the fact that a strange woman was answering “I want chicken”

“It’s Senz. I’ll be there in five minutes for my chicken”

This is the most casual takeaway service in the world. Raj, returning, nodded, shouted into the interior, “chicken for Senz”. Again he knew everybody, all his customers, by name.

“In Kenya, where I come from, people just drive up in their cars, grab their dinner and eat it in their car”

“What are your hours here?” I ask

“Six days a week. Dinner is two sittings, seven and nine. It’s hard work you know. Only Sunday off. That’s why the wife left. No time for her” he confesses.

“What’s the most important quality you need to run a restaurant?” I probe

“To be here. To turn up!” laughs Raj “No, mostly you just need to like people”