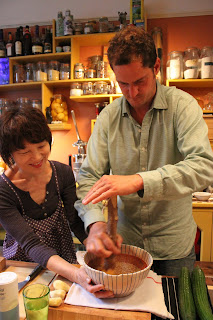 Harumi showing Valentine Warner how to pound sesame seed Japanese style.
We often think of Japanese cooking as complex, alien and difficult. A book ‘Everyday Harumi’ by Japan’s most popular TV chef and cookbook writer Harumi Kurihara, seeks to change that perception.
A lucky few were invited to watch her prepare some of the dishes, easy pickles, fishcakes and sesame beans, in an exquisite Georgian house in Clerkenwell. This cooking school in a home ‘Foodat52′ is a similar concept to home restaurants. The kitchen boasts a nine burner Victorian range cooker, an authentic Fridgidaire, burnished copper pans and beautifully constructed wooden shelving and plate racks made by owner and cabinet maker John Benbow.
Valentine Warner was also in attendance, bending down from a great height to respectfully listen to Harumi’s instructions.
Harumi is a tiny neat woman with a sweet and precise manner. Untrained, her style is ultimately pragmatic. Her food is obviously healthy, she looks at least ten years younger than 63. Overseeing a Martha Stewart style empire in Japan, she designs cookware such as a Japanese version of a pestle and mortar ‘Tsuribachi‘. This has grooves inside, enabling you to gently crack the raw sesame seeds in a circular movement, finally ending in a soft buttery paste quite distinct from Tahini.
The paste, which can also be bought ready made from Japanese shops, is used in soups and dressings. Mixed with Mirin sauce and sugar, it is also good with green beans.
Harumi is flexible though…

“Don’t stick to what I say. In my house, this is the flavour I create. You can express yourself however”

We watch her mix the beans and paste together. “Don’t overdry the beans ” she advises. She speaks in a mixture of Japanese and English. We learn some Japanese words: ‘scochi‘ ‘a little’…‘Oishi’ means delicious.
Presentation is very important in Japanese cuisine: Harumi suggests for instance that we put only one thing on a plate or put only a small amount.
Cutting is also an art: the translator explains that she and Harumi spend much time trying to find English synonyms for all the different Japanese words for cutting.
Harumi makes cucumber pickles by rolling them hard, skins on, in salt; this brings up the colour and gets rid of bitterness. I’ve often salted thinly sliced cucumber to make it crispier. I have never thought of penetrating the skin with salt.
Harumi then ‘tenderises’ the cucumbers by bashing them with the rolling pin. She tears the cucumber in strips; the tearing lends a different texture, adding interest to the dish.
The cucumber strips are marinated in soy sauce, ‘julienned’ ginger, and rice vinegar and at the end, a little toasted sesame oil.
Soy sauce and Mirin are the cornerstone of many of her recipes. Mirin, a sweet liquid with low alcohol, adds a “sweetness and silkiness” to the recipes. It’s pretty essential to buy good Japanese soy sauce as opposed to cheap Chinese soy. It is worth the price difference.
Harumi shows that if it is difficult to get hold of Japanese ingredients, you can adapt. She makes the same sauce with white wine vinegar, “even better” she pronounces.
She leaves the pickles for about six hours explaining that this technique also works well with cherry tomatoes (their skins pricked with a cocktail stick), celery and carrots.
Next we learn to make salmon fishcakes. We mince salmon and a little fresh uncooked prawn very finely with a knife, adding diced raw onion, pepper salt and mirin.
Palming them into little patties, the fishcakes are fried in vegetable oil and served with finely julienned raw ginger strips and Ponzu sauce. These fishcakes are light, not heavy with potato and starch like our fishcakes.
To make Ponzu sauce: you burn the alcohol off some Mirin sauce then simmer for three minutes, the end result a soft sweetness. If you don’t have Mirin, use soy, lemon and sugar. You then add some Kombu seaweed which has had the salty deposits rinsed off to the simmered Mirin. Finally you add soy and lemon juice. It keeps for up to a month in the fridge.
I asked Harumi through her translator if the Japanese still know how to cook traditional dishes, if they are moving towards ready meals. Harumi says there was a period when young Japanese people started to eat takeaways but most Japanese families still know how to cook. There is at present more interest in ‘lunchboxes’ rather than fast food; making your own fresh healthy lunch to ‘takeaway’. Harumi also volunteers teaching young people how to cook traditionally.
When the Japanese want to know how to do home cooking they go to Harumi Kurihara. She makes it look easy. Part of a power couple in Japan, married to a well known TV personality, Harumi’s style is ubiquitous with a hugely successful quarterly food magazine.
At the end one of her team who was videoing the session asked me what I thought of the afternoon… For me it was learning to cook by osmosis, for this is how we all learn to cook, standing next to our mothers and grandmothers, talking and watching. Without even being aware of it, we learn. Being in the graceful presence of Harumi, seeing her handle and cut up food, arrange it artfully but without pretension on a plate was an education in itself.
If you are feeling a little intimidated by Japanese cooking, then I recommend her books as a entry point.
I have a copy of Harumi’s latest book to give away, if you leave a comment and an email address. I will draw winners out of a hat…by the end of September 2009. 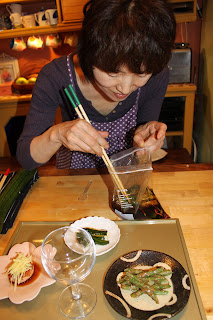