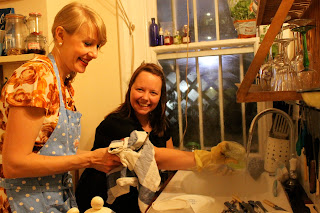 Michelle washing up, Clare the photographer roped in to help… 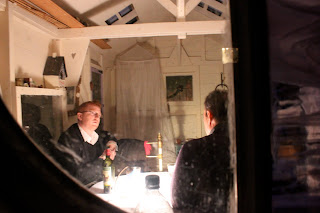 Guru in the shed 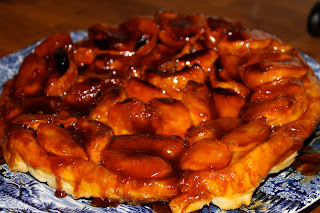 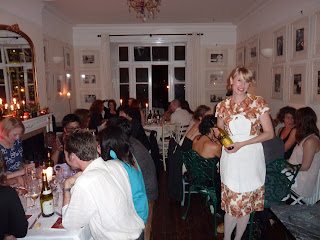 On Friday night Sam and Simon of TenGreenBottles, a small bespoke wine company based in Brighton provided my guests with matched wines. These guys are passionate about Italian wine having spent many years living and quaffing there. These were the wines:

Starter – Cantina del Taburno – Falanghina 2008 (White) Apart from the fact that the bottles were so tall I couldn’t fit them in my fridge (do Italians have particularly deep fridges?), I loved this wine but can’t remember why.

Main – San Giusto a Rentenanno – Chianti Classico 2007 (Red) This is from a very small estate, so a little on the pricey side, but it’s proper stuff, not mixed from lots of different grapes. Earthy, heavy, tannin (I like!), tons of bollocks, ballsy enough to compete with rich mushroomy lasagne.

I am sometimes frustrated by the fact I have such interesting guests who I never get a chance to speak to…
My favourite was Captain H who wore a monocle and is in the Territorial Army.

“I’m a Tory and a hunter” he told me “we have nothing in common. Usually I only ever eat meat but I very much enjoyed the mushroom lasagne”

He graciously announced to one waitress that, despite the difference in class, he would consider mating with her. The word ‘spanking’ was used quite frequently.

Towards the end of the evening, I was standing in the hall with some departing guests when Captain H emerged out of the WC, flung open the door, the toilet seat up, steam rising, stood back and announced

“I think you will all know a gentleman has performed his ablutions here”.

He enjoyed the wines and tried to start a mass singalong of ‘Ten green bottles’ but I was the only one to join in!
His friend Andrew of the Marines had served in Afghanistan. We talked about the situation there and the recent hoohah about Gordon Brown’s letter to a grieving mother. He said that the mother was wrong, helicopters are now a priority.
It seems the Afghan war is unwinnable but Andrew feels that the British are doing the right thing by being there. However, it’s ironic that on duty he found British memorabilia, a wallet, from the 2nd Aghanistan war which we also lost.
The army get very upset when local kids are killed. He recounted an incident in which a helicopter was sent to save the lives of two young village girls maimed in an attack. The army are not supposed to use their equipment to save the locals but they do.
The next day Andrew was going to march in the Lord Mayor’s Parade. I’m hoping to be invited to a mess dinner, with all the extraordinary toasts they use in the navy, fantastic preparation for the Patrick O’Brian themed meal I’m making next February.
Menu:
Focaccia Bread shots
Pumpkin soup with greek yoghurt and tamari roasted pumpkin seeds
Wild mushroom lasagne with basil and cream
Rocket & watercress salad with soft herbs (tarragon, parsley, coriander)
Tarte Tatin and homemade Salted Caramel and Vanilla icecream (the second night with caramelised pecan nuts)
Coffee and After Eights
The secret of a good lasagne is not to use too much pasta…so it’s not too stodgy. I included porcini from Italy, chestnut and field mushrooms for the filling.
The icecream was one of the best I’ve ever made, much improved texturally by the icecream attachment for my Kitchenaid mixer.
After Eights provided chocolates for the guests. I loved After Eights as a kid, slipping downstairs early in the morning to see if my parent’s dinner party guests had left any in the envelopes.
As for the lady guests, some wore beautiful dresses but I forgot to photograph them.
One lady closely questioned me on the subject of taxes, alcohol, food hygiene and fire exits. I’m not sure why people do this. I expect they can’t think of anything else to say but it makes me quite tense especially when I’m tired at the end. I start to wonder who they are, and what they are going to do to me. It turns out she’s a fire inspector and her friend was a police woman. She said that I’m ok because it’s ground floor and any smokers will smoke outside in the garden. However other supperclubs who allow smoking in upstairs flats need to be careful.
As she left I said laughingly

“lovely to have you here…what is your name so I can make sure you don’t come again!”

It turns out her comments were prescient because my freeholder, with whom I have been in dispute for years due to lack of management, maintenance and accounts for the building, called the Environmental Health Officer and the Licensing officers on me. They came to visit on Tuesday (hence the tardiness of this blog posting). I passed the Environmental health inspection and became clearer on licensing objectives which I will pass to other supperclubs; free drink and people’s own can be consumed, wine tastings are fine but money cannot change hands for alcohol.
Xanthe Edmunds, who is the daughter of famed Soho restaurateur Andrew Edmunds came, wearing a beautifully cut jacket from Toast.
We talked about restaurant customers. One customer found a slug in her salad and complained to Andrew Edmunds as he walked past. Her dad picked up the slug from the lettuce, slung it in his mouth and announced

to the astonishment of the customer.

The tasting with Tengreenbottles was a triumph and we hope to do more. Sam said to me :

“I’m glad to meet someone else who swears as much as I do.” 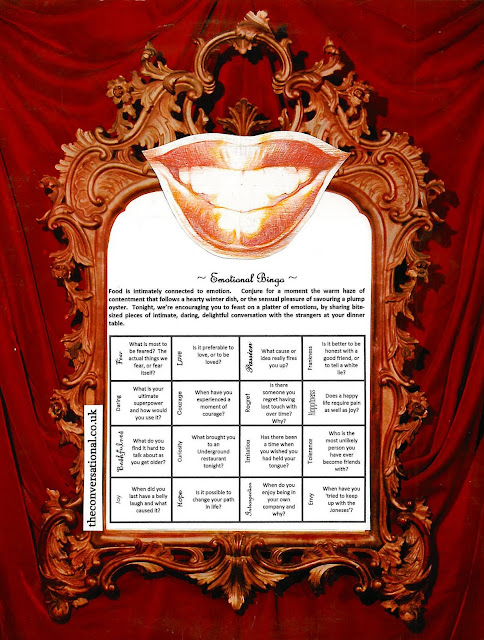 Saturday night, Michelle Newell of The Conversational hosted as well as waitressed. She’d helped the Friday night and all day Saturday too. She observed:

” I had no idea it was so much work. When I’ve been here as a customer, well, the food just comes out. You don’t know what happens in the kitchen.”

Michelle is the most stylish and neatest women I know. She even folds up J-cloths. She actually does what my mum says I should do: she moisturises her elbows.
She made beautiful menus both for the food and the conversation which was made into a graph: ‘Emotional Bingo’. What emotions does food provoke in you? This sparked off all kinds of conversations between guests, leading to a gastronomically and philosophically rich evening.
Continuing the ‘expert in the shed‘ series, we had journalist and film maker Calum Walker, a Scottish guru who can answer absolutely any question. He has a wonderfully calm and laid back demeanor, great at the emotional stuff, a good listener while making the odd judicious point. There was a slow trickle down to the shed all evening. One person spent an hour and a half in there, another declared that they had three lovers and what should they do?
A girl who works for Ed Milliband, Secretary of State for Energy and Climate Change was a guest. She said she might bring him, which would be very exciting. I’d like to speak to someone in government about supperclubs.
I still struggle with portion control…getting each plate to look the same. Getting 25-30 covers out as quick as poss is hard especially when you are cooking in big pans on an Aga. I don’t have much time to plate up. I’m trying to get everybody served before it goes cold, although warming plates in the simmering oven helps. Sometimes I cut it up the portions wrongly, then it looks a bit messy.
It’s also difficult to work out how many guests to let in. There is always a couple of no shows. But you don’t want to overbook in case everyone turns up..
More pictures to come when I’ve made room on my hard drive….