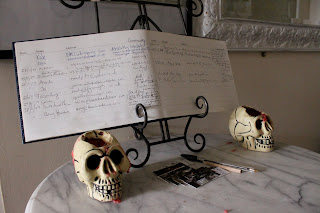 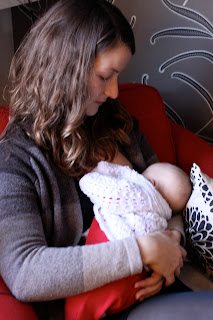 Phoebe feeding…is there anything more beautiful than a mother feeding her baby? 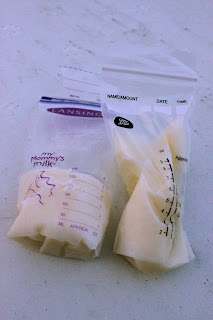 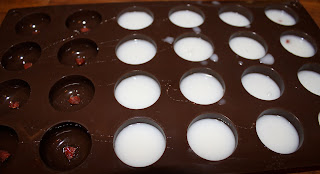 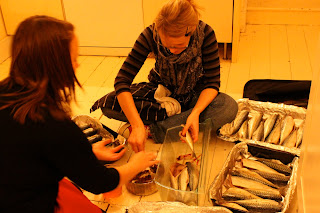 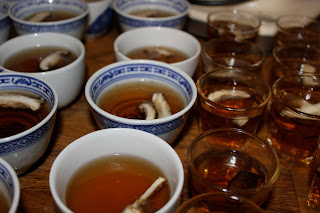 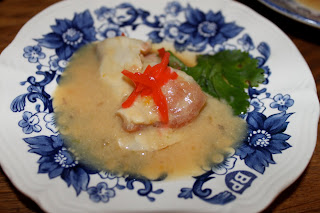 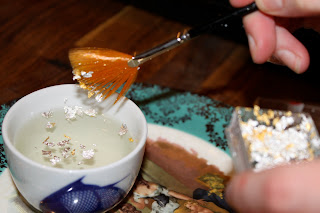 Gold and silver leaf in the sake 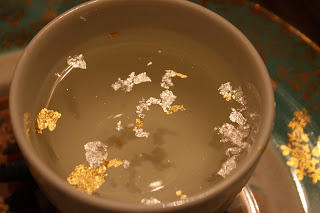 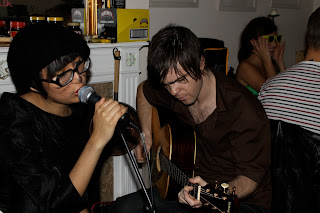 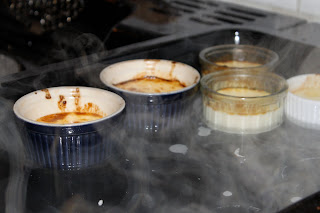 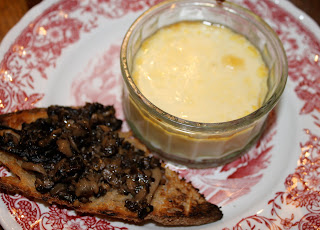 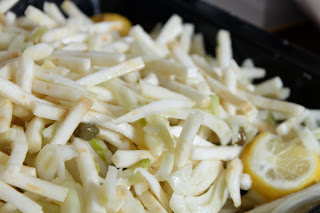 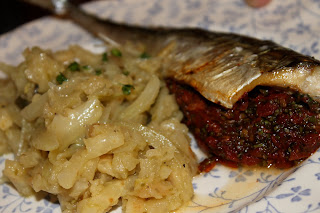 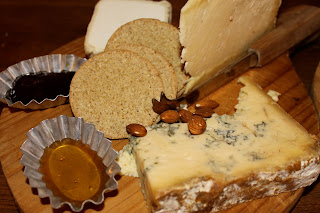 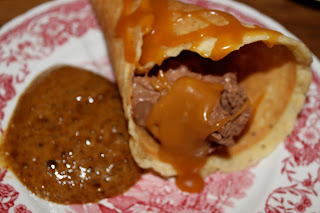 That liquorice foam looks a bit dodgy doesn’t it? 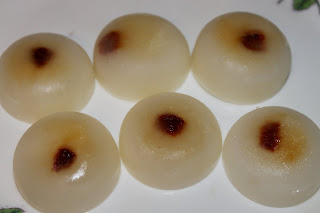 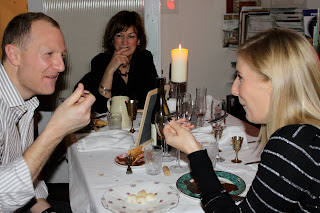 Do we? Don’t we? Oh what the hell…
What is umami? It’s the fifth taste after salt, bitter, sweet and sour, discovered in 1908 by Japanese scientist Kikunae Ikeda, who was trying to define the taste of ‘dashi’, a typically Japanese broth. Chemically, umami is a L-glutamate, which is why MSG (Monosodiumglutamate) makes food so moreish. Umami is a Japanese word (onomatopoeic in that it sounds like ‘yummy’ )and the nearest translation is probably ‘savouriness’.
I realised earlier this year that almost all the food I like is umami: Marmite (naturellement), cheese, tomatoes, anchovies, seaweed, mushrooms, umeboshi plums, soy sauce, seafood, pickles, in fact anything fermented… meat is probably the only umami ingredient I don’t like.
Umami also satiates and produces serotonin; in other words it makes us feel full and happy when we eat. In my research I found it particularly interesting that human breast milk is very high in umami, much higher than cow’s milk or formula. I’m not a scientist but this leads me to believe that umami is somehow necessary for human development. Clearly breast milk had to go on the menu, but who would donate?
I registered for mumsnet and put up an ad. It was taken down within seconds. I asked around for months. One lady agreed but her boyfriend objected. Finally a saviour: Petra Chocstar’s cousins, Lorna and Phoebe, had recently given birth and even better, were willing to donate!
It’s a controversial ingredient. Most people’s reactions both in real life and on Twitter, ranged from ‘ew‘ to ‘no to breast milk. It feels quite wrong to me… cannibalistic even..‘ to the extreme ‘I’m going to open an underground restaurant and serve a cum sandwich.See how you like that’ and even further ‘I don’t care if it cures cancer and promotes world peace! It’s effing BREAST MILK!! That’s disgusting!’. (Thank you Chris Pople).
While it’s perfectly acceptable to exploit the milk meant for calves, in the process separating mother and child, apparently it sparks outrage when donated by an animal that can give consent, the human female. The aversion might be centred around that it reminds us that we are, in fact, animals. When I was breastfeeding, especially having to ‘express’ milk from a pumping machine, I did feel like a cow. It brought home to me that society’s sexualisation of breasts meant that we’d forgotten the basic function of them…to feed our young.
Vegans are very pro-breast milk: PETA, the animal rights activists suggested that Ben & Jerry’s icecream use human milk rather than cow. Not so weird actually, for there is an icecream company that does precisely that. Breast milk recipes can be found at this link, the aptly named site Land of Milk and Honey. 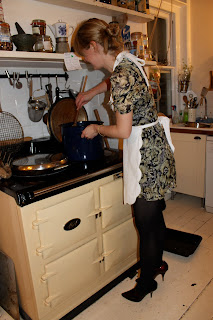 On Twitter I discovered up and coming culinary star Signe Skaimsgard Johansen (@scandilicious). She too is an umami buff and agreed to help me devise and cook a menu for a special Underground Umami night. Signe was a stagière at The Fat Duck lab, has trained in Japan and at Leith’s cookery school. An academic, specialising in fermented foods such as bread and cheese, Signe has contributed recipes to The Bumper book of Marmite, The Ultimate Student cookbook (soon to be reviewed) and will be teaching at the newly set up School of Artisan Food in Nottinghamshire.
Wakana of Akashi Tai came to help out with front of house plus provide free sake tastings for my guests. In the kitchen Wakana suggested a private tasting with some aged sake (2002) which matched impressively with the cheese board. Sake is not in itself umami but, paired with certain flavours you achieve ‘umami convergence’ a food boffin’s term for bloody delicious.
Signe and I decided to add gold and silver flakes (courtesy of @spoon hq) from Laura Santini’s Easy Tasty Magic clever food range to add sparkle to the sake. We also used her Taste No5 Umami paste (and funnily enough I was wearing Chanel No5) to up the umami quotient in the mackerel stuffing.
The menu:
Complimentary Kir royale
A shot of dashi, a shot of Akashi Tai sake flecked with gold and silver, a taster of yuzu, white miso, umeboshi plum, kaffir lime and ponzu marinated sea bass with pickled ginger
Parmesan custard with wild mushrooms on sourdough toast
Roasted mackerel stuffed with sun-blushed tomatoes, Laura Santini’s Taste No5 umami paste, parsley and thyme served with a confit of fennel, celeriac, lemon and capers
Cheese plate from Neal’s Yard: Colston Basset stilton, Stawley goat cheese and Gorwydd caerphilly, orange blossom honey, chilli jam from Italy, almonds and oat cakes.
Chocolate fizz pop icecream served in cinnamon and cardamom cones with Marmite butter caramel and liquorice air
Mother’s milk
Coffee
Marmarati goodie bags
One of the great things about collaborating with others is you pick up tips. As we prepped and cooked through the day on Saturday, Signe shared both old wives’ tales from her Scandinavian background and professional knowledge. After removing the mackerel bones with tweezers, she suggested using cheap vinegar to remove the fish smell from our hands and chopping surfaces.
I prefer to use wooden chopping boards rather than nylon. Wood is a natural disinfectant and heals itself from cuts. Sig told me a trick: especially on wood used for meat, sprinkle a thick layer of salt on the boards, leave overnight and discard the salt in the morning. This thoroughly disinfects the wood and prevents it from buckling from moisture. 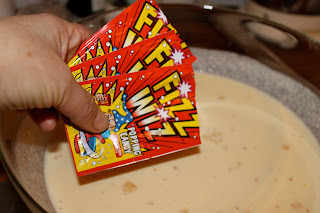 Fizz Wiz in the icecream
The standout dish for me was the ceviche style yuzu-marinated seabass, a classic Japanese dish to which I added both fresh Kaffir lime and ordinary lime. This is definitely going on the menu for future dates. I adore ceviche, ate it all the time at street stalls in Peru (where it was paired with sweet potato) and this Japanese take on it hit all the right taste receptors.
As for the breast milk, I decided to keep it simple as I only had enough for a mouthful for each of my guests. I froze it in little breast shaped chocolate moulds with a goji berry representing a nipple. The guests were remarkably open-minded, all but two ate theirs. How did it taste? Subtly sweet… 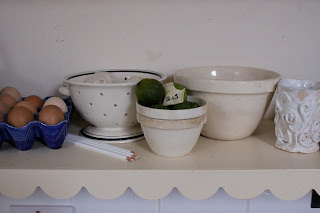