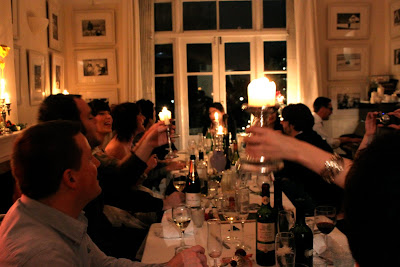 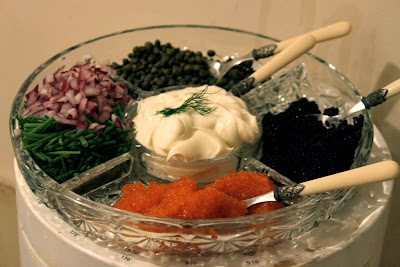 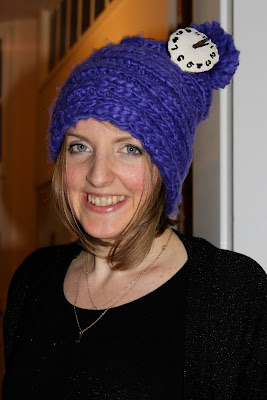 Jo made her own hat for the evening

Hmm what to cook for New Years Eve? I already had some great London smoked salmon from Forman & Field. Inspired by the icy cookbook Snowflakes and Schnapps by Jane Lawson, I served generous portions with a platter of garnishes…capers, creme fraiche, chopped chives, dill, diced red onion, black and red roe and slices of lemon for starters along with home-made blinis. (1)

New Years is often a time for healthy resolutions, so I combined this rich meal with a couple of salads…vine tomato and mozzarella; rocket and lambs lettuce with sprouted alfalfa, mung beans and hot purple radish sprouts.
Still I didn’t know what to cook for the main course…. Looking through my little book of recipes, there was a hand scrawled one from my daughter’s grandmother on her father’s side. On trips to see his family in Lyon, I grew to love quenelles, a kind of rugby ball shaped dumpling, a speciality of the region. Traditionally they are made with pike ‘quenelles de brochet’, a bony river fish which used to be abundant in the two rivers that traverse Lyon, the rhone and the saone. They also make them ‘nature’ or with salmon. The recipe had no quantities, I searched the internet for more precision. All the mentions of quenelles talked about the shape, which seems to be fashionable for icecream or cream or mousse. There were also more modern adaptations of the recipe which omitted the ‘panade‘, a kind of choux dough that is a step in the traditional recipe. Putting out a call on Twitter I got a few reactions: @josordoni suggested I do the search in French (doh! that worked)
@maisoncupcake asked her uncle in Lyon who confessed that they just buy them at Carrefour. When he asked people in Lyon how to make them, they replied:“Oh la la what a question? Why? was the first response. They are hard work. We don’t make them, we buy them. There are only a few rocket scientists in Lyon who can make them. Then they argued about what went into them, and Simone said she used to make them when she was a little girl when the war was on”
@culinarytravels sent me this recipe from The Complete Robuchon
Cooking 1 hour
The quenelles must be prepared at least 2 hours in advance. (I would do it the night before, letting the mixture rest in the fridge)
Quenelles:
300g raw, boneless pike flesh (very cold)
200ml milk
25g butter
75g flour
3 large eggs + 2 egg whites (very cold)
25g butter, clarified
freshly grated nutmeg
1 sprig thyme
2 garlic cloves, peeled
coarse salt, salt and pepper
1) Check the pike flesh carefully and discard any small bones you find. Refrigerate.
2) Begin to prepare the quenelles; combine the milk and butter in a saucepan. Season with two pinches of salt and a dash of pepper and bring to a boil. Turn the heat down to low and vigourously stir in the flour with a wooden spoon, until the mixture pulls away from the side of the pan. Whisk in one egg and finish stirring it in with a spatula. Remove the pan from the heat and allow to cool to room temperature.
3) In a blender or food processor, blend this mixture and the chilled pike flesh. Blend in the clarified butter. Season with two pinches of salt, a dash of pepper and five pinches of nutmeg and blend again. With the motor running add two eggs and two egg whites. Refrigerate this mixture (and the two spoons you will use to make the quenelles) for two hours.
4) Form and cook the quenelles. Preheat the oven to 200C/Gas6/400F. Bring 3 litres of water to the boil in a large pan. Lower the heat so that the water just simmers, then add 1 1/2 tbsp coarse salt, the thyme and garlic. Prepare the quenelles: take a chilled tbsp of the chilled mixture from the refrigerator and use the other chilled spoon to roll it into a roundish tapered shape. When all the quenelles are shaped, gently lower them into the simmering water and poach for seven minutes, until they are quite puffed up. Remove with skimmer or slotted spoon.
6) Butter a porcelain baking dish and lay the quenelles in it, in a single layer, leaving space in between them. Cover with sauce and bake for 20 minutes.
7) Serve. 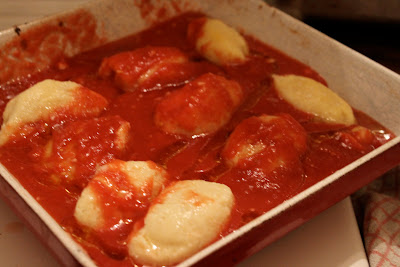 Waiting to go into the oven…
The above recipe called for a velouté sauce but it’s usually served with a crayfish sauce Nantua. I mixed the quenelles with emmental and covered with a tomato sauce. The hardest bit is making the panade, it’s physically tiring work stirring the dense flour mixture (dite l’assechement du pate) until it comes away from the sides of the bowl. I wasn’t sure that the final dish was good enough to serve to the paying public. So I made a gratin dauphinoise, thick with cream and fresh bay leaves, but also offered the dish of quenelles to my guests, asking their opinion which was overwhelmingly positive.
One of the guests played piano, singalongs frequently broke out. Candles were held up for, of all things, a rendition of Take That songs!
For dessert I served three shot glasses: chocolate mousse covered with gold dust; lemon posset topped with a crystallised violet and rose flavoured icecream. What an idiot! One of the shot glasses was so narrow, the guests couldn’t get their spoon in it and had to use the other end, the tip. So much for my fancy plating…
It was a great night…people hugged and kissed at midnight and sung Auld Lang Syne. I stayed up until 3.30am chatting away…The Teen did some filming. We didn’t wake up till 2pm the next day, the flat was still a state. 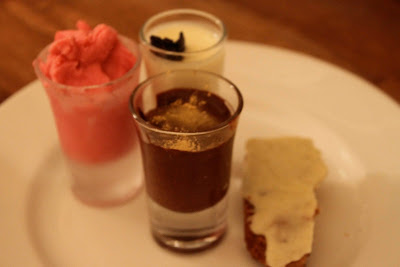 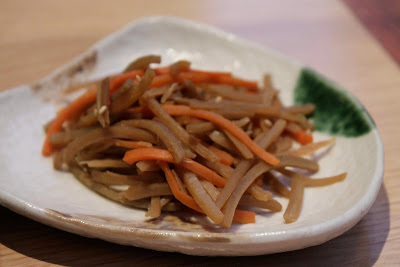 Burdock and carrot salad
I got a call from my friend Les (Bellaphon) asking me to go down to Soho for some Chinese food. We ended up going to a Japanese restaurant Abeno Too that served okonomiyaki, something I’ve wanted to try for a while on the recommendation of @scandilicious. It’s supposed to be a Japanese pancake, cooked in front of you. I’ve got to say, on this outing, I wasn’t too impressed. It was fairly tasteless. The process was interesting, the neatness and presentation of the cooking but it was more like Japanese bubble n squeak with rice replacing the potatoes. Les and I were resorting to mayonnaise (Japanese mayonnaise is delicious) to give it some oomph. We had some braised mackerel and needles of burdock root as sides. The udon with umeboshi plum was good but I wouldn’t bother with the obiwankonobi again. Also at just over £70 for the two of us, it wasn’t cheap. 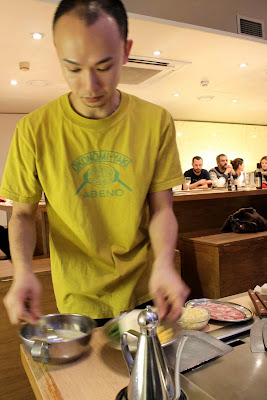 It’s prepared at the table on a central hot plate… 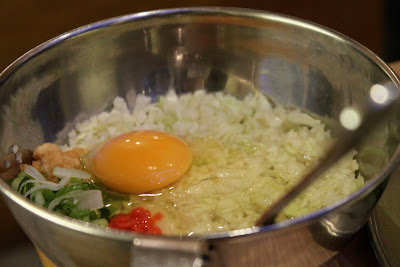 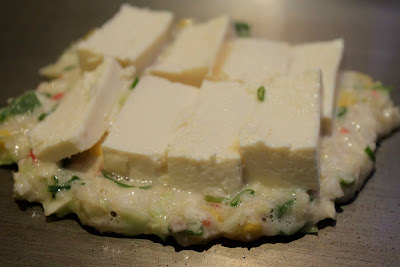 I had it with tofu, it was afterwards covered with more of the mixture 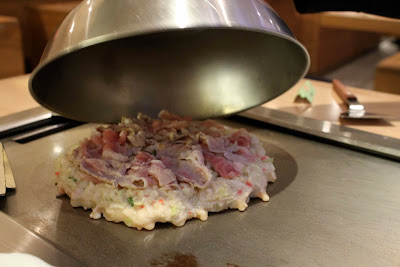 This is Les’ pork and cheese version. They are then covered with a lid to steam 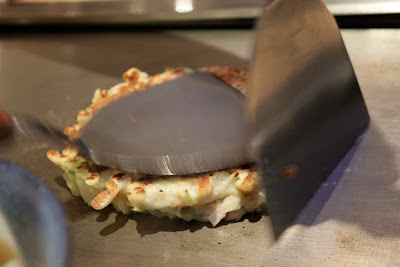 Patted into place, allowed to brown both sides… 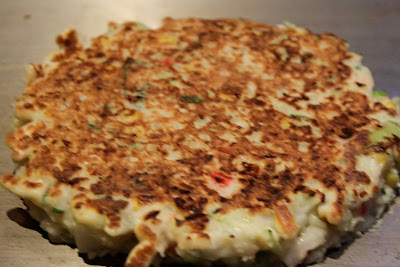 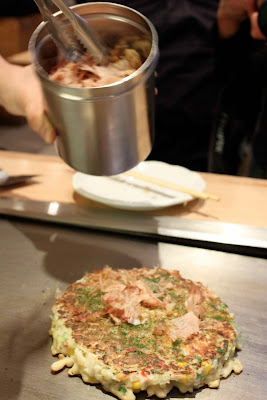 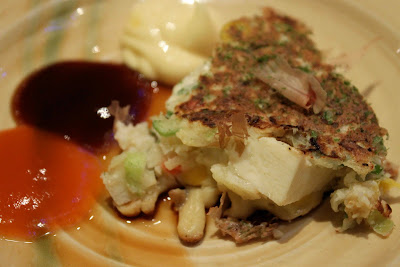 The final dish with Tonkatsu sauce, sweet chili sauce and Japanese mayonnaise
Afterwards we walked around Chinatown in Soho. The Chinese food that used to be served there, and is still a staple of your average Chinese takeaway, explained Les, is from Southern China, Cantonese food. The Cantonese, being poorer, tended to emigrate more, and most of the original Chinese restaurants were run by them. Nowadays people come to Chinatown for more interesting types of ‘oriental’ cuisine. We passed the Tokyo Diner, a shocking incursion of a Japanese restaurant into the area, when it first opened fifteen years ago. Outside there are notices telling you not to tip, it is not Japanese culture, even considered offensive; they also ask you to tell them before you pay, if you have a complaint.
We also gazed through the window of a tiny Dickensian corner shop watching the ladies rapidly make Beijing dumplings Jiao Xi, which, in the States they call pot stickers. Beijing dumplings have thicker pastry than dumplings made in Southern China (Canton). The menu also included something they still eat in Asian restaurants…’spam’.
Walking around, Les pointed out the restaurant liked by critics such as Charles Campion and Fay Maschler Mr Kong on Lisle Street; the bloggers fave ‘Leongs Legends’ where you can get soup dumplings Xiao Long Bao (in Mandarin).Les declared that this restaurant had ‘a degree of authenticity’. Les’ technique of eating these delicate dumplings is to carefully put it, without puncturing, onto his spoon, then make a hole allowing you to drink the soup, then, eat the dumpling. Others, such as Hollow Legs, who possess asbestos mouths it seems, wolf them down in one gulp.
Dim Sum was originally breakfast food but has become a meal you eat later and later in the day (now it’s a late ‘tea’ at 5 pm). Westerners, remarked Les, tend to choose 80 percent fried Dim Sum and 20 percent boiled. This is bad for the digestion. Orientals (if I may use that term to distinguish them from Asians from the Indian sub-continent) will choose food that is half fried, half boiled or steamed to aid the balance of Yin and Yang. You should always drink tea with Dim Sum.
The problem for me is that most Dim Sum, in fact the majority of Chinese food is made with meat stock. Les said that even if the dish said it was made with, say, fish, it would contain pork and that the waiters would lie to me. It’d be great if one restaurant made vegetarian Dim Sum.
Having talked about my forthcoming meal ‘In the realm of the senses’ in which I was looking for particular smelly food, Les introduced me to Chinese chives. They really stink. Of excrement. But they taste great either in salads or cooked.
Les’ pick of restaurants in Chinatown included ‘Wan Chai corner’ and ‘Taste of Beijing’ further north where you could watch the cook stir fry generous helpings of modern Northern Chinese food through the window: two woks and a central running tap to cool the woks and rinse them between dishes. Les also talked to me about Sichuan restaurants Bar Shu advised by Fuschia Dunlop, who is the first European woman to qualify as a Sichuan chef.
I really have much to learn about Eastern cooking and Les was the perfect tour guide. 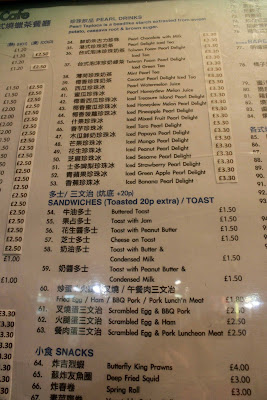 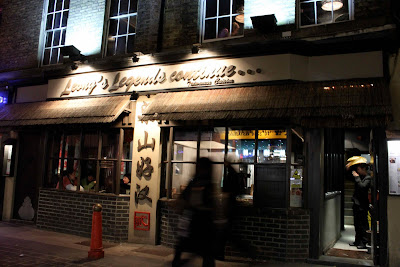 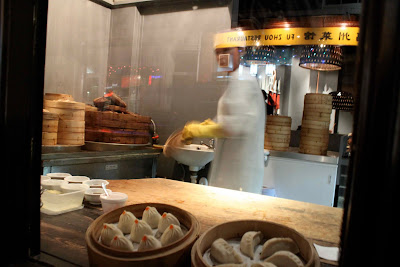 These soup dumplings are traditionally crowned by crab roe (but that’s very expensive) to make the ‘nipple’. 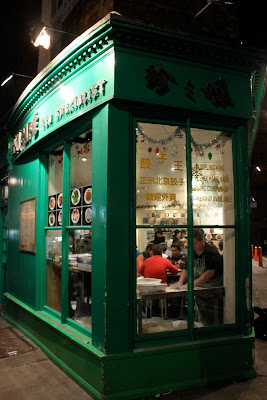 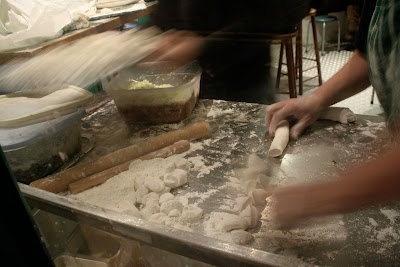 Dumplings are made rapidly with a cleaver, used for just about everything in Chinese cookery.
(1) By the way I forgot a whole step in the blinis recipe last time…still worked though. With the rest of the eggs, the white, you must whip them into soft peaks, add them to the mixture and leave another hour. This makes the blinis a bit puffier.

Previous Post: « Christmas Day: my struggle and subsequent victory over the Lochness monster
Next Post: New events and The Underground Farmers & Craft Market »