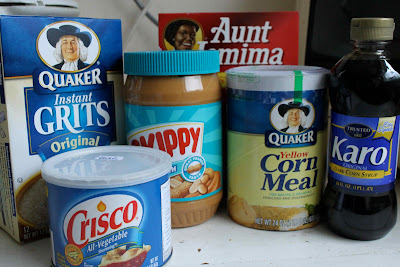 I love the packaging on American foods…

I’m working on the Elvis menu for Friday night 8th January, his 75th birthday if he’d still been alive.

I’m using two books: ‘Eating the Elvis Presley Way’ by David Adler and ‘Fit for a King, The Elvis Presley Cookbook’ by Elizabeth McKeon, Ralph Gevirtz and Julie Bandy.
I’m having to figure out some American cooking terms such as broil which is grilling but underneath, to scallop which is to bake food in a casserole dish with sauce, and of course drinks are ‘beverages’ and measurement are in pounds, cups or sticks. Many American recipes include instant food: for instance you’ll often see: to make a cake, take a pack of Betty Crocker cake mix then add Betty Crocker icing.
My parents have a house in Florida. I was making some Margarita cocktails and boiling some sweet corn in a salt and sugar mix for the barbecue and these middle-aged women, wives and mothers, starting whispering to each other “did you see what she is doing? She’s making margaritas without a mix! Look how she’s doing the sweetcorn”. I realised that they simply never cooked, certainly not from scratch. I understood though, it was so hot, you’ve spent all this money on cooling down your house with air -conditioning, why would you want to heat it up again? Making a barbecue outside in the summer heat of Florida was a mosquito ridden nightmare. Nobody had much of an appetite either.
Elvis’s food was southern ‘comfort’ food, basics like corn and squash deriving from Native American culture. Corn is very important to American cuisine: it’s used for liquor (Bourbon), syrup (corn syrup), bread, as a vegetable, as a porridge ‘grits’ and, was sometimes treated with lime to make it easier to digest.
Southern cooking was a shared heritage between both blacks and whites despite other differences: white southerners living in other parts of the States would often go to black restaurants to eat the cooking of their childhood.
Elvis grew up in poverty, but at Graceland he had a cook. Despite possessing a grand dining room, he usually ate in the ‘jungle room’ which was furnished with Kon Tiki chairs, rabbit fur throw pillows, fake fur lampshades and a waterfall. He also frequently ate in bed. Hmm I suppose some people could eat in my bed if they wanted…
Graceland dining style included towels rather than napkins, gold plated glasses, and all the food should be cut up into bite-size pieces. The TV was always on during the meal. Elvis loved butter and salt. He preferred his food over-cooked. As David Adler writes:

“Coincidentally, Elvis’s favorite word of endorsement was ‘burnt’. ‘That’s burnt, man’ he would say, which could indicate either a good steak or a good performance”.

You have to remember that this is a guy that died from his distended and blocked intestine splitting open inside of him whilst on the toilet. I think the official inquest called it ‘strain’. He lived on fat, sugar, salt and pills (I’m afraid guests will have to provide their own prescription medicines. Elvis took quaaludes, Valium, Valmid, Demerol, Amytal, Nembutal, Elavil, Aventyle, Codeine and Sinutab). While I do hope that no one dies on the loo (we’ve only got one) this is the effect I’m trying to recreate.
I haven’t fixed upon the menu but this is what it’s shaping up to be:
Bottle of Bud
Fried peanut butter and banana sandwiches.
Fried dill pickles
Glass of Milk or buttermilk
Cornbread.
Candied sweet potatoes
Sweet Corn.
Grits with cheese
Fried collard greens.
Blackened catfish (Vegetarian hot dogs for veggies)
Fried fries.
Home-made Baked beans.
7up salad.
Ketchup (classed as a vegetable for these purposes)
Mustard (ditto)
Relish (quite healthy)
Cherry, apple and pecan pie.
Bourbon and coca cola jelly
Coke and Root Beer £1 a bottle
One of the interesting aspects of Adler’s book is the attitude to food in 1950s America. Pre-packaged food was considered more modern, more cutting edge, than traditional, baked from scratch Southern cooking. Many recipes came from the back of packets. The Atomic bomb was also influential: radio- active colours, oversized food, food that was so processed as to look plastic. Elvis was even called ‘The nation’s first Atomic Powered singer’. In the 50s, the attitude of the American public towards nuclear bombs was not yet coloured by the environmental activism of the 60s; they were convinced by the authorities that this technology had hastened the end of the second world war.
Adler also points out that many of the Elvis sightings since he died were in “food related circumstances – grocery stores or fast food restaurants.”