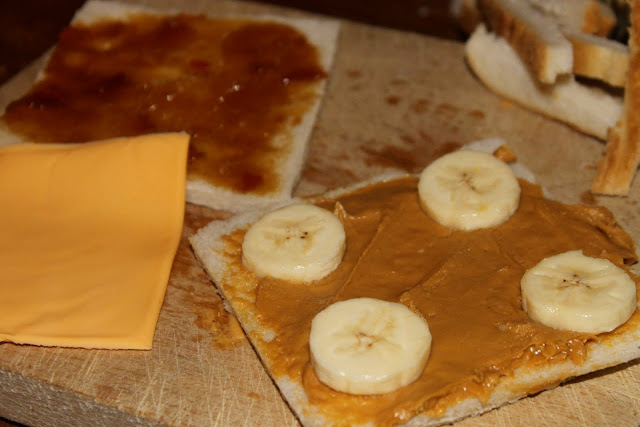 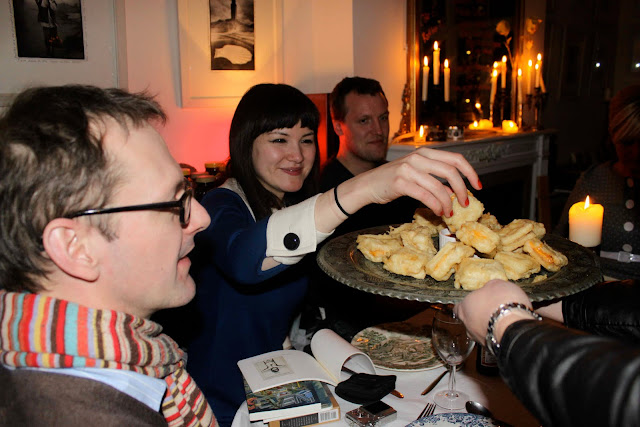 Deep fried in tempura batter, I feel I am on the cutting edge of sandwich technology 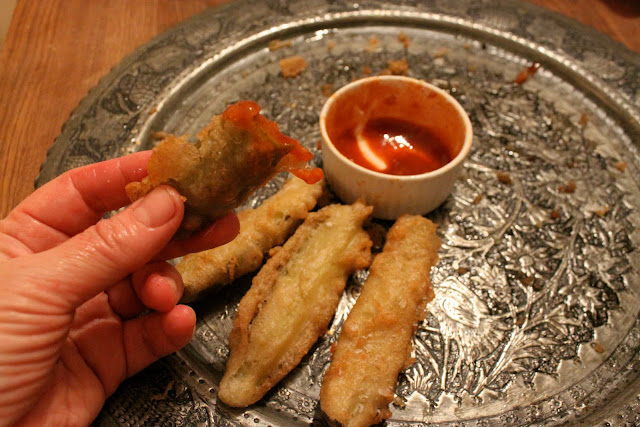 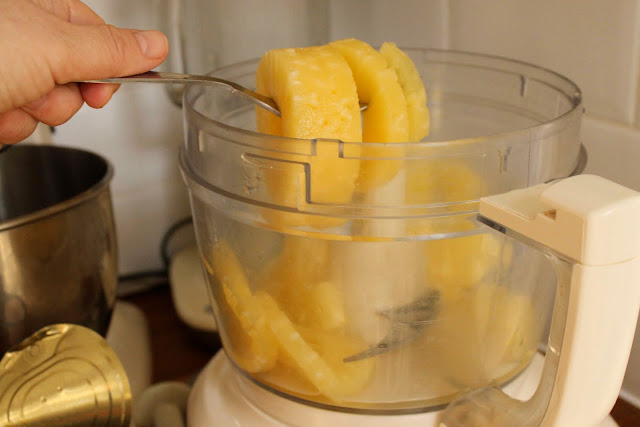 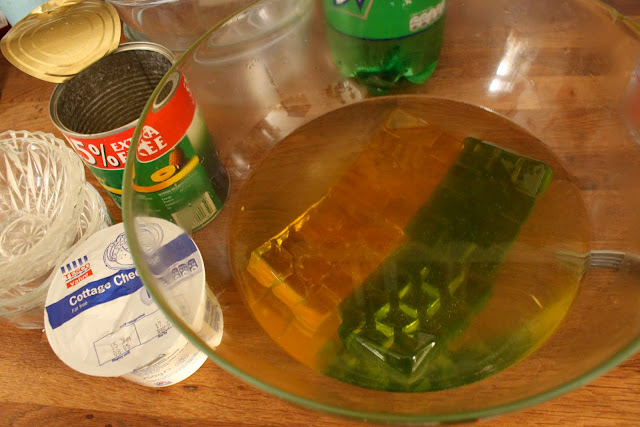 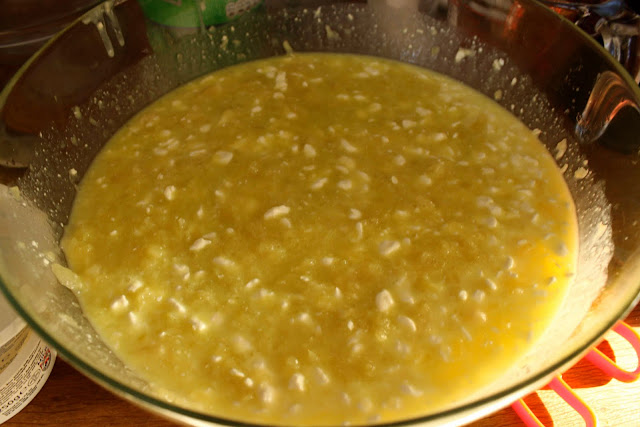 Recipe at the end 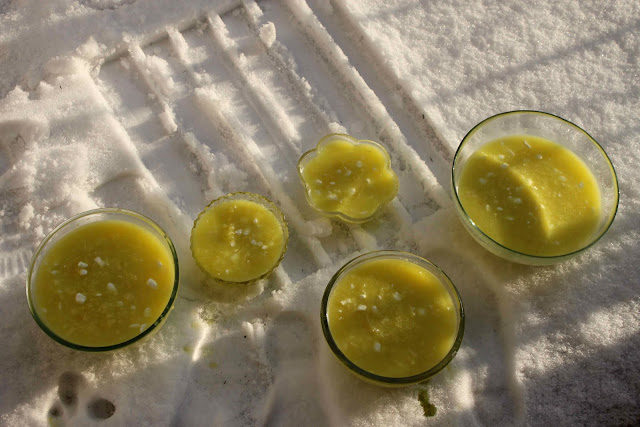 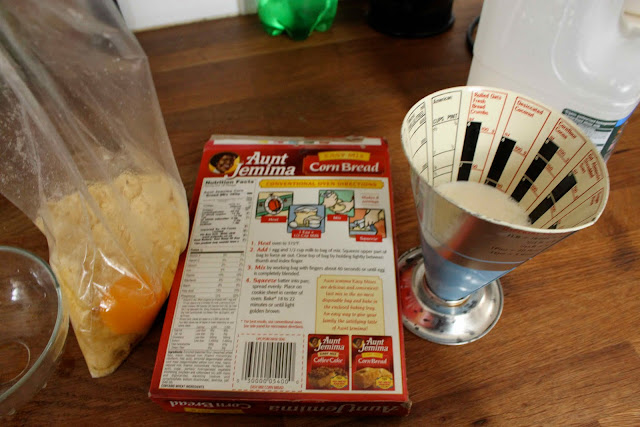 Aunt Jemima’s cornbread mix: NO MESS! You can mix it in the bag provided, just add an egg and half a cup of milk. I tried this out before I did a ‘from scratch’ version. 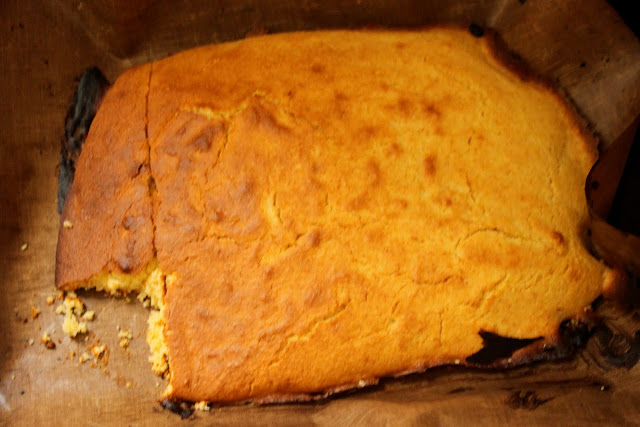 The Aunt Jemima Version, slightly metallic after taste and a bit sandy but the important thing was that there was NO MESS! 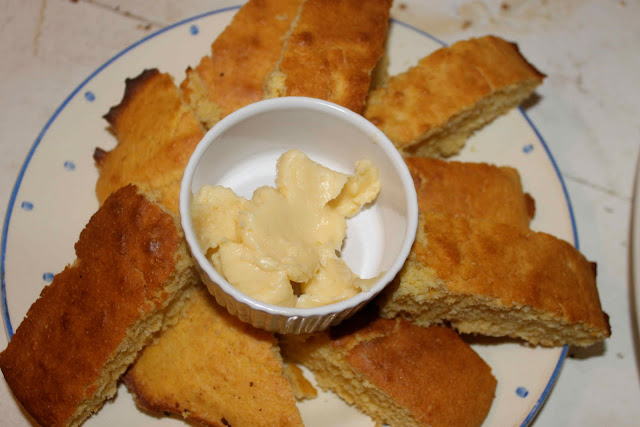 My version, served with butter whipped with honey. The sandyness seems to disappear after a few hours. 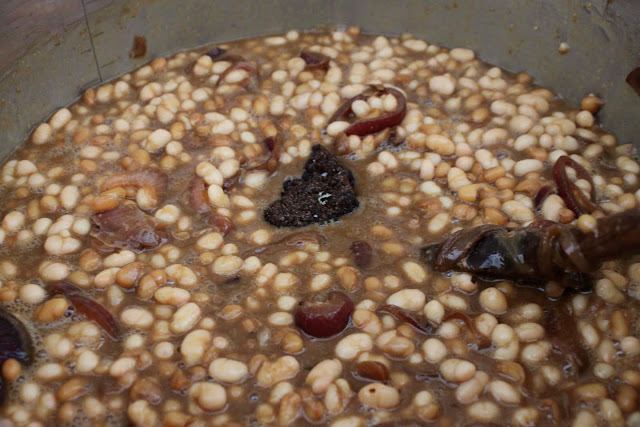 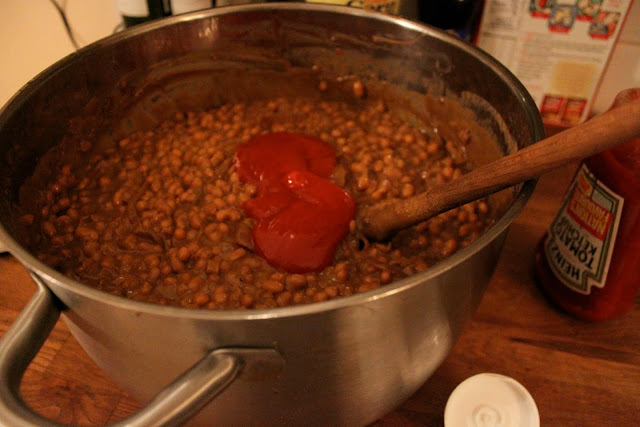 Once they’d cooked down a bit…ketchup is a major ingredient
That Neil Rankin, him of the snooty Michelin star ways, was laughing at me, laughing at my 7up ‘salad’…but I showed him!
Neil used to own and run a sandwich shop chain. Highly successful, he got bored and decided to train up in his first love, food. He’s done the Tante Claire cookery course and has done ‘stages’ for several posh restaurants. He’s currently working at a Michelin star restaurant in the countryside. For some insane reason best known to himself, he offered to come and help me prep for the Elvis dinner and make a dessert.
At the beginning I always try to do a little talk about the meal. On this occasion it was refreshing to be able announce at the beginning

But guests LOVED the teensy deep fried peanut butter, processed cheese and banana sandwiches. I decided to fry them in tempura batter so that they wouldn’t soak up as much oil.
As Neil and I were prepping these, I said to him

“and you thought you left the sandwich world…”

Neil looked rueful and, I might venture, a tad despairing.
Guests didn’t much like the deep fried battered dill pickles but us kitchen staff did…especially as Neil had the genius idea to fry them in a beer batter…perfect combination.
Other hits: unbelievably one table devoured all their 7up salad and wanted seconds. One of them did faint later, not on the loo mind…
A woman wrote to me saying she was on a low fat diet .. I said

“you are coming to the wrong dinner love”

Brokeback Baked Beans: when a guest remarked upon their sweetness, I said:

“everything is very sweet, in fact I cut back on the sweetness. The Grits and Cheese recipe called for evaporated milk, I didn’t put it in! The Candied Yams contained Sprite for instance” 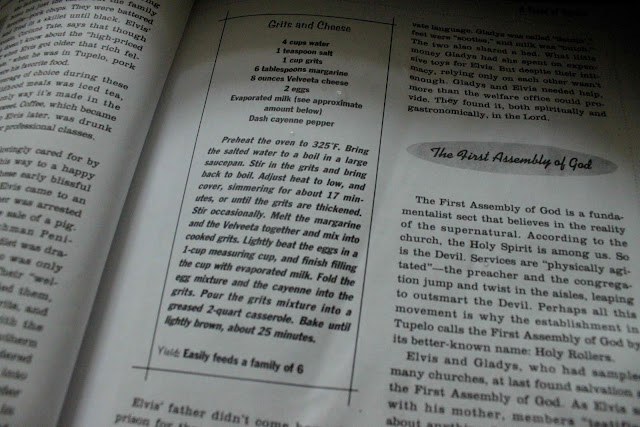 ‘Grits and Cheese’ recipe from Eating the Elvis way cookbook 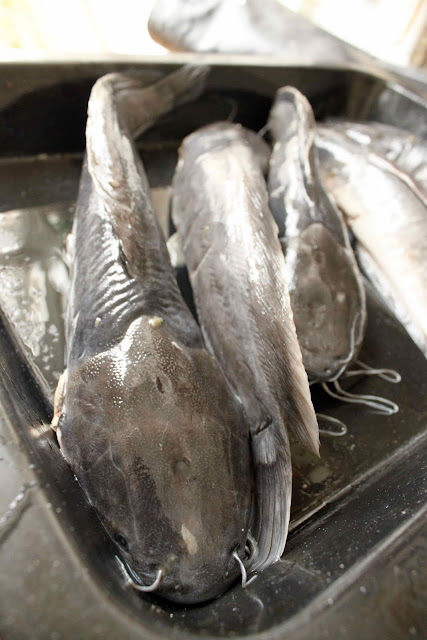 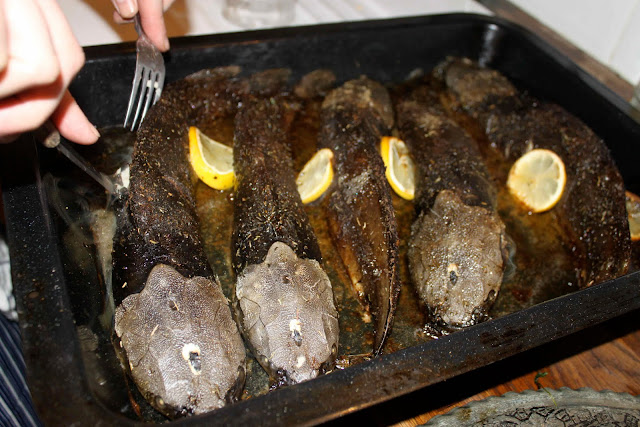 The catfish looked like baby alligators…something pre-historic. One guest looked askance as it was served…

‘is this even edible?’

Hard to obtain in the UK, I finally found ‘yellow cat fish’ at Wing Yip supermarket. Catfish has quite a poor reputation, being a ‘bottom feeder’ people think it tastes of mud. I suppose it got it’s name because of the whiskers. I roasted them whole, slashing them down the sides and rubbing in the blackened seasoning. When I pulled them out of the oven, I was shocked. The heads were a different colour from the body and solid, like God was doodling one day and said to himself ‘I like the design of crabs, but why don’t I stick a fish tail on the end instead?’.
Dubiously (on a wing and a prayer) they were served and…yeah people liked ’em.
Neil’s fancy pants Michelin starred deconstructed American trilogy pie was hard to reproduce on the Aga. Finally he did a simple pie, and we adorned it with shop-bought vanilla ice cream mixed with peaches and chocolate chip cookies… Elvis’ last meal. Unfortunately I can’t show it because I didn’t see it or taste it due to the fainting incident.
The corn bread (recipe from Shuna fish Lydon) was quite sandy in texture. But I left it for a few hours, warmed it up again later and it became softer. I served the cornbread with buttermilk and butter whipped up with honey, the latter a suggestion by @scottcancook who comes from the Southern US.
Hardly anyone drank their buttermilk which is a bit like yoghurt. I felt I had to serve glasses of milk and buttermilk: Elvis drank at least four glasses a day.
I served two shapes of fries; Elvis liked round fries and regular fries. Everything in this meal was historically and medically researched, no random decisions here people!
Cheese n grits: quite nice actually…I flavoured it with a large tub of Dairylea. (My teen was so thrilled with the shopping I did for this menu, a fridge full of junk food!) 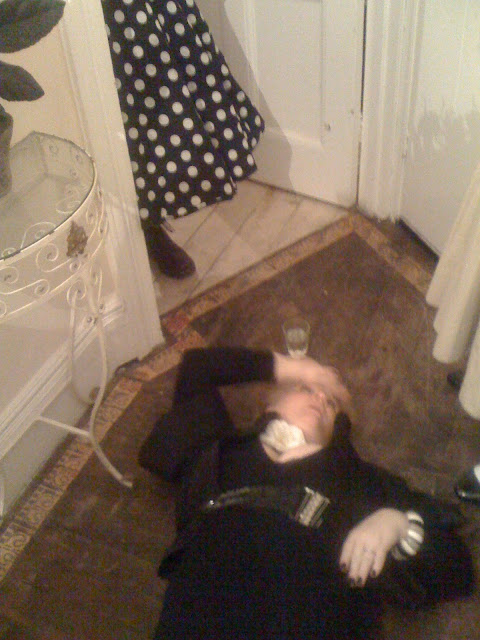 Dying of too much junk food?
Fainting lady was @lisadevaney …I must confess that although I was concerned, I also couldn’t stop laughing…was trying to hide the shaking shoulders whilst trying to prevent her from from falling on the ground…then ruthless newshound that I am…I got out my iPhone and said to her, as she came to…

“Do you mind if I blog and twitpic this?”

A box of Lime jelly
A box of Lemon jelly
A pack of cottage cheese
A can of pineapple (crush)
3 cups of 7up
Melt the jelly, broken up into pieces, in the hot 7up.
Allow to cool and add the cottage cheese and pineapple
Allow to set.

Onion
2 Tins of haricot beans
2 tablespoons of brown sugar
Half cup of molasses
1 cup of cider vinegar
Half a cup of ketchup
2 tablespoons of mustard
A sprinkling of chipotle chili sauce (if you have it, and to taste)
Black Pepper
Salt
Fry the onion,
Add the beans
Add the sugar, molasses, vinegar, ketchup, mustard.
Add the chili sauce, pepper and salt to taste.
Halfway through the cooking, take out some of the beans and crush them up then put them back.
Shuna’s Cornbread recipe
1 cup cornmeal
1 cup flour, all purpose
1 teaspoon sea salt
¼ cup sugar, brown or raw
1 teaspoon baking soda, sift
¾ cup buttermilk
1 each egg
3 tablespoons unsalted butter, melted 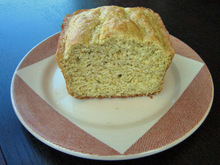 preheat oven to 350°
generously butter a 9” cake pan or various pans
mix all dry ingredients in a bowl, whisk to create a well in the center
in a separate bowl mix together the buttermilk and egg
melt butter
pour buttermilk mixture into the well of the dries all at once
mix this with a spatula/wooden spoon until almost completely incorporated
while mixing gently, add melted butter just until batter is uniform
pour into pan: batter should make the pan 1/2 to 3/4 full
bake until skewer or small sharp knife inserted in the middle comes out clean and sides have pulled away from the pan, approximately 30 minutes
when done baking, put pan on cooling rack for 5 minutes. then turn cornbread out of pan and cool completely before slicing
Cornbread will keep, unrefrigerated for about 4 days
Delicious eaten toasted with honey-butter, pan sautéed, with stewed greens, crumbled into soup, and dunked in cold buttermilk…
If you cannot get your hands on Anson Mills cornmeal (I ordered Yellow Coarse), please please find yourself a bulk section that has fresh organic cornmeal. I made this yesterday in a standard bread pan, but it’s nice in your blacker than black cast iron skillet, (make sure that it has been sitting in the oven for a spell before the batter goes in, or it’s the pan that the sizzling bacon just came out of), or cake pans. Really it depends on the ratio of interior to exterior you desire!
Thanks to Carla of Can be bribed with food for front of house and Neil Rankin of The War on cookbooks for kitchen assistance.